According to MyNorthwest.com, the internationally known former home of Edith Macefield is set to become a vacation rental. Current owner Lois Mackenzie revealed that news about property that Macefield, then 84, famously refused to sell after developers offered her one million dollars beck in 2006. 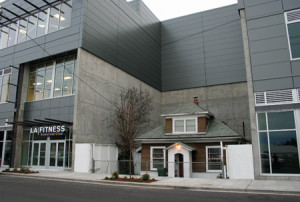 After Macefield refused to sell, developers were forced to literally build the Ballard Blocks around the 108-year-old farmhouse that she had lived in since she was a child. Edith sadly passed away in 2008 and since then then her home has been left untouched and unlived in.

Before she passed away, according to the MyNorthwest.com report, she interestingly formed a unique friendship with superintendent Barry Martin, who was in charge of the Ballard Blocks development. Martin and Macefield reportedly became so close that when she passed away she made him her power of attorney and left all she owned to him, including her home.

Martin checked in on Macefield and would take her to doctor’s appointments and make her meals. He became her care giver and wanted to uphold her wishes of remaining in her home until she passed away. He even wrote a book about their unique friendship called “Under One Roof.”

“All she wanted to do was live the rest of her life in her house and die where she wanted. I thought that was a pretty simple request and I think that everybody should have that opportunity,” Martin told MyNorthwest.com.

Martin later sold the home to Portland architectural designer Mackenzie who named the home Edith’s House at Credo Square. Since then the home has remained vacant.

“We wanted to keep Edith’s house where it was. We decided to clean it up and repair things. Ideally, what we’re trying to do is make Edith’s house a vacation rental or a nightly rental home,” Mackenzie told MyNorthwest.com.

According to the report, the plan is now to do up the home to rent as a vacation or nightly rental. Mackenzie wants to leave Edith’s mark on the home by featuring framed photos and art that commemorates her credo.

Mackenzie has not yet revealed when Edith’s home will be available for rental, but the My Ballard team will be sure to keep readers informed of any new information.