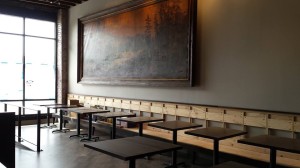 According to Seattle Magazine, new eatery Brunswick & Hunt is set to open at 1480 NW 70th St on Thursday, May 22.

Brunswick & Hunt will feature a 49-seat restaurant with a large back bar manufactured by the Brunswick-Balke-Collender Co. A mural called “The Hunt”, which was found in a tavern in Winlock, will also play a key role in the design aesthetic.

In terms of drinks, the restaurant will be serving up cocktails, brews from eight rotating taps and Northwest wines.

In the food department, Chef Jeffrey Davidson, who previously worked in the kitchens of Ray’s and Bastille, has put together a “truly Seattle” menu that focuses on local produce, nose-to-tail cooking, and small farm sustainable proteins.

Check out the menu below: 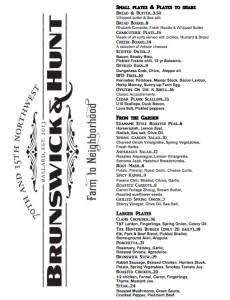 Starting May 22, Brunswick & Hunt will be open from Wednesday through Sunday, from 4 p.m. to around midnight. The team plan to be open daily and start serving brunch in June.

Photo courtesy of Brunswick and Hunt.