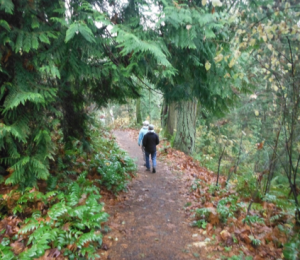 Seattle Parks and Recreation has announced tree work in Carkeek Park to reduce hazards for park users and to avoid damage to salmon habitat.

The work, which began on August 20 and will run through the end of September, will consist of the felling of 13 alder trees, with the tree trunks’ lower portions left where practical as wildlife snags.

In and around Venema Creek between Carkeek Park Road and the Salmon Imprint Pond, there’s been a history of alder tree failures, including an incident in spring of this year, when a 24-inch-diameter alder tree fell on and destroyed the bridge adjacent to the pond. Remaining trees in the area are similar to the one that failed, with problems such as leans, trunk decays, and undermined root systems.

As part of the plan created in collaboration with the Washington Department of Fish and Wildlife, hydraulic lifts will be used to remove 12 of the trees in sections, with the remaining one felled from its base. The use of the lift will limit the amount of woody debris entering the stream, and will help protect the tree workers.

Once the project is complete, Seattle Parks and the Green Seattle Partnership will restore the forested area.

For more information on the work, contact Barbara DeCaro, Seattle Parks Resource Conservation Coordinator, at 206.615.1660 or at barbara.decaro@seattle.gov