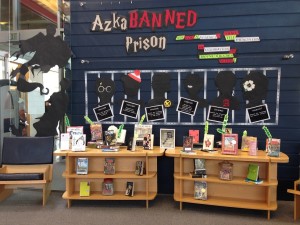 From September 21 through 27 libraries all over the country will be celebrating Banned Books Week. The national event, organized by the American Library Association, embraces the freedom to read by highlighting books that have been challenged and banned every year in schools, libraries and communities.

Banned Books Week is an annual event that celebrates the freedom to read and the value of open access to information. The books featured during Banned Books Week have all been targeted with removal or restrictions in libraries and schools.

Ballard Library is celebrating the event with their very own “AzkaBanned Prison” book display which features a variety of titles including Harry Potter, The Hunger Games, Charlotte’s Web and The Catcher in the Rye.

Check out the list below of some titles that were banned in certain American classrooms this year: