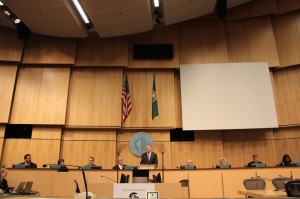 Murray’s proposed budget contained several major reform proposals, starting with key reforms to the City’s budgeting process itself. “We will move toward a performance-based budgeting system and begin paying for outcomes,” said Murray in his budget address to Council.

Check out Murray’s additional proposed reforms to the City’s budgeting process below:

Mayor Murray also announced that he is keen to restructure the way in which Seattle plans for its future. “We will look across departments to establish new best practices of coordinated planning,” said Murray, “so that as we plan, we plan together, and when we build new housing, we are also planning new jobs, parks and transportation to support them.”

Homelessness was another issue that Murray plans to tackle with the proposed budget. The Mayor announced that he has tasked Human Services Director John Okamoto to conduct an audit of the City’s nearly $35 million annual investment in homeless services and to compare City spending against national best practices.

“On any given night, there are at least 2,300 unsheltered individuals on our city streets – and very likely there are more,” said Murray. “It is time for us to learn if a better budgeting approach here in City Hall will create better outcomes for individuals living right now on the streets of this city.”

Murray’s also announced that he plans to fund ‘bold policy experimentation,’ including:

“These budget commitments demonstrate a City government flexible enough to reorganize around our priorities and support new policy that reflects the evolving needs of our communities,” Murray said.

City Council will begin the hearings on the budget proposal on October 2. To learn more about the proposed 2015-2016 budget click here.

Photo courtesy of the Office of the Mayor.