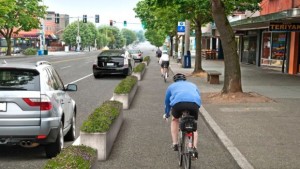 According to our news partners at The Seattle Times, SDOT has once again pushed back the timeline for the completion of an environmental impact statement to offer options that would spell the end of the Burke-Gilman Trail’s “missing link”.

According to SDOT spokesperson Rick Sheridan, the process has been delayed by eight or nine months with a draft EIS set to be published in 2015 and the final version in 2016, because the city switched consultants. The reason for the switch is not known at this stage.

Seattle Times reporter Jonathan Martin writes that because of this setback “the planning alone for the missing link will finally be done nearly three years after the city began the EIS process back in 2013. That means that, for years to come, cyclists in Ballard will continue playing chicken with 50,000-pound dump trucks.”

As readers would already be aware, construction of the Burke-Gilman “missing link” (the 1.5-mile gap in the trail, from Ballard Locks to the Ballard Fred Meyer) has been a hot topic in our neighborhood for about 10 years.

Way back in 2003, Seattle City Council proposed an option for the route to go along Shilshole Ave and through Ballard’s industrial zone. Local businesses (including the Ballard Chamber of Commerce, Ballard Oil, Salmon Bay Sand & Gravel and others) sued the council “claiming the route, which crosses 55 driveways, would put bicycles in direct conflict with trucks,” writes Martin.

The group of businesses won the law suit in 2012, and the city subsequently started the EIS process that was set to look at alternative routes for the “missing link” construction.

The businesses submitted a “Plan B” alternative route that would include a protected bike lane along Leary Way NW and NW Market St (pictured above). The group has a website and submitted a letter to SDOT outlining their plan. In his article Martin agrees with the group stating that “the route makes even more sense today than it did then.”

The businesses’ attorney Josh Brower emphasizes that Plan B is similar in design to the new protected lanes on Broadway Ave E and 2nd Ave. “It’s pure Copenhagen style,” said Brower. “It’s what they’re putting everywhere else in the city.”

Despite the benefits of this route, Martin doesn’t believe that Plan B is perfect and states that some Ballard businesses would definitely object. However, “it has the best chance of being built in the near future,” he writes.

According to Bower, if the city is still in favor of the Shilshoe route after the EIS planning process his clients are set to go back to court. “You could add another three to five years of appeals. Now we’re looking at 2021-22,” Brower told the Seattle Times.