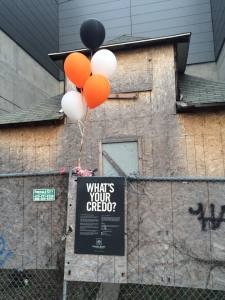 In the wake of the failure of the recent auction, a petition has been created by locals to preserve Edith Macefield’s house.

The petition created on change.org is urging the  Seattle City Council and the Ballard Historical Society to turn the famous home into a museum.

“It’s more than just a house, though. This house is a symbol of defiance,” says petition creator Amanda Allen.

Check out Allen’s message on the petition website below:

In 2006 Edith Macefield turned down US$1 million to sell her home to make way for a commercial development. In my experience, that is unheard of. Why would this elderly woman, who knew she had a limited time on this Earth anyway, turn down so much money just to stay in her home?

It’s because, after her long and adventurous life, she wanted to die at peace in her home. Which she did just two years later, after gaining worldwide notoriety for her refusal to sell and inspiring a movie, and millions of people to “hold on to things that are important to you.”

I hope to see this home turned into a small museum. One that commemorates Edith, and her amazing life.

Edith Macefield was a hero; joining the Service in England after leaving Oregon at far too young an age, then taking care of the orphans of war there to come back here and turn down more money than she’s probably had in her life.

We celebrate and commemorate a lot of silly things. This isn’t one of them.

Over 200 people have signed the petition so far of the 500 that are needed. Click here to sign the petition.