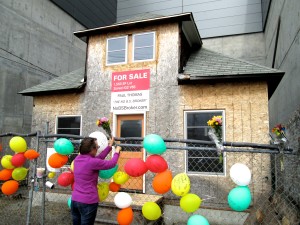 After returning to the bank following the failed March 13 auction, Edith Macefield’s home is now officially back on the market.

The Ballard icon is being sold by commercial real estate broker Paul Thomas, known as the “No B.S. Broker.”

There is no asking price for the famous home, with Thomas confirming that it will go to the person with the best offer. The home is being sold “free and clear” of the liens that deterred potential buyers from bidding on the property at the auction.

Those interested in making an offer must also include a proposal of how they will honor and memorialize Edith Macefield through their purchase.

In terms of the structure itself, Thomas reports that “it has been completely rebuilt! Only the roof and subfloor remain from the original house, everything else is new. It is empty and ready to finish.” New doors and windows have also been installed to bring back some of the original character of the house.

“It’s a wonderful house. The views on three sides aren’t anything to write home about but there is a huge back yard, a surprising amount of light and an palpable sense of history,” says Thomas.  “It is also certainly convenient to nearby stores and the gym,” he says humorously.

Check out the virtual tour video below:

When asked how it feels to list such a well known property, Thomas answers with clarity. “I take great pride in doing what I can to maximize its chance to survive as a memorial to an extraordinary woman,” he says.

Thomas confirms that it is impossible to predict what will happen to the house, with potential buyers ranging from those with creative visions to the developer of the Ballard Blocks.

Unfortunately, due to liability reasons the house is regretfully closed to the public.