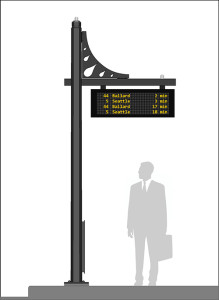 Bus commuters can expect a smoother ride to work or school with new arrival time signs at popular bus stops along the 45th Street corridor between Ballard and the University District. The Seattle Department of Transportation (SDOT) in partnership with King County Metro has been installing 11 new Real Time Information System (RTIS) signs along the busy commuter route since March, a project that is nearing completion.

The LED signs are mounted on poles at each stop, and use real-time data to display bus arrival times. SDOT says the signs will give passengers, “a sense of security that comes with knowing how long you’ll have to wait and whether you have time to run a quick errand or grab a snack.”

SDOT is close to finishing the sign installations, with the majority of the sidewalk and bus stop work scheduled to be completed by mid-June. The remaining work includes connecting wires and testing the equipment, which they expect will be wrapped up by August. SDOT says they’ll be making other pedestrian improvements, including new curb ramps and accessible pedestrian push buttons at select locations. The department says they’ve been careful to maintain the trees and their roots throughout the process; they’ve been able to adjust locations of several concrete foundations to avoid interfering with the root systems to keep the trees alive and healthy.

For the next couple months until the project is complete, SDOT says travelers and neighbors can continue to expect construction noise, intermittent lane closures, temporary bus stop closures, and flaggers and uniformed police officers directing traffic.