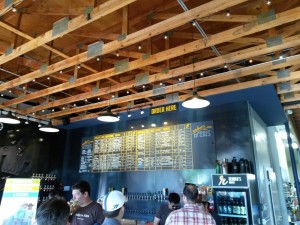 “These last three years have been an amazing ride,” says co-founder and head brewer Adam Robbings. “Even in just the last few months we’ve opened a new brewery and taproom, started working with a distributor, won Brewery of the Year for our size category at the Washington Beer Awards and expanded our taproom hours to be open seven days a week. We feel very lucky and are thankful for the support we’ve gotten from the community and the beer industry, and we’re excited to see what the next three years bring!”

The occasion brings a one-year anniversary beer dubbed “Three Years Gose Fast.” The tart, lemony Gose beer will be available on tap and in a limited release of 300 bottles at the party (limit of two per person). This makes the second brew for Reuben’s sour series, and this particular Gose is brewed with lactobacillus, coriander, and Fleur de Sel.

The first 200 people to have a pint will receive it in a commemorative British pub glass to keep (limit one glass per person). Reuben’s says they’ll also feature some cellar beers, all 24 of our taps pouring Reuben’s for the first time, and a raffle to benefit Seattle Children’s Hospital. Prizes include bottles of 2014 Bourbon Barrel Imperial Stout, brewery swag, and more! The Burgerphenia food truck will also be onsite, serving up some great burgers and fries.

It’s Rock n’ Roll, Bluegrass, beer at Populuxe Brewing (826 B NW 49th St.) this Friday night, August 14th. Populuxe Brewing teams with Cat Haus Sound, and the food truck ‘No Bones About It’ for a last summer concert of their series.

The event is free and family friendly! Check out the Facebook event page here.