Lafferty’s pharmacy (5312 17th Ave NW) has closed its doors as of August 12th. Clients of the friendly pharmacy have been transferred to the nearby Walgreen’s (5409 15th Ave NW).

“I’ve had two two clients transfer seamlessly and have positive experiences,” says owner Michael Lafferty, encouraging his former patients to try this handover at least once. A transferred Lafferty’s patient should identify herself as such when calling Walgreen’s, and Walgreen’s will take care of their prescription fill.

Even still, Michael says the decision to sell has been tough, and explains that the close is due mostly to changes in regulation.

A parallel maritime medication business has been under operation out of the same location. However, permit changes around 2011 demanded new DEA licensing for Lafferty’s, both for the pharmacy and for wholesale to supply a vessel.

Michael says it came down to having to choose which of the two businesses to keep in that location.

For now, the property remains under Michael’s ownership and he continues to work alongside Lafferty’s maritime medication business. “I expect to be there for around five more years,” says Michael. ” But anything can happen.”

Several former clients have expressed nostalgic disappointment at seeing the friendly pharmacy go. “I met the nicest people when I went in there. They went the extra mile always,” says loyal customer Ms. Kennell.

A Yelp reviewer echoed that Lafferty’s consistently provided a positive experience: “I have a special needs adult sister and they always treat her with great dignity and kindness–that counts for a lot to me.”

A short history of Old Lafferty’s 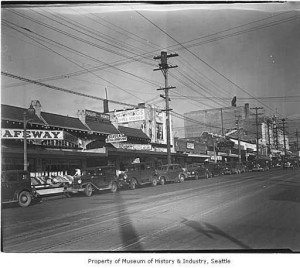 Lafferty’s began in 1928 in a location off 20th and Market St. The current location opened in 1961 under Barry Lafferty, and the two locations were merged into the building neighboring Swedish Hospital.

In 1976, Lafferty’s maritime medication business– which provides medical-survival kits to Ballard’s fisherman– was started by Barry.

The pharmacy and maritime medication business has stayed in family hands and several regular customers of Lafferty’s fondly recall recent glimpses of “old man Barry” sitting in his chair in the pharmacy happily greeting each customer.

Not long ago, our area had seven privately owned, family pharmacies. “Our family has loved Lafferty’s Pharmacy for over 15 years,” says Kennel. “It’s the end of an era.”

The black and white photo above was taken in 1925 on Market St. at the corner of 22nd Ave NW. Original Lafferty’s was built just a couple blocks up, a couple years after. Photo courtesy of MOHAI. Top photo Google Maps