Drivers and commuters are being asked to plan ahead for the construction work that will reduce both directions of State Route 99/Aurora Avenue North by one lane between the Aurora Bridge and just north of Mercer Street.

The median lanes in each direction are set to close for four to five weeks starting Monday evening, January 18.

Contractor crews working for WSDOT need access to the median lanes to build four large sign foundations for the future SR 99 tunnel. The work was originally scheduled for spring 2015, however, it was changed to January 2016 to lessen the traffic disruption. According to WSDOT, the change was implemented as winter months typically see lower traffic volumes.

“These signs require sturdy, concrete-encased pedestals along with communication lines, power lines and traffic sensors, which is why the construction work in the median will take at least four weeks,” says David Sowers, deputy administrator of the Alaskan Way Viaduct Replacement Program.

“We understand this will inconvenience drivers and commuters, and we are working closely with King County Metro and the Seattle Department of Transportation to minimize traffic impacts as much as possible,” Sowers continues.

During the first phase of this two-phase project, when construction starts and the median lanes are closed, the southbound bus-only lane will open to all traffic. Drivers should use caution since buses will travel – and stop – in the lane with other vehicle traffic.

Check out the map and specifics of the construction timeline below: 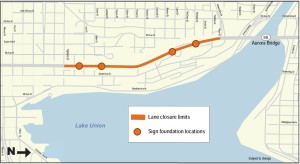 Drivers and bus riders are encouraged to plan ahead as additional congestion is expected on Aurora Ave N. Consider alternative travel modes such as ride-sharing or carpooling, or traveling in off-peak times.