Sound Transit has unveiled its next proposal for light rail expansion: $50 billion worth that would connect Everett, Tacoma, Redmond, Issaquah, West Seattle and Ballard. Here’s the map and list of projects (.pdf)

But there’s a catch. The Ballard leg is slated for 2038. (Do yourself a favor and don’t calculate how old you would be.)

Here’s how Sound Transit describes the proposed line to Ballard: 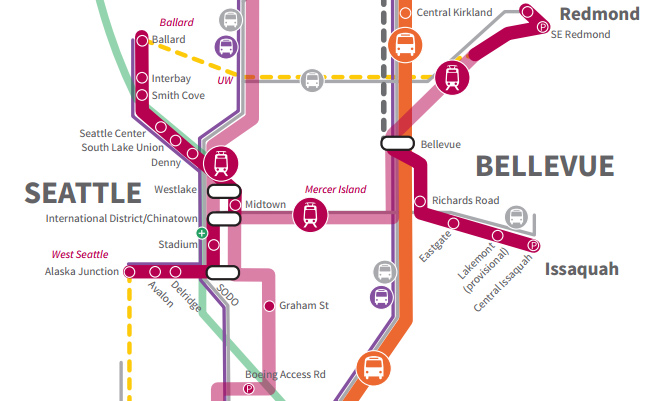 Adds the Sound Transit Blog in a very good overview:

From Westlake, trains would run undergound to Queen Anne with stations at Denny Way, Harrison Street, and Seattle Center. From there trains would emerge and run at-grade through Interbay, with stations at Smith Cove, Interbay (likely at Dravus Street), and terminate at an elevated station at 15th/Market in Ballard. The train would cross the ship canal in a new drawbridge that would only open in off-peak hours, with ST working with the Coast Guard to limit openings as much as possible.

For those who have criticized Sound Transit for being too conservative with mass transit over the years, the new proposal is much more aggressive. “The debate over light rail is over. We are building a system north, south, east and west,” said CEO Peter Rogoff. It includes a second downtown transit tunnel.

But it’s not cheap. If approved, the project is estimated to add $392 a year in taxes for a typical household, Sound Transit says. The proposal could make the November ballot. Initial thoughts?