It’s an interactive map that you can browse right here. (To close the splash page once it launches, click the OK button in the lower right). 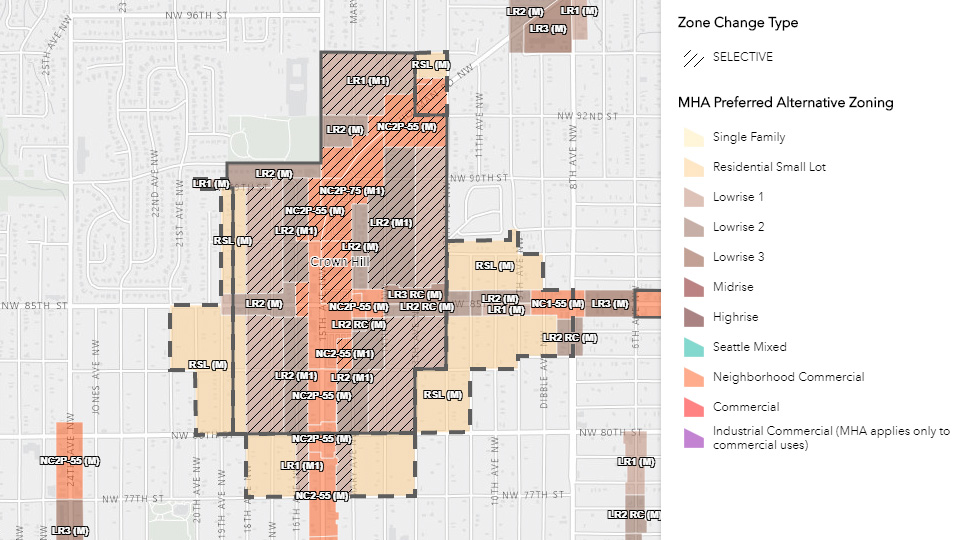 (From the new “preferred alternative” map.)

As you can see — and as the Seattle Times previewed a few days ago — Crown Hill would be one of the most impacted areas in the city.

“Crown Hill in Northwest Seattle is one of the leading laboratories for the grand-bargain experiment,” explain reporters Justin Mayor and Bob Young in the Times. “In one scenario proposed by the city, Crown Hill faces the greatest encroachment into single-family areas of any of the ‘urban villages’ where the city aims to steer growth.”

The mayor held a press conference today in Capitol Hill. “With this plan, we will extend our requirement that new developments contribute to Seattle’s affordable housing supply,” Burgess explained. “We’ve already implemented this requirement in the University District, downtown, and elsewhere. Now it’s time to bring this requirement to other high-opportunity neighborhoods so that we can hasten our progress in building a more inclusive and equitable city.”

In the “high-opportunity” neighborhood just to the north of Ballard, the Crown Hill Committee for Smart Growth has argued for less upzoning, more support for small businesses, better infrastructure and a neighborhood plan. As we reported last week, one of the area’s oldest businesses, Crown Hill Hardware, is closing at the end of the month.

While the plan is one step closer to reality, the full council vote isn’t scheduled until summer of next year. In the meantime, there are several community meetings scheduled to receive more community feedback. We’ll keep you updated.

Why is this a city council decision and not that of property owners? Is the next step eminent domain where the city will decide what is best for their experiment and against the wishes of a homeowner and force sales. We moved into this neighborhood five years ago and it has gone from cute, affordable, with a pleasant rural feel to unaffordable, poorly designed eyesore. STOP THIS CRAZY CANCER!

Carla, the population is increasing, density is rising, we need more housing for all those human beings. Change is the only constant in the universe.

Any rural feel you had for this CITY was your emotion, and not the reality around you.

Crown hill has no sidewalks, flooding problems, and cars speed through the neighborhood. The city needs to fix these issues.

What Angie 3 said. As for Angie B’s comments: development will likely improve both the sidewalk and speeding issues. As for flooding, it’s a hill—I’m thinking the problem is very localized.

The temp mayor and his crack council are clueless when it comes to zoning. Lisa Herbold literally responded my concern about the city approving an Alaska Junction multi-rise complex with less than 50% parking by saying: (a) the council has no authority over zoning; and (b) a 2012 study done by some city staffer said there is no congestion/parking problem. Seriously the reply I rec’d. This city is so clueless when it comes to electing people who can lead. Rezone to allow more development, take the builder’s campaign contributions, don’t do anything to limit sprawl, don’t do anything to address safety issues re inadequate parking or inadequate roadways, but then suggest implementing a toll in overcrowded neighborhoods like SLU. Lisa is a joke. The mayor is a joke. Vote them out!

The city has bigitis, rezoning neighborhoods for monetary and special interest groups while diminishing the quality of life for the current residents. Affordable housing is just a green light buzzword for developers while contributing nothing to solving the problem. Didn’t anyone read the article in the Seattle Times about rezoning single family neighborhoods to bring more diversity? VOTE THEM ALL OUT ALONG WITH THEIR URBAN DENSITY CESSPOOL OF A PLAN.

This is urban planning with an hammer instead of a scalpel. It will result in a lot of ugly townhomes and do nothing to improve affordability. These upzones should be put to a vote and there should be a CAP on the population and density. You have to manage both supply and demand.

“Why is this a city council decision and not that of property owners?”

Yes, only property owners have rights!

“cars speed through the neighborhood”

Yes, and usually the children of the Crown Hillbillies on this forum who claim only property owners should have rights..

Seattle is, has been for 2 decades, and will be for many more decades in the future, a BIG CITY! The unavoidable reality of a big city is higher costs…..along with higher costs comes higher income levels and jobs.

Can’t have your cake and eat it too! You pick: low cost housing or great jobs/income……….rural country life or access to a great vibrant CITY?

If you don’t want your house to become townhomes or condos, don’t sell it to a developer! No one is making you sell your home.

If you don’t want to live next to townhomes or condos, don’t live in a large, rapidly growing city.

With the comment section now open, it’s good to see the handwringers, with zero grasp on reality, are still spewing their nonsense!

If developers did not exist or were prevented from participating in the free flow of capital/supply demand economics, the result would be the construction of only SFRs with which does not add to supply and is certainly not affordable.

We elect public officials to make all sorts of difficult/complicated/often conflicted decisions.

Make your voice heard and choose your candidate based on the issues. How many of you that are uncomfortable with growth did not vote on Tuesday? If we cannot even get voter turnout to 40% how would it work to have everyone involved in urban planning. I think not.

Do you think any of the homeowners complain about the values of their homes going up?

Ballard’s yokels want to eat their cake, and keep it too.

Those on fixed incomes do not like property values increase because property taxes go up as well.

Hopefully we’ll get a decent stand alone Starbucks out of it, not the mess of a one in Safeway. And the strip club and blood bank will get pushed out.

4800 + people are moving into Seattle every month….that’s around 50,000 people per year. Where and what are they going to move into? Turn of the century New York City had the same issue where boats were bringing in thousands of people. Certain parts of the city had to turn much of their single family homes into town houses and apartments to accommodate that. This was not something that the neighborhoods decided this is something that the city decided. One of the things that may happen is The Urban Villages all across Seattle, when implemented, may bring down escalating property values as more lots and more housing are put into the market to meet the growing demand. My feeling is that the city should speed up the process with the Urban Villages so that these escalating housing costs will plateau a bit…and more of my friends in the $350-$475k range can afford to purchase a home….that is more than a 2 bedroom 1 bath fixer. One of the issues we are having, living in an area that is destined to be up-zoned is that we are in a state of limbo not knowing….if our house is going to be bull… Read more »

“if our house is going to be bull dozed even the thought of painting the trim or fixing the fence etc does not make any sense.”

Despite want some local communists want, we still own our homes and have private property rights, the thing that makes this country great. So they can’t be bulldozed without our selling them first.

So yes, you can paint your trim.

One interesting side effect is the new “Residential Small Lot” (RSL) designation, which much of the expanded area around Crown hill appears to be getting.

This will drive the values of existing homes in the changed zoning areas through the roof. The newly minted RSL zone means that you can subdivide a lot as small as 2,000 sq.ft. in size, and can build a home the maximum size of 2,200 sq.ft. (so, a two story 1,100 sq.ft. house). This will result in more moderately affordable, “smallish” homes being built in the city, but it will necessitate the demolition and subdivision of existing homes to do so.

For someone like me, with a larger 14,000 sq.ft. lot with a single house – if I were designated RSL, I could subdivide by one lot seven-times, put in seven, 2,200 sq.ft. homes and walk away a multi-millionaire many times over. With that sort of incentive, everyone owning homes Crown Hill’s RSL zone effectively just became millionaires.

Uglier, more congestion, strictly so that builders can make money. Higher taxes, no greenspace, already hideous traffic. Give Crown Hill a break. We need our small businesses and local restaurants.

Nancy, besides some horrible yakitori places, what local Crown Hill restaurants are you talking about?

Trust me, Crown Hill today is not a diner’s delight.

If upzoning means better restaurants, that upzone me!

“strictly so that builders can make money.”

That’s the only reason? Where are all the people moving to Seattle supposed to live?

Did the people who built your home, on Native American land, do it for charity or profit?

Get off my lawn!

Bring back the gold standard!

I agree that the afro-amer and/or other low income populations should be able to live in affordable dwellings. But my concerns are: Increased congestion of the sited areas; decreased parking ability for the dwellings as well as the businesses around the area. Already it has become more dangerouse trying to cross streets regardless of lights when drivers do not pay attention to activity around them. The loss of the local businesses to placement of apts. and such–>having to drive who knows where to do shopping. Currently the area provides grocery, cafes, good food, things needed to local living. Just because apts and such are provided because of bus lines, most people have jobs at a distance to their living area because that is what is available. Streets that used to be pleasant to walk down have since changed since apts, etc, fred meyers complex, are so tight with parking that one lane is barely possible. Could make the street one side parking/one side no parking; but then still where does one park their car. On 6th nw and 85th, parking is on both sides of street of 6th nw, cars coming from 85th nw whip around the corner, not looking… Read more »