Updated: The task force charged with drawing new high school boundaries in North Seattle has narrowed the maps down to two options, according to a report from KING 5 on Friday night. Then the school district followed up on Saturday evening by publishing the two new maps, and it said additional modifications may be made before the final selection. 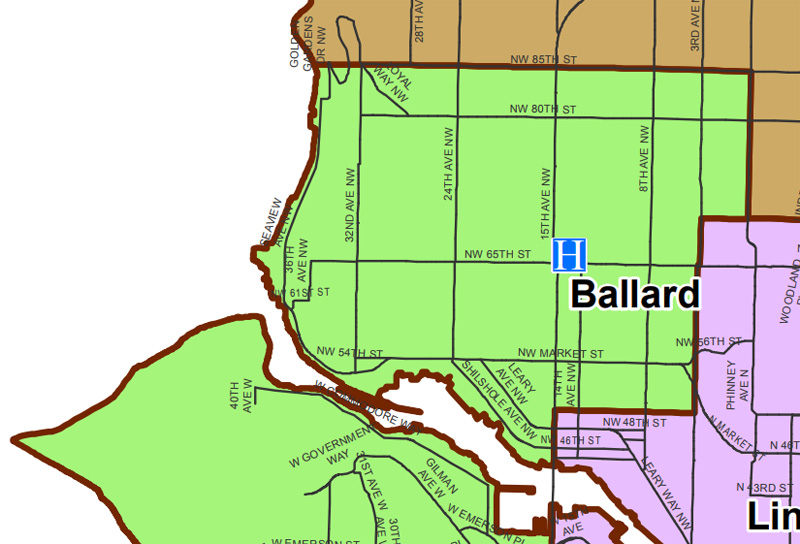 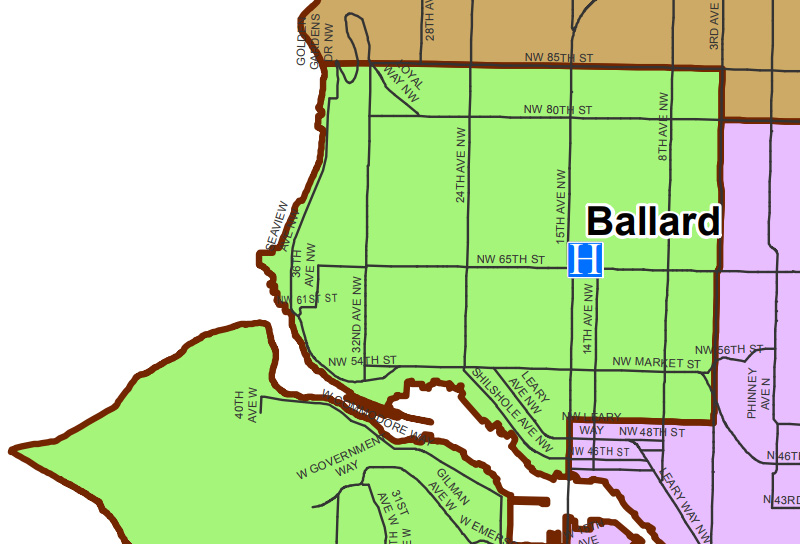 Both options draw the northern line at 85th St., not 80th St., including all of Loyal Heights, Whittier Heights and Sunset Hill (minus the Golden Gardens area north of 85th) inside the Ballard High School boundary.

The eastern line is set at 3rd Ave. The only difference between the two options in our area affects a chunk of Greenwood between 3rd and Greenwood Ave.

Both options also retain Magnolia inside the BHS boundary.

What’s next? On January 10th, the school board is holding a work session with the task force and will determine which of the two scenarios to introduce before the board on January 17th. Then on January 31st, the board expects to make the final vote. Compared to earlier timelines, this extends the process by a couple weeks.

I spoke at the last school board meeting and invited parents of students living between NW 80th and 85th to consider working with us in Magnolia to jointly endorse map scenarios that work for both communities.

We’re in contact with several of these parents and have begun a collaborative and coordinated effort, including attending yesterday’s task force meeting.

I’m upset that one of the “new” scenarios Fv6 still excludes a very small (aqua) block of Greenwood from Ballard High. Why are theses students being excluded?

While Greenwood is not the most diverse example in the larger school district, it is the most diverse school in the current Ballard High assignment area both in terms of racial diversity and economic diversity. The less affluent and more diverse neighborhood of Greenwood is expected to move out. It gives the impression the district is hoping to slip this northern border change past the Greenwood families that may not have the resources to stay informed on proposed changes and speak up.

This corner of Greenwood needs to remain at Ballard High School to provide much needed diversity (Ballard is 75% white) and maintain our neighborhood community. Choosing any boundary scenario that moves Greenwood students out of Ballard High School would be a step in the wrong direction from the district’s commitment to racial equity at all schools.

We are currently Ballard high and should stay.

You are exactly right that the change is being slipped by you. You have to pay attention to the SPS site. These maps that were discussed last night were posted to the site on 12/27. However, unlike previous changes, these were not sent out via email that I’m aware of. So, pay attention and speak up if this impacts you.

Leaving out all of the Golden Garden, North Beach and Blue Ridge kids? Too bad, Magnolia needs it’s own school in Fort Lawton development or The new Magnolia Elementary School & Ballard needs to be returned to Ballard ! Why are actual Ballard kids having to take 2 buses transferring on 99 for 45 minutes to Ingraham on the NE side of the City ? I’m sure Magnolia wouldn’t welcome Ballard kids in their schools if the shoe was on the other foot.
SPS is out of touch with maybe Ballard parents need to sue Magnolia parents for taking up spots in our neighborhood school ?

“Your” neighborhood school?? What nonsense.

What about Phinney Ridge? Kids can, and do, walk to BHS from the Ridge area. They’d have to take a bus elsewhere.

You yourself pointed out that the area you are concerned about is ” Golden Garden, North Beach and Blue Ridge.”

Then you go on to ask- “Why are actual Ballard kids having to take 2 buses ” based on these Non-Ballard communities. Being adjacent to Ballard does not put you in Ballard. I am baffled that you think it does…

Just pointing out the facts.

You asked in this thread about getting involved to maintain the NW 85th St. boundary.

We are currently working with several parents from your area. If you’d like to work with us, too, to jointly endorse scenarios that work for you and your neighbors and Magnolia, please let us know.

too bad the city sold Queen Anne High to developers – what a weird move that was.

the city has been pusher for more and more density (more property tax…) and has been allowing many crucial yet basic infrastructure needs go unaddressed.

Good to see the folks from the mythical land of “North Ballard” are back. Until they sell their homes that is, then suddenly they’ll be living in “North Beach” and “Blue Ridge”.

Please send your comments to the Growth Boundaries Committee who will be announcing the new boundaries (supposedly) on Jan. 17th. They can be reached at growthboundaries@seattleschools.org

Also, School Board of Directors, District IV is represented by Eden Mack and her email is eden.mack@seattleschools.org