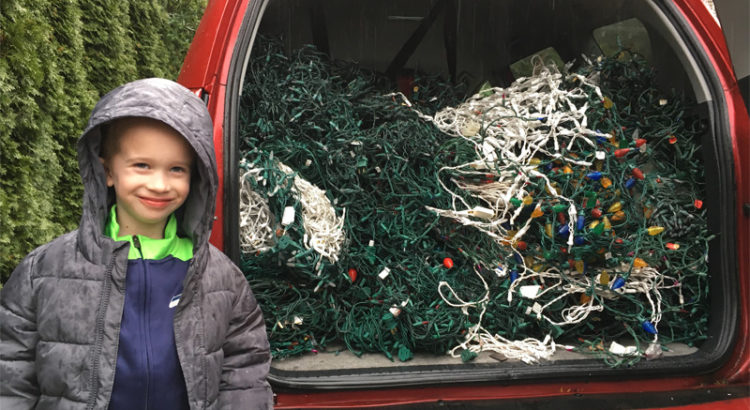 It all began last summer when 6-year-old Owen and his dad Ryan wanted to dispose of old batteries without sending them to a landfill.

Owen was curious how recycling worked, and it took three phone calls before Ryan found a spot to drop off the batteries. And that led to an idea: what if they created a free service to pick up and recycle or reuse items that their neighbors typically throw in the trash?

They started picking up batteries from their neighbors in Queen Anne. As they found more items in their own home to recycle, they expanded to styrofoam, plastic bags, clothes hangers, light bulbs — even extra Halloween candy (which they donated to Birthday Dreams, a group that plans birthday parties for homeless kids.)

They started to grow outside their neighborhood, and they created an email list to coordinate the expanding pickups. Suddenly Owen’s List was born. It’s been particularly busy after the holidays. For example, Ryan and Owen just picked up more than 700 pounds of styrofoam (above) and 224 pounds of dead holiday lights.

“I had no idea until just recently that old Christmas lights had a use,” Ryan said. “It was fun to teach him about the different materials that recyclers can collect from them.”

How does it work? Once you’re signed up to Owen’s List, you’ll receive a periodic email offering to pick up a specific type of item (“prepare to be surprised,” Ryan says.) Once you respond, they coordinate pickup locations based on factors like their available time, the size of the items and the population density of a given area.

“People leave these items out on their porch and we come by and get it and take their stuff along with ours,” he said.

Some of these pickups have started to expand to Ballard. “We live close to Ballard so it’s relatively easy,” Ryan told us.

After they pick up the items, Ryan and Owen follow up with an email explaining where they dropped them off, helping educate neighbors how they can do this on their own.

“Hard to say where this goes in a year,” Ryan said when we asked him about the future of Owen’s List. “One goal I have is for people to start giving us ideas that we can research and then share with the community. We’ve seen a little of that so far and expect more as the size of the list grows.”

(Thank you Kady for the tip!)