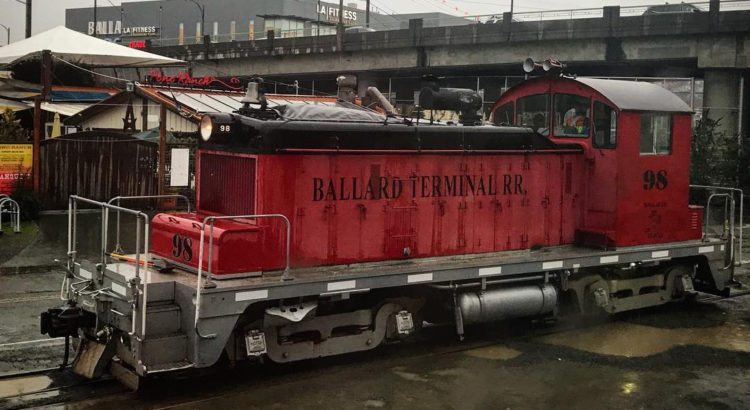 For many in Ballard, the early-morning train whistles are just part of the sonic fabric of the neighborhood, echoing through the fog. For a few others, they’re a bit of a surprise — there’s a railroad in Ballard? — and sometimes they can wake you up.

Several members of the My Ballard Facebook Group said the whistles from the Ballard Terminal Railroad seemed a little louder than usual a couple mornings ago. In our experience over the years, it’s usually a function of the colder weather and inversion layers, which tend to focus sound waves more horizontally, amplifying their distance.

Newer Ballard residents are often surprised to learn about the Ballard Terminal Railroad Company, a working one-engine railroad that transports materials from the tracks near Shilshole Bay Marina — where it connects with the BNSF mainline — to Salmon Bay Sand and Gravel on Shilshole Ave. The company has operated out of that location for the last 110 years, stretching back to the era when trains filled Ballard tracks.

Now there’s just one locomotive, numbered 98 and named “Li’l Beaver” after the Ballard High Beavers. Sometimes people think the engine is a static museum piece; since Ballard Terminal Railroad tends to operate before first light, the Li’L Beaver is rarely seen at work.

If you’re as fascinated as we are with the railroad, you can learn more about the Ballard Terminal Railroad Company here and here. (Thank you to @artemis618 for permission to use the photo.)

28 thoughts to “Whistles from the Ballard Terminal Railroad”