Salt and Straw giving away free ice cream, to open in Ballard soon – My Ballard Skip to main content 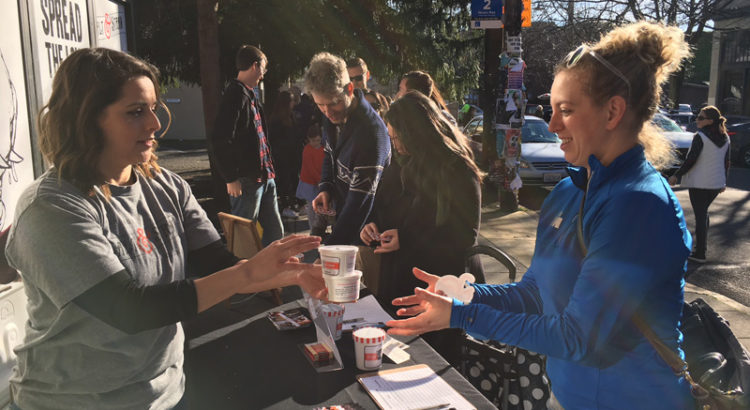 Update: LOTS of people came for the free ice cream on Sunday afternoon.

The line stretched over a block, merging with the crowd from the Ballard Farmers Market. Earlier:The Portland artisan ice cream company, Salt and Straw, is planning to open its first Seattle stores next month: one in Capitol Hill and another here in Ballard.

To drum up some excitement, they’re going to be giving away free ice cream cups this Sunday in front of their upcoming store at 5420 Ballard Ave. NW (across from La Carta de Oaxaca). The craziness will begin at noon and end when they run out of ice cream. (Yes, the Ballard Farmers Market will be in full swing nearby. Be prepared.)

Salt and Straw is the brainchild of Kim Malek and her cousin Tyler Malek (pictured above). It began in Portland with a bang, and they’ve expanded to LA, SF and San Diego. In summer of last year, they landed an investment from a noted New York restaurant group to help fuel their expansion.

“We’re about building strong local community – both in the neighborhoods where we do business and by purchasing as many local products as possible,” explains founder Kim Malek.

Thank you for having a vegan option!