With Ballard fires still unsolved, Magnolia has its own string of arson cases – My Ballard Skip to main content 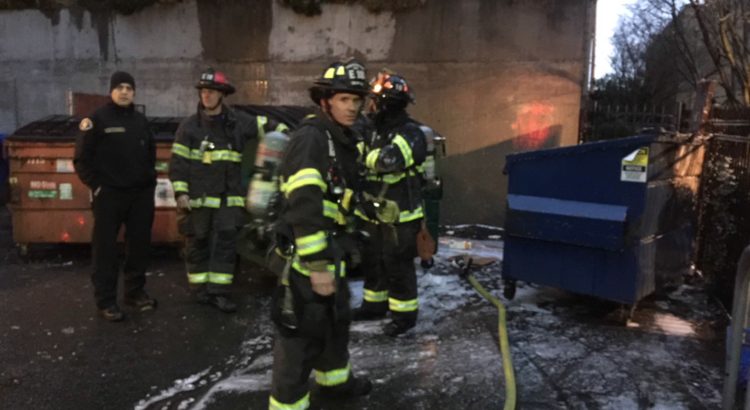 After a string of 21 dumpster fires in the Ballard area — including one on Phinney Ridge and another in Magnolia — the arsons have mysteriously stopped. The last fires were set on the weekend of January 6th, and Seattle Fire tells us there are no new cases since then. Investigators are mum on any details.

Then on Sunday night in Magnolia, a blaze in a vacant auditorium on Fort Lawton attracted a huge fire response, including many firefighters from Ballard. Seattle Fire has concluded that it was intentionally set.

“This was the first arson fire in Magnolia that we have had in a while” other than the dumpster fire earlier this month, Seattle Fire spokeswoman Kristin Tinsley told My Ballard. She’s referring to a string of unsolved fires in Magnolia last year — 13 in all. The fire on Sunday night makes 14.

“They have mostly been to outside shrubbery/hedges, recycle bins, etc.,” Tinsley explained in an email. Two of the fires spread to nearby structures.

Here’s a map of the Magnolia fires:

That makes a string of 14 fires in Magnolia and another 21 in Ballard, 35 unsolved fires in all — with lots of similarities. Are they the act of a single arsonist? That’s unclear, and Seattle Fire refers all investigative questions to Seattle Police’s Arson and Bomb Squad, which has yet to report on any new developments. We’ll keep you updated…

Keep those magnolia savages out of our schools!

You know what’s fun? Visiting any other city of similar size and not being hassled by junkies or having to worry constantly about theft, robbery , or now, arson. I know people in the 206 LUV to trash on the red states – and hey it is warranted sometimes – but for some reason many here are A-OK with allowing this gorgeous city to transform into an giant trailer park. All the snide “Make Ballard Great Again” comments are just feeble attempts to deflect and distract from your own culpability in electing and supporting the absolute DUMBEST community-college-teacher type officials and their idiotic taxes and policies.
It’s basically a real time lesson is HOW NOT to run a city.

Geeky Swedes please delete the post above of this soy boy who keeps impersonating me.

You know you’re over the target when you’re start taking flack, or drawing flies in the form of passive aggressive comment thread harassment.

Gee, I’m NOT a private eye and don’t play 1 on TV, but this may be as simple as checking the arrest records. Merely going back to the date the fires stopped and looking at all arrests made that day or around. DUH. Unless we are truly dealing with total idiots, this HAS been taken into consideration. This wasn’t a family man or business person. It was 1 of the chosen folks roaming our streets, who was taken off said streets, in 1 way or another. I imagine though, to many, this was “just the cost of doing business” here in Seattle. Besides, it wasn’t MY stuff being burned dude!

I believe the police have a pretty good idea of the kid who is doing this. He has a history. But, it’s just impossible to prove it unless they have him on video committing the crime.