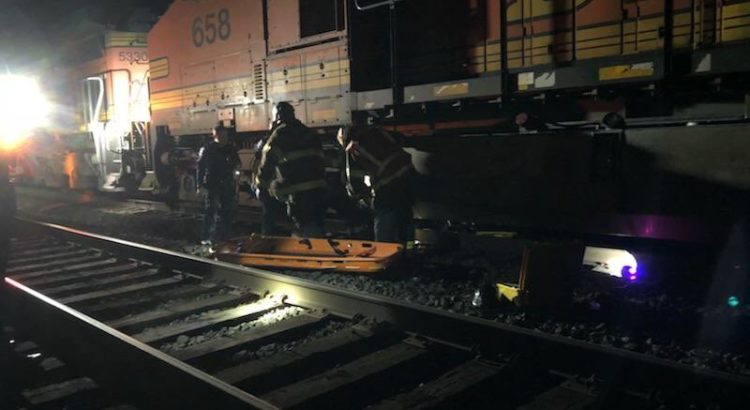 Update 11:30 p.m. Seattle Fire says an approximately 50-year-old man was hit by a train, and he was taken to the hospital in stable condition with serious injuries.

Earlier: Firefighters responded to Carkeek Park just after 9:30 p.m. for a “heavy rescue,” and scanner reports say a pedestrian was hit by a train.

The train stopped, and medics responded to attend to the patient, who may have survived the collision. Train traffic through the park — which is a major line between Seattle and Everett — was shut down for about an hour.

Silver posted updates from the fire scanner in the My Ballard Group.

(Photo by the Seattle Fire Department)

The scanner mentioned one amputated foot, another foot probably unsalvageable, ETOH abuse, and shutting down the train track. Sounds like a drunk guy got hit by a train.

ETOH = Alcohol. Drunk. Maybe passed out on the tracks?

Regarless of what the 50 yr old man was on his life will never be the same. May God care for his recovery.

Another successful graduate of the Mike O’Brien Railroad Safety Course.

Don’t be mean. He was helping to look for a missing woman – in the dark. Could be he tripped and fell.

@ Lynsey – Not sure where you heard he was looking for someone, but I can tell you his intention was suicide.

I befriended a homeless man, about in his fifties who has been living in the woods off the train tracks about 2 years ago. As a veteran he was living with many pstd issues and alcohol abuse. I can only hope that it was not him. I tried contacting hospital, fire and police with no luck. I would love to know that it was not him..any ideas how to find out?

This man is not a veteran, Bob.