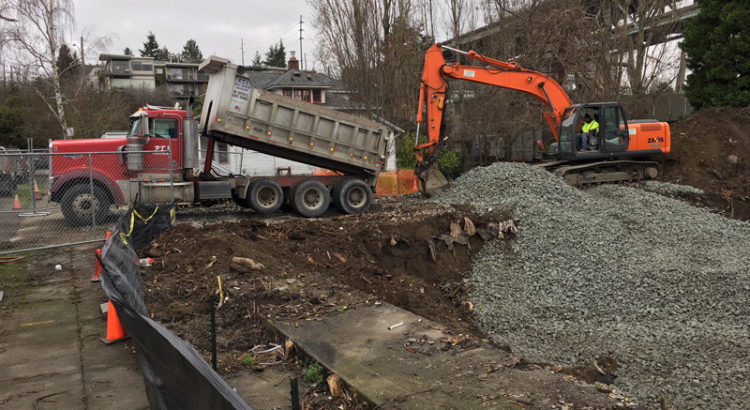 The Ballard Nickelsville camp was slated to move at the end of its two-year lease in November, but it had nowhere to go. The city granted an extension while it worked on the camp’s future location: 3814 4th Ave. NE in the Northlake neighborhood.

The city initially expected the site to be ready by mid-December, but work has taken longer than anticipated. When we visited this week, trucks were hauling in rock to fill the hole left by a demolished building. The land is owned by Seattle City Light.

“The property will be turned over to LIHI sometime mid-month,” explains city spokesman Will Lemke, referring to the Low Income Housing Institute, which operates the Nickelsville homeless camps. “They’ll organize work parties to construct the tiny homes.”

If they work quickly, the camp could move around the end of the month, but Lemke says there’s “no hard date for occupancy.” We’ll keep you updated.

Use the space under Ballard Bridge for storing sdot’s city equipment?

Guest
I Sawant Some Answers

Isn’t moving all these Nickelsville camps around nothing more than a slow motion sweep? Why can’t they stay if the neighbors around them say that the residents don;t cause problems? It’s cognitive dissonace to a degree to hear Sawant yelling about sweeps and yet this program so near to her heart makes people uproot their lives just as much.

How much did that cost?

Guest
No Metrics for Success

I’m confused here. If the city has millions of $ at their disposal for homeless services, why aren’t the residents of these semi-permanent camps offered job training/placement to transition into real housing? I’m aware that many suffer from certain disabilities that may prohibit work, but in those cases the city certainly could place them in subsidized housing.

Obviously the junkies are a very real problem, and there is NO excuse for the city’s abandonment of any kind of law enforcement in many cases (looking at you, O’Brien) but how hard is it to get a crew together and get those able to work employed and housed?

The success rate for all the hundreds of millions of dollars seems very low. At this point in this largely self induced “crisis” the city needs to get job/housing placement into gear and separate the needy/unfortunate from the lifer drifter moochers.

Lowest common denominators. Why is being used (you tools) such a great thing? These campers are being used along with the tax payers, who refuse to wake up and begin the ending. Why not deputize a few of the willing? They then can work WITH the city and infiltrate, helping from within. People will take notice and perhaps want that too. But for now, enjoy that 17% tax increase we all just got. As a contractor, I’m officially raising my rates. Gotta keep up with these Nuevo riche millennials ya know.

Wrong, the camp had someplace to go, the city just didn’t have their shit together, as usual, so they broke their agreement and will be moving along months after they were supposed to. Enjoy, Wallingford.

“If the city has millions of $ at their disposal for homeless services, why aren’t the residents of these semi-permanent camps offered job training/placement to transition into real housing?”

Because propagating and continuing the homeless crisis keeps the coffers full for the Homeless Industrial Complex. There is no motivation in getting people off the streets. It’s shameful that LIHI and SHARE/WHEEL profit from others’ misery.

Look up “Anatomy of a Swindle” online and your blood will start boiling.

Why move these people at all (in existing camp)?
They have not raped, pillaged or plundered.
They have not ‘ruined business’ nor discouraged visitors to the Locks.
By all the complaints (as well as my own observation) the need seems still unmet here on Ballard streets.
The ‘new location’ should house additional campers not the ones already established here.
This is nothing more than a more expensive slow motion sweep. I don’t think the ‘Ballard Loves You’ should be interpreted as Ballard Loves You – Now Move Along.