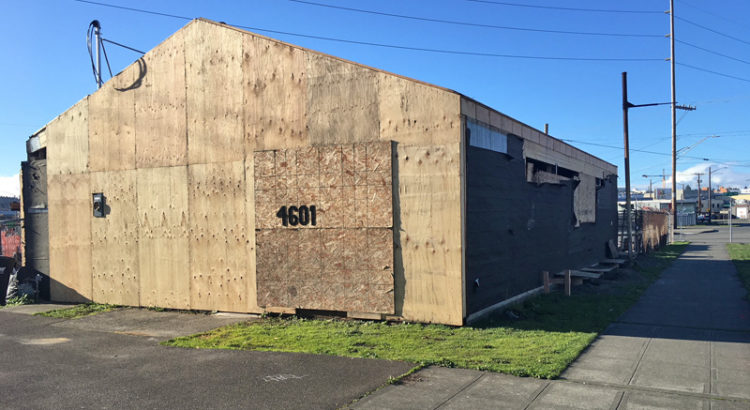 Conveniently located across the street from Giddy Up Burgers on NW Leary Way, Dockside Cannabis is hard at work on its third location in the Seattle area.

The building at 4601 NW Leary Way is getting an extensive makeover, but co-owner Maria Moses tells My Ballard they’re hoping to open as soon as April. Dockside Cannabis already has stores in Sodo and Shoreline (pictured below).

“Dockside started out as Dockside Co-op, a medical marijuana dispensary, in March 2011,” explains Moses. “Our first location was just down the street on 36th & Greenwood in Fremont. Also, two of the three owners (me included) have been Frelard area residents for over 18 years. So we’re really excited to be back in the neighborhood.” On its website, Dockside says it’s active in its communities, sending out a “green team” to pick up trash and a “street team” to work to “promote health relationships between our business and neighbors.” It also offers free Cannabis 101 classes, and it hosts talks at local senior centers.

If you’re interested, Dockside has just posted job openings for the new store.

With New Seasons and Dockside at 46th and Leary, maybe the city will get around to putting a traffic light there. I live on 46th and 3rd, and I have to walk down to either 44th to cross *or* walk around to NW 11th to catch a light. Ridiculous.

@ SER, ya, that’s a pretty bad little intersection there, hopefully thee city looks at improving it.

Always nice to see new businesses in the area, I wish them luck, that location’s challenging for sure.

Perhaps I’m ignorant of how the weed taxes work, but with how many shops there are and how generally busy they are, it’s amazing the city even thinks about fleecing us with endless levies and property tax hikes.

“guesty” i am a cancer survivor–why should *we* out-of-pocket for lifesaving meds, pay your levies and taxes? get r e a l. living here is a privilege–not a right. move if you don’t like taxes/levies that keep you safe.

Guest
Advocate for the Devil

“FILLE” So you have no issues paying taxes on a product that we currently pay taxes to keep people incarcerated for possesing and growing? There are literally people still in jail for this! That we pay to keep there! And there are still people with marijuana charges that can’t get them exsponged meanwhile we’re all reveling in our recreational privileges.