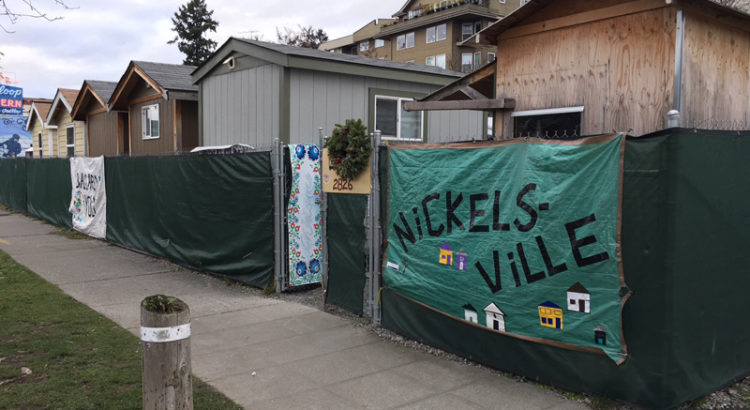 The city of Seattle announced this afternoon that Nickelsville’s move to the Northlake location will start getting underway this weekend.

As we’ve been reporting, Low Income Housing Institute volunteers have been hard at work installing 22 tiny houses at 3814 Fourth Ave. NE in the Northlake neighborhood.

The new location (below) is 20 percent larger than the Ballard location on Market St., and it will also have electricity, sewer services and running water. The city said the Market St. site will be phased out and de-camped during the month of March, before being handed back over to Seattle City Light, which owns the property.

Residents in the Ballard camp were slated to move at the end of their two-year lease in November, but the Northlake site — also a City Light property — was not ready.

Finally! Take Mike O’Brien with you.

Finally the dumpster fires will come to an end.

I was grateful for the diversity they brought to our neighborhood. Wishing them well at their new location.

I’m glad the homeless are getting nicer facilities. It was a pleasure housing them in Ballard.

Yeah lets keep moving the homeless around the city at a significant cost and plenty of city and contractor resources. The city keeps telling us this is a “temporary” solution. Three years later and we are moving them to another camp for 2-3 years. Maybe ten years from now and $1+ billion later we will start questioning the cities commitment to actually providing a solution. I will bet if the city disclosed the costs for all of this (which they will never provide because their is no transparency in the hundreds of millions being spent on the homeless crisis) we would find out that all of this is 2-3 times more expensive than had we just housed these people in market rate apartments. Which would have had the additional benefit of giving them some stability in their lives. But instead the do-gooders can feel great for keeping the homeless crisis going by donating some old food from their kitchen shelves or volunteering a couple hours on a weekend to build small houses and improve their resumes or college applications, while at the same time ensuring their will always be lots of homeless dependent on the good will of future generations… Read more »

When reading these stories I always look for the “success” parts, as in how many sobered up and or found jobs? Or is that not a major requirement? Because after all, in life, most if not all “limitations” are self-imposed. All I see here is a political football being kicked around. Perhaps I will never understand exactly why people love being used as tools to continue this mess along with emptying their wallets, all in the name of compassion, a well worn out word that’s lost it’s true meaning. “Is it a hammock or a safety net”? ” “A hand up, or a hand-out”?

@Scott: Currently, a small amount of very vocal people are adamantly against any facilitates that would allow homeless to clean up and seek job training. You seem really concerned about it, so you could take your skills and knowledge and volunteer a job training booth at the next Nickelsville.

Or you could continue posting delusional comments on a neighborhood blog. That seems to be making a difference!

@Truth
This city just just hire these camper folks to run all the major depts.
They would probably do a better job than the CC.

But seriously:
What you don’t seem to understand regarding Scott’s point is that any endeavor, especially one as – cough – well-funded as the homeless crisis must have clear goals and metrics for success. I’ve worked with immigrants from many places and almost all of them had one thing in common: a lack of adolescent self pity and an understanding that even the poor in our country have access to free education. If one avoids narcotics and awful decisions, then opportunities are available. You seem to think that babysitting adults is a good idea.

Pretty sure if this was the Depression, the hard-luck-folks would be lined up to apply at every “help wanted” sign and craigslist ad instead of giving sad sack interviews to the Times and selling real change. I agree with Ballardite in that the ones incapable of working should be housed, but the rest who are simply making a lifestyle out of political theatrics and handouts need to get put to work.

“If one avoids narcotics and awful decisions, then opportunities are available.” Great! And when someone makes the wrong decision in their life and becomes a homeless addict, should we just brush them aside because the screwed up? Does that make for a good society to not give a second chance? Certainly not a first world society, but then again, the US over the past decade has clearly demonstrated that we have no desire to stay a first world society. “Pretty sure if this was the Depression, the hard-luck-folks would be lined up to apply at every “help wanted” sign and craigslist ad instead of giving sad sack interviews to the Times and selling real change.” The Great Depression was millions of able bodied people literally starving to death and desperate for work with unemployment above 20%. Also note that it took heavy government intervention and an 80% tax on the rich to pull us out of that. They created jobs that required basically a pulse to apply for. Good luck suggesting something like that in today’s society. That’s completely different than the situation we are in right now. The unemployment rate is around 4.5% and the jobs that are available… Read more »

@Truth
I a person shoots off their toes with a firearm, liberals laugh and say “hahaha idiot!’ but if someone *DECIDES* to use hard drugs then out come the excuses and handkerchiefs.

Read my post more closely: these people should be given jobs if able to work. If unwilling to work, then they need to GTFO. I’m aware of the New Deal etc but there is no point in wasting money on people who cannot, and will not, help themselves. The city makes no distinction between junkie drifters and genuine hard-luck folks and just blows all the money for the sake of photo ops and re-election campaign PR bleeding heart nonsense.

I’m all for offering a second chance. But when we reach out as a society, over and over again, with offers of shelter and assistance only to be turned down again and again, then it’s time for more stick than carrot. The person has to go into treatment or move along.

Maybe we could establish a worker H1B program with China. The unemployed drifters under I-5 and the Ballard bridge could be given H1B jobs at the apple / Foxcom factories in China through a guest worker program. China has been making great strides at putting people to work, and the employment opportunities there are endless.

@Sockpuppet: You pretend that you’re for a second chance, but two of your three posts are very clear that you don’t. Good try at an attempt to seem tough, don’t forget to take your pills, they’ll really help!

@Truth
Hey i enjoy the stolen bike market in front of the QFC on 24th. I’m sure these loser junkies just need a hug. Head on down to 22nd or Commons Park and give them some love, Amigo!

Wonder how they chose the new location? The site might be larger, but it’s not next to a store or tavern. No bus service on Northlake. Will it lead to a sober life and a job?

@TRUTH Wrong. Its most of you Ballard types. I’m a formerly homeless person who once had the pleasure of being called a troublemaker on this board and I can assure you that Ballard is ground zero for bigotry in Seattle. If you want to help the homeless start teaching a seminar about the tactics of modern day folk hero Richard Kreimer. What better way for the homeless to improve their own lives then by suing the pants off of some unrepentant Ballard bigot, putting them out of business and then using the money to restart their life from scratch. In other words, helping the morale of the homeless by giving them the tools to fight back is what will make the difference. As I said on this board once before: on top of everything else about the homeless experience that makes one’s life a living hell, dealing with non-homeless people and their irrational paranoia and hatred is what makes it especially intolerable.

Why would you let people sleep in your backyard but not invite them in to sleep on your couch? Is that compassion?