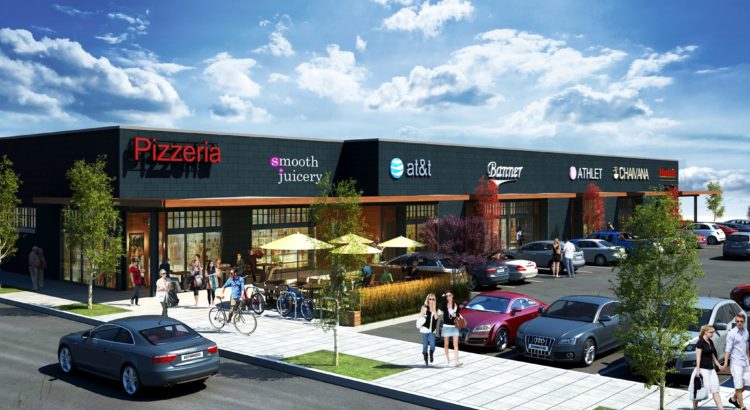 If you’ve wondered what’s planned for the new retail-restaurant space under construction across from New Seasons, you’re not alone. After we asked for tips earlier this week, My Ballard reader Stephen pointed us to The Terminal At Ballard at 907 NW Ballard Way.

“The Terminal” is the name of the CenterCal Properties development that includes New Seasons — which is opening on May 9th — and “14,000-square feet of restaurant and small shop retail space” on the other side of the parking lot: Since its humble beginnings in Santa Barbara in 1969, Habit Burger has grown into a national chain of over 200 restaurants. Its closest locations are in Shoreline and Tukwila. Here’s the menu.

We reached out to both CenterCal Properties and Habit Burger, but neither has responded so far.

The Terminal’s open date is scheduled for sometime next month.

(Thanks Stephen for the tip!)

That is one fine looking strip mall. Sidewalks and trees will be great spots for tarps and tents.

LOL, I have to laugh at California Uber Alles because…he’s not wrong.

I guess there’s enough Midwest transplants these days that are willing to pay top dollar for disappointingly mediocre hamburgers. Look at 5 Guys on Market!

The Habit is my all-time favorite burger joint! give it a try :)

Or you could support an awesome local business like Giddyup Burgers right across the street.

They need to go back to their old fries the ones they opened with. Then I’ll go back.

OMG, enough with the burgers! How about one good Chinese? Ethiopian?

I like the retro idea of strip mall retail surrounded by parking lots. It’s like Amazon never happened and everyone has a parking spot at their Apodment to park a personal car, which they can then use to sit in traffic for 45 min to drive a couple blocks past five burger spots and four grocery stores so they can shop at a grocery store and buy a hamburger. They will then enjoy eating their hamburger in a parking spot magically converted to a “park” through the addition of tables and chairs.

I guess they got one thing right in their bizarre fantasy world in that if people actually did drive past grocery stores and hamburger joints to buy groceries and hamburgers they will likely be driving an Audi, which appears to be the only acceptable brand of vehicle.

To all of you nattering nabobs: vote with your feet, do NOT go to these places. See how easy it really can be! And doesn’t anybody freaking cook these days? Want Ethiopian food? Cook some. Or doers it fit your version of racism because there aren’t enough Ethiopian eateries? Do you think these folks just sit on their asses and don’t go find good Ethiopian food? Too funny. We could raise a lot of $$ here for kids, with a bitch-a-thon. Oh yes, almost forgot: Audi’s are THE problem in today’s Ballard, and not Mike O’Brien et al.

@Scott: Will you teach me your elite Ethiopian cooking skillz?

I have to admit as a 30 year Ballard resident, it does seem we should be beyond this by now.
So many impermeable surfaces, with the expectation that one will drive from New Seasons. How about more green so folks can walk and make it a walking/biking destination, with BG access, not a quick drive in and out. How about a walkway to the near by water to walk to for a viewing…
Create the world you want to live in

Agreed PJJENSON. Ballard is taking almost every chance to make itself more unlivable and less walkable. I do notice that the Ballard Market is now carrying teff flour though for your injera so that is one serious civic problem solved.

Seattle in general is ruthless about allowing individuals to illegally occupy waterfront access. When I moved here several decades ago I thought that must be what they mean by the much vaunted “Seattle tolerance”. No regulations, no coastal commission. In Sydney Australia you can walk for miles along the ocean front. And the fancy coastal houses are back behind the pedestrian promenade. Not so Seattle – beauty and livability before the self enriching needs of developers? Never!

@PJJenson
Neat huh?
The city of the future looks just like a strip in Orange County. The “pizzeria” will have to charge some stupid soda tax and the cars will get prowled in the parking lot by thieving junkies.
More cars!! Just what we need.

Good call! It DOES look like “a strip in Orange County”. All they need is a Botox clinic.

What if you don’t own an Audi?

I personally like 5 guys. I’m also originally from Virginia so in a way I’m supporting my local hometown. If everyone thinks of it that way, I bet people would eat there more often.