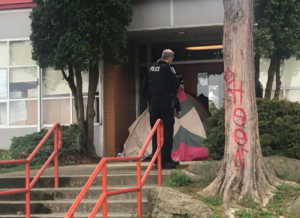 A homeless tent has been set up in one of the entrance areas to Whitman Middle School, KIRO TV and MyNorthwest reported last night.

The school has been in spring break all week, and the tent has been set up since Tuesday, KIRO reported. School resumes on Monday.

A Seattle police officer arrived while KIRO was covering the story, but the tent’s occupant had left. It’s unclear if the tent remains today.

According to the city’s recently-updated unauthorized encampments rules (.pdf), the tent qualifies for removal because it “creates an obstruction” and is located at a school. But the rules require “notice shall be posted no fewer than 72 hours before an encampment removal.”