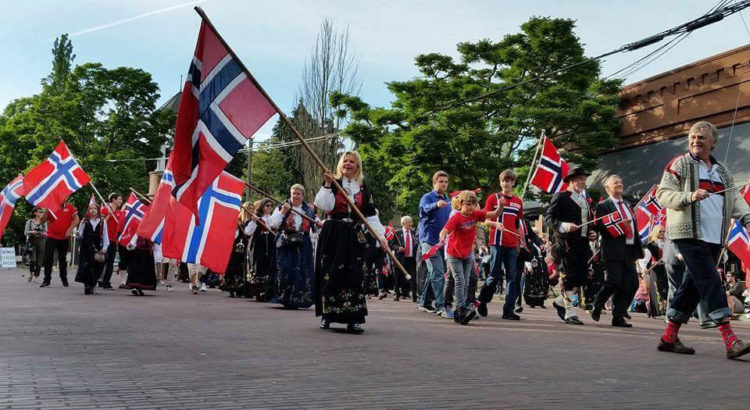 It hasn’t been the happiest of days in Ballard recently, and that’s all the more reason to attend Thursday evening’s Syttende Mai — 17th of May — celebrations and parade through Ballard. The parade is the largest of its kind outside Norway, and it draws thousands of festive people across the neighborhood and beyond.

Plus, pleasant weather is in the forecast.

Let’s start with the big event, which caps a day of activities celebrating Norway’s Constitution Day. The parade will feature marching bands, drill teams, classic cars, vikings, funky floats and Scandinavian flair. It begins at 6 p.m. at the corner of NW 62nd and 24th Ave. NW. It follows 24th down to Market, heads to Bergen Place Park and turns onto Ballard Ave.

For those neighborhood newbies out there, parking is always a struggle, especially if you’re not setting up early along the route, like many families do. So plan your approach carefully. And traffic will be a nightmare if you’re trying to navigate central Ballard — there’s no way you can cross the parade route during the event.

The celebrations get underway earlier in the day. The brand new Nordic Museum will have special events for the kids from 10 a.m. to 2 p.m. At noon the museum will host a (sold out) luncheon with the parade’s grand marshal, Kåre Aas, Norwegian Ambassador to the US.

From noon to 5 p.m., the Sons of Norway Leif Erikson Hall is having an open house with live music. The Lodge’s Nordic Cafe will be selling its famous smørbrød, lefse and krumkake.

Over at Bergen Place, the entertainment begins at 2 p.m. and runs until 5:45 p.m. Here’s the performance schedule.

After the parade, the annual Syttende Gay event will kick into gear at 7 p.m at the Cedar Room. The special guest this year is Cash Court from Olympia, who was featured on the Norwegian Reality Show, Alt for Norg. There’s a suggested donation of $7.

One more thing: The folks behind the Skål Beer Hall, which is coming to Ballard Ave., will have a tent at the corner Ballard Ave NW and 22nd Ave NW during the parade. They’ll have a preview of their menu, including signature lamb and pork sausages.

We’ll be attending the parade and will post photos here on My Ballard. Have fun!

What the ‘hasnt been the happiest days” comment all about except for bad jounalism?

A woman was raped by a transient in the restroom of Carter Volkswagen on Monday. That qualifies as *not happy” in my book.

I wonder if Elenchos will sit this one out…

Looks like the parade route goes right by the scene of the crime. I wonder if O’Brien will march by with that sunny grin of his.

Takes a lot of nerve to help wreck a neighborhood, then attempt some snide mockery of those who are upset about it, Truth. A new low!

I don’t understand why we tried to attract these jerks to our city in the first place. The city is ruined. They’ll be at the parade pretending to like Ballard but they really like how it is more and more like everywhere else and is close to south lake union.

@Syttende Elenchos: I thought that was Candyman, not Beetlejuice. Maybe it’s both.
@Bhagwan: LOL at your 5/5 Stars, needs more taxes.
@Truth: Nobody is mentally delusional, except possibly the ‘fine, upstanding, needs our help’ rapist who attacked that poor woman on Monday.

@Trump!: Where, how, and for how long? At this point, I need a drink and a good punk show.

Of course a story about the Syttende Mai parade devolves into homeless bashing. Because Mike O’Brien.

Syttende Mai – Norway’s Constitution Day – would seem to be a teachable moment to talk about Norway and homelessness.

Namely, the old Ballardites can celebrate how Norway provides generous social services w/ comprehensive social work among its people, and has a very low level of homelessless – less than 1 in 1000.

Luckily today had good weather – but good citizenship doesn’t have to depend on luck.

Was there a needle collecting float in the parade? That seems to be one of the attractions of Ballard. Better than clam digging at Golden Gardens.

@Philip Hu Dunno if you’ve noticed, but they tweakers and junkies aren’t Norwegians, and places that have nice social safety nets like the Scandi countries (though they too now have a problem with violent “guests”) are high trust societies that sprang out of a traditionally religious cultures. While they are now modernized they share common behavior and mores. The word “customs” sadly to us only means to be frisked at the airport instead of a set of acceptable norms in a given place. Many places that have ignored problems while trying to accommodate people with radically different behaviors and expectations are having the same political discussions about shared values, acceptable behavior, safety, and funding. What you’re attempting to lecture your neighbors about is, sadly, not part of the American experience. Taxing citizens to subsidize roaming hordes of criminals while lecturing them about “civility” and “teachable moments” can seem condescending and even offensive. No disrespect intended as I’m sure you didn’t mean in that way. Sincerely. We could also talk about the decline of the 2 parent family and the lack of fathers that resulted in this wave of despair, but strangely, Progressives are loath to discuss that aspect of our… Read more »

Norway is a racially, ethnically and religiously homogenous petro-state. And just like Denmark, add a just few percentage points of non-white foreigners and they swing hard right against immigration.

Turns out the Scandos love generous social services, but only with themselves.

Man, sockpuppet, you really hate America, don’t you? What country are you posting all this out of? Don’t say Russia. Obviously we’re all thinking Russia. But don’t say it. Say Uzbekistan or something, so you won’t seem like such a cliche. It’s Russia, though, right?