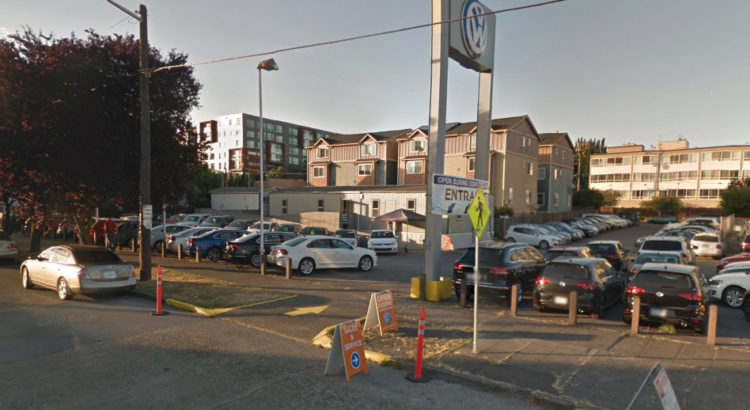 Updated: A woman was raped inside the bathroom at Carter Volkswagen on Leary Way on Monday morning, according to court documents.

The 40-year-old woman had taken her car in for service just after 7 a.m. After getting some coffee, she went to the restroom, which is in a temporary area due to ongoing construction.

After following her into the women’s bathroom, a homeless man forced open the stall door despite the woman’s best efforts to hold it closed, according to the documents.

After hearing the commotion, employees ran to the bathroom, but the door was locked. According to the probable cause documents, the suspect admitted to locking the door after he walked in.

“They got the door open and a few employees came to her aid,” said Jennifer Moran, executive manager at Carter Volkswagen. “They detained him until police arrived.” A customer also helped detain the man.

The suspect was identified by KOMO News and Q13 as Christopher Edward Teel. Court documents say he admitted to the rape and was “resisting, aggressive and non-compliant” with officers. His address listed in the police report is “99999 Homeless St. Seattle.”

Christopher Edward Teel, the 24-yo homeless man arrested for rape at Ballard VW dealership Monday has prior arrest for squatting in Magnolia home in August 2016. @KIRO7Seattle pic.twitter.com/AqJXCi40Df

Teel is shown on King County Jail records as being booked for charges of rape, assault and unlawful imprisonment. He also shows a prior arrest for trespassing in a home in Magnolia.

A November story in the Seattle Times shows photos of a “Chris Teel” as a resident of Ballard Nickelsville. The man is shown getting ready for the move to the Northlake Nickelsville camp.

The woman was taken to Ballard Swedish Hospital.

“We’re shaken,” Moran told My Ballard, who says her thoughts are with the victim. “The effects on all the employees are no where near what this customer was assaulted is experiencing. There’s a widespread concern about her.”

Moran said she’s also concerned about the rising homelessness and crime in the neighborhood.

“We’re a company that’s been around since the 1960s, and nothing like this has happened,” she said. “We used to not see tents on the sidewalks, or part of the sidewalk, even a couple years ago. And now we do. We see an increased number of vehicles that people are living in. The challenge that creates — not all of them are bad and criminal, but some of them are. And we’re trying to navigate through that as employees and a business here in Ballard.”

It looks like the first tip about Monday morning’s rape — which occurred several hours before the head tax vote — appeared on the Safe Seattle Facebook page Tuesday evening. The first media reports appeared this morning.

Seattle Police has yet to post details about the crime online, as it typically does for newsworthy events. We have reached out to SPD, which has yet to respond.

“Ballard is such a great community,” Moran said. “I sure hope that something gets figured out and something changes, because what’s going on isn’t working and getting worse and it’s affecting us greatly.”

Monday’s rape is the latest in a series of crimes in the Leary Way area of Ballard. Last month a man was shot and killed just two blocks away from Carter Volkswagen. A week before that, a man was found murdered in a camper on 15th Ave. near the bridge. In November on Leary Way, a man was set on fire and critically injured.

Last year a sex offender was arrested for attempting to rape a woman in the Golden Garden’s restroom. He was sentenced in March.

Does Mike O’Brien have a statement on this disgusting example of violence against women?

Conveniently not in the police blotter on Monday as to shield the truth from the public as a vote was carried to extort businesses for a head tax.

I’m so tired of this clown. Hire some officers and clean Ballard up… don’t attract people here… as this rapist was. Followed a 40 year old women out here from Texas.

Perhaps it is time to vote O’Brien out of office.

Terrifying! I hope this poor woman gets the support she needs to deal with this traumatic event.

I can’t wait to read Elenchos’s take on this.

@JOHN KLINE – Since not all crimes are added to the blotter in real time, please share your evidence to support the conspiracy. Also, he did not follow her…he came here from Texas, but it was stranger-on-stranger here. Outrage at this is great, but it’s still no excuse for spinning a crazy quilt from Dori’s threads.

Any coincidence that the dealership is next door to the Ballard Food Bank?

Time for Ballard to deannex from Seattle, maybe Shoreline would still take us? We need a functioning police department and school system. Seattle offers neither.

At a minimum we need to bring in a private police force like they did in Magnolia and Queen Anne to enforce basic laws. The only laws SPD is capable of enforcing are related to parking…unless you live in your car and you are free to park for as long as you want, wherever you want.

What does Mike O’Brien have to do with this? Some of you people are unhinged.

I am fake OUTRAGED!

Why isn’t there a police officer stationed in every temporary bathroom in Ballard!

Nick.. gotta do your homework before you let O’Brien of the hook. Please educate yourself… or simply let that little kid in your avatar run around under the Ballard Bridge for a few minutes.

You’ll clue in really quick why O’Brien needs to go.

Nick, what is wrong with you? Why don’t you give us something positive about O’Brien?

Anyone want to guess which tiny home encampment he stayed at?

If you assert that O’Brien is somehow responsible for this rape then you are on the hook for explaining that.

Castrate the guy! Hang the parts removed over the door at the Ballard Food Bank.

Hint: it’s the one that had a banner that says “Ballard Loves you.”

Hint: it’s the one that had a banner that said “Ballard Loves you.”

“…one tackling the gentleman…”. Gentleman? Great reporting My Ballard! Ugh!!

You call the rapist a “gentleman” Wow! That’s not what I would call him.

Nick. its liberals like you who need to be spoon fed that are really frustrating. Its not a hard storyline to follow.

O’Brien. Sawant. Bagshaw. All of them are the problem and responsible for the vagrants, homelessness, and drug addiction that lead to these types of crimes.

Open up a paper or turn on the radio. Turn on your brain and the lights out on O’Brien’s political career.

It’s O’Brien’s policies of enabling this crap, Nick. If he’s going to call these campers “vulnerable community members,” he better be ready to be called out on that.

LOL, “the police are worthless and never show up!” Except they came right away and captured this guy.
“Mike O’Brien is responsible for everything!” LMFAO It turns out it Is your fault. If you want change, then make change happen.

Mike O’Brien didn’t cause homelessness in Seattle, nor are all homeless responsible for this rape. Grow up.

Nick is the troll this community needs. No one is responsible! Blame is not to put on anyone. Continue on. Nothing to see here.

For those mentioning the “gentleman” comment, that’s a direct quote from the manager at Carter Volkswagen when she spoke (very emotionally) on KIRO Radio.

Quote marks that reference a person = direct statement from that person.

We’ll also take this opportunity to remind everyone of our comment rules, and to please try to keep things civil: http://www.myballard.com/comment-rules/