Car flips upside down on Market St. – My Ballard Skip to main content 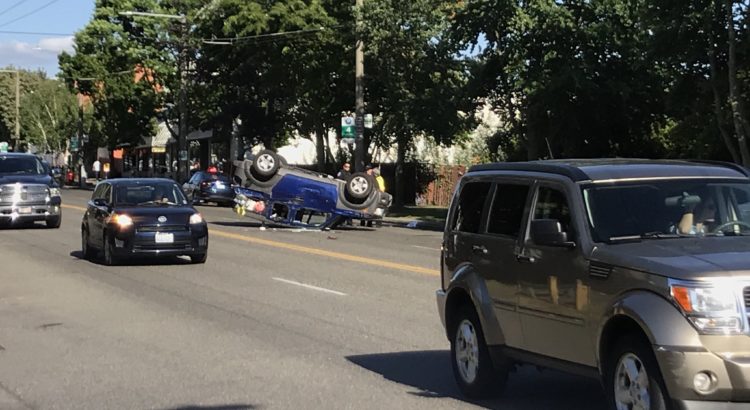 A Honda Element flipped over on Market St. this afternoon just west of 24th.

Fortunately, there were no major injuries, according to Seattle PD.

If you mean the same business, it’s actually the Ballard Academy of Driving. I used to work there. They prefer to be known by their acronym B.A.D.

Before we start, please adjust your seat belt.

I was parked along the side of the road, looked up when I heard the collision to see the blue car swerve and then flip. While I was calling 911, I saw so very many people run to the aid of the driver in the overturned car. People pulled over, came running out of businesses. Helped the driver out of the car. Helped move passing traffic. It was uplifting to see the community mobilize in such a quick and positive way over something so scary. Once I had 911 on the phone, they told me that they already had several people calling them and that help was on the way. I’m so glad that there weren’t any major injuries. Thank you Ballard for being so amazing in a pinch.

This happened last September on 65th @ 22nd NW. There the women was STILL yakking away on the phone while people pulled her out. How the bleep can this happen when speeds are so low? I’m certain it wasn’t inattention. No way. I hope their insurance goes up along with a ticket for their efforts. It’s a shame people put others at risk like this. Unless a medical emergency, NO excuses.

As I was walking by the accident-fire and police already with things under control, I was wondering to myself:
How does one flip a vehicle on Market Street where the speed limit is less than 30mph?

From what I saw which wasn’t everything, it was probably an angle/physics thing. It didn’t flip right away. Swerved first.

One car was headed W on Market and the other was pulling out of the garage of the apartment/condo building next to the Mailbox Center.

@Scott: How the bleep can this happen when speeds are so low? I’m certain it wasn’t inattention.

@john: How does one flip a vehicle on Market Street where the speed limit is less than 30mph?

You both realize that people speed like selfish assholes down Market, 15th, 24th and everywhere else in the City. Although Momosea above me has indicated it was not due to speed.

Pretty cool to see fire trucks put to work for something other than junkie overdose response and hobo control.

I sort of forgot the sirens could mean anything other than social justice bringing “vibrancy” to the neighborhood.

Hope the driver was ok.

From the picture it looks like someone installed a lift kit. You have to be careful with those, they raise the Cg of your car and make it prone to flipping at speeds below 30 mph.

Jeff – when you overturn or jack a car up the shocks expand which is why the tires look further from the wheel wells than when right side up. Don’t think this element was lifted.

I agree this car is definitely lifted. I think I’ve seen this Element driving around with loud music and hydraulics.

The SDOT has to hire leadership training consultants due to coach their woefully inept upper mgt.
This was brought to to light in a series of Seattle Times articles recently about the $12mil per mile bike lanes and the SDOT admitting they wouldn’t be able to deliver their promises on the recently approved levy.

Can we stop with the 12 million per mile bike lane fabrication. The total cost for the bike lane portion of the reconstruction was 135k.

Does anyone remember that when they first announced they were building this big condo they said they were planning to put the driveway on the north side (on 56th) not on Market…. I wonder what happened to that!

For the record I’m a cyclist but his stuff is sadly typical of our loony city. Now is it any wonder the infrastructure is a huge mess? Potholes? Yeah they’ll get right on that, I’m sure!

Of course the most important thing is that I’m not responsible for this!

If you read the article it’s not the bike lane that is the expensive part, but tearing up the entire road (including sidewalks and streetlights).

A direct quote from the article, which wildly goes back and forth between different numbers:

It’s the other stuff — curbs, engineering, sidewalk retrofits, traffic control and especially drainage — that can break the budget.

So they could have gone cheap and slapped some paint down, which would have conformed to the national average, but they decided do the bike lane right. Also, they’re taking advantage of construction and doing some much needed maintenance.

So yeah…the four times the national average was a moot argument before you even started.

Potholes? Yeah they’ll get right on that, I’m sure!

Let me guess, you’re one of those people that sees a pothole and then complains that SDOT does nothing until you’re blue in the face? A normal person would file a pothole request with SDOT. I’ve done so twice and both times it’s been fixed within a week (they claim three business days).

Hey Truth, we missed your comments after the latest felon hobo sexual assault.
Glad to see you’re still fighting the good fight for all Ministry of Revenue, Comrade!