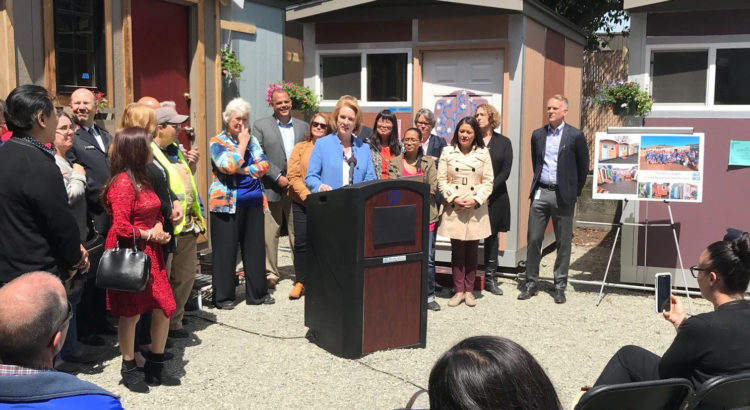 In a media event at the new Whittier Heights Village for Women, Mayor Jenny Durkan announced a short-term plan to get more homeless people off the street.

The plans aims to increase the number of shelter units in the next 90 days by 25% to serve an additional 522 people every night.

“Our shelters have been running at 93% full for several months,” Durkan said. “We have no place to move people that is safe. So I understand that this city is demanding results.”

She added, “We will not serve everybody, but it will make a marked difference.”

To add the new shelter capacity, Durkan said the city will add capacity to existing shelters as well as open two more tiny house camps: one at 18th and Yesler and another in South Lake Union, most likely at 8th and Aloha. The Whittier Heights Village for Women on 15th Ave. NW near 80th St. will open soon with room for 19 homeless women. The city will also offer temporary housing at Haddon Hall, an apartment building in Belltown.

Durkan said this is just a short-term boost to accompany longer term efforts to address core issues like behavioral health and affordable housing.

Councilmember Sally Bagshaw also spoke at the event, calling on the state to help the city and county in the fight against homelessness.

“I want to call on our governor today,” Bagshaw said. “We need the help from the state and the region to do this, we cannot do all of it on the backs of Seattle taxpayers.”

The mayor was asked “why the city refuses to answer questions” about tiny houses camps — specifically plans to build one in South Lake Union.

“We are committed to real engagement. We want to hear from neighbors what their real concerns are,” Durkan responded. “I want to be as transparent as possible.”

She also admitted that the city needs to do a better job evaluating data surrounding tiny houses camps to get a better sense of impact and success.

We deleted a comment from a poster who used an offensive name as the handle.

This is type of bizarro puritanical progressive nonsense is why our city is full of junkie hobos while we’re being robbed blind by taxation and/or outright theft. I get woken up several times a week by screamed obscenities by our precious hobo felons and you guys want to play kindergarten cop on the comments. Funny/sad/predictable.

“Kasey Lebechuck was coming home Sunday evening about 6 p.m. when he noticed a homeless man setting up camp near his Northeast Portland home, his daughter said Tuesday.

She said he approached the man and asked him to move. At first, he said, the man seemed willing, telling Lebechuck he was reaching into his backpack to get his cell phone.

The man, later identified as 25-year-old Todd Schneider, pulled out a knife and attacked Lebechuck, police said. He suffered 17 stab wounds in the head, neck chest and torso, his daughter said. Lebechuck, who is in his mid-60s, tried to fight back, according to his daughter, but the younger man repeatedly pushed him to the ground and continued the assault.”

You posted that irrelevant (topically and geographically) article a few days ago. We get it, you have a weird fetish for this stuff.

Same problem in Pdx and same lack of response from city leadership. Relevant. Apparently you have a weird fetish for turning formerly safe NW cities into crime infested hellholes.

This article is about providing housing for homeless in Seattle.

Your article is about a particular crime in Portland by a known sensationalist news site.

“93% full for several months,” Durkan said. “We have no place to move people that is safe.”

I would like to point out, I don’t not demand results, will continue not serve anybody, refuse to answer questions, and am not committed to real engagement. Once Again, they Mayor Gets it Wrong!

quit being such a crybaby.

Nice literary reference. The soy brigade doesn’t seem to read much despite all their intellectual pretensions. The mayor has hobbled the cops, soaked the taxpayers, and now looks for some P PC photo ops (women’s housing) instead of answering criticism. I did like Mike’s little passive aggressive trick having the social justice warrior answering questions in email form only at the infamous town hall meeting he couldn’t control. Very Seattle.

Why shouldn’t I? These warrior people draft all of my legislation, why stop there. Homeless advocates work for peanuts, so its win win! For them its more about meeting their emotional need to fix the world, than gainful employment, and if they actually fix the world, they will live empty lives… see we need to fail at this.

More smoke & mirrors from the politicians..They are afraid of My Ballard…. Oh, the Tarps are Bluer in Seattle…

Make them work for it. Nothing should be free.

I’m embarrassed to live in Ballard with these biggots.

If you sound out Mike O’Brien’s initials it becomes MMM Oh Bee…Moby! All this time, Mike was moonlighting as a techno musician!

hopefully they got some take out food and had a lovely lunch/picnic at ballard commons…i’m guess they didn’t go near there, or st pukes.

Yes the “Feed the Felons” outreach ministry has really turned Ballard into a hub of culture.

There, I fixed the headline for you.

Mike O’B seems conspicuously absent, but nice to see Sharon Lee’s smiling mug, satisfied that her $180,000/year salary as director of Low Income Housing Institute is safe for at least another year.

Of course he is. The drunk old Norwegians are gong to kill someone eventually.

Sharon Lee and the low income housing Institute is a real JOKE its all about money with that band of crooks.I lived in SEATTLE the last 14 years and just moved 2 months ago. Just couldn’t afford to live their anymore. Living on a fixed income that doesn’t fixes anything. Worked all my life and now i can’t afford to live in the the city i love so much because i can’t pay rent and the 700 dollars a month for meds that the insurance just stop paying for after paying for it for over 3 years. The American dream is turning into the American NIGHTMARE

Part of the city’s “Feed a Stray, Get More Strays” program.

I’m still waiting for special lanes for drinkers/drunk driving. I truly hope we get these ASAP, as people are dying and children injured.

Guest
anyone but mike

I still can’t help but thinking that all this money spent on emergency housing is preventing us from achieving a long-term realistic goals. (such as housing all children, and transitioning X number of people into permanent housing per year, and send X number of people into rehab facilities per year). Why – why – why do all (or almost all) of the homeless services need to be in Seattle? Wouldn’t it be much cheaper to build low-income housing in Kent next to a park and ride, and then pay for bus passes for everyone, instead of building low income housing in Belltown, or Ballard or West Seattle where real estate is 4 times the price? This is not a NIMBY comment, just a comment on how can we use our resources more effectively. Why build a 20 unit low income complex for $10 mil. in a high density area of Seattle, when you could build a 40 unit complex for the same price somewhere that is still an acceptable commute time to the downtown core so that jobs could still be accessible. If I were mayor/city counsel I would change Jackson Park golf course into a 9 hole golf course,… Read more »

No it’s much more important to virtue signal and soak everyone for tax money to hire consultants while bashing the critics as “Russian Bots” or “Trumper Nimby’s”.
This is such a basic b**ch hustle that It’s absolutely embarrassing to watch voters buy it into the 3rd year of the largely manufactured crisis.

Gee, who knew having a drug tolerant city with a mild climate and tons of freebies and no cops would attract an army of squatters. Lot of Dunning Kruger going on in City Hall.

Tent cities and little houses are basically an admission that most of the hobos are unhouseable. Now, they can’t admit that, because capitalism and home owners are evil, so they build these facades to help their moral primping.

I’ve been saying much the same thing – why not put them where there is lots of open space, such as North Bend, or Duvall – places where they have room to spread out? Because it’s farther from essential services, but also (and let’s be honest here), there’s lots less to steal out in the middle of nowhere. The approach undertaken by the city “seems” to be failing (I’ll put that in quotes since I don’t know the stats), but we seem to find new ways to funnel money into this approach.
We should care for our fellow man, and I think we do – and would, moreso, if we knew how to separate those who: want to work, and want to get clean, vs those who: want to do drugs, want to live off the grid, want to leech, and don’t want to work.
Unfortunately, using a blanket instead of a band-aid might cover the wound, but also lots of other area as well.

Because they have to be near the jobs they don’t want.

Stats came out today. They are failing.

LOLOLOL That’s up to Kent not Seattle. Geeeeez.

Yep feed and house them and they will stop coming to this city !