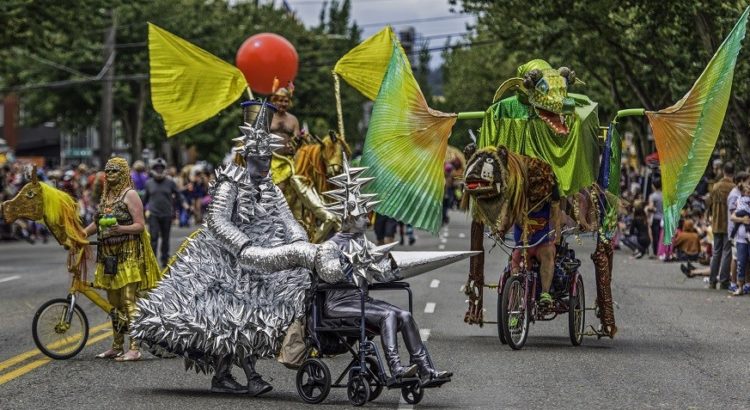 It’s Fremont’s biggest weekend of the year, and the forecast is sunny and warm. The occasionally-naked and always-colorful Solstice Parade kicks things off tomorrow (Saturday) and the Fremont Fair runs all weekend.

Streets start closing at noon, and that’s about the time the naked cyclists typically make a swing through Ballard to get the blood flowing, often bewildering drivers. Then they head out in advance of the parade, starting at Leary Way and 39th at 12:45 p.m. The parade officially begins at 1 p.m.

We asked the Fremont Arts Council what’s new this year, and they gave us a sneak preview:

Super Moi! is bringing 7’6″ tall rollerblading muppet races. Paradisiax Parasol Project has built a 12″ tricycle-powered parasol tripod. The Seattle Steam Rats have recruited volunteers to build a huge steampunk moving creature with meticulously hand cut gears. The Seattle Women’s Steel Pan Project has transformed a stage performance “Tides of Change” into a probably one of the largest and longest parade ensembles we’ve ever had, incorporating sculpture, music, costuming and dance.

That’s as Fremont as it gets, folks.

This is the 30th anniversary of the parade, and it’s always a packed event. With all the population growth, you might want to head out a little earlier than usual to carve out a spot along the route. (Parking? LOL.) The parade heads right down the middle of Fremont on Leary/36th to Fremont Ave. and then over on 34th to end at Gas Works Park (route map .pdf).

The theme for the Gas Works event this year is “Varieté.” It will feature audience participation events, “fire art”, live music, dancing, a beer garden (with Fremont Brewing, Hale’s Ales and Schilling Cider) and food trucks, to boot. The celebration will run all afternoon and evening.

Once the parade is over, the weekend shifts into the Fremont Fair, which supports the Fremont Chamber of Commerce. As many as 100,000 people are expected to attend over Saturday and Sunday for the hundreds of artists, craft vendors and food booths — not to mention the music lineup and LOTS of beer (especially Corona, which is a big sponsor.)

Have fun out there!

(PS. For more events going on this weekend, check out our calendar).

Parking is available at the B. F. Day Elementary School playground on Linden. Just a couple of blocks from the parade route, but easy egress. I think it’s $20-25 and all proceeds fund the school’s PTSA.

Don’t worry, nobody in Seattle drives a car.

Solstice is satanic. Repent and put on some clothes.
Paganism has led Seattle into a morass of filth, crime, disease, and wearing socks with sandals.

LOL Your name is superb!

What time is the Wicker Man?

Love seattle and the Fremont trolls!

At one time it was great! Just like the rest of the puget sound.Unfortunately the politicians have done their best to destroy Fremont as well as our entire region! Their lack or desire to do anything about the mass influx of non Washington. State residents that’s created the housing issue. Topeld with archaic views on substance abuse blended with the extreme leftist let’s give everybody s hug because its not their fault views.of the new Seattle lite that has allowed my city 2 be over run with lazy entitled smelly dirty bums with not an ounce of self-pride that can’t even be bothered to wash the dirty nasty motorhoms or pick up their own trash or hypodermic needles from outside their tents that are occupying my sidewalks through walked on high stupid hipster they’re too lazy to find their way back to Portland it misses you we don’t want this many of you the whole damn world’s gone crazy got this idiot in the White House but mostly what’s made Fremont lame is the overabundance of week little cry baby dbags like you who are such tools that they write things like Fremont. Is. Lame! Screw you Seattle please grow… Read more »

“about the mass influx of non Washington State residents”

Yes, we need to build walls. What right do they think they have in America to move to a different state? Start the wall along Phinney Ridge. I’ve seen way too many Audis and BMWs up there.

BTW there’s two groups of people who support the wacky leftism here. Young college students with too much free time on their hands, who have never paid their own bills and are terrified of the prospect of doing that. Second group are the old school gray-haired Seattle hippies who’ve lived here for 50+ years and still don’t realize Birkenstocks and socks look stupid. Most new comers I meet are not loony leftists.

If anyone sees Mike O’Brien at the Parade or Afterparty take a picture and post it here.