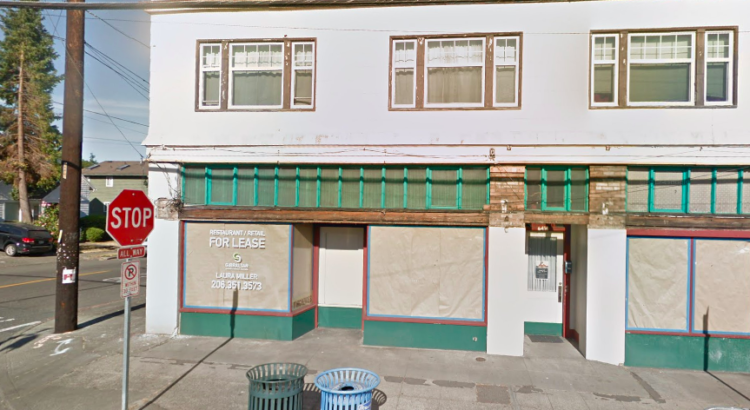 The eagle-eyed members of the My Ballard Facebook Group saw that the “for lease” sign has disappeared from the empty space at the corner of 32nd Ave. NW and NW 65th St.

A little investigation later, they found a new restaurant planned for the Sunset Hill spot. It’s called Samara, “a wood-fueled neighborhood bistro,” according to a calendar post on Addo Ballard.

That’s because Addo Ballard — Eric Rivera’s restaurant incubator that’s running (and expanding) at the Royal Drummer — is hosting Samara chef Eric Anderson on June 21st to try out some of the upcoming menu items.

“Get your first taste now, before this future Ballard restaurant gets it’s home just down the street,” explains the Addo listing, which says Samara will open in “early November.” The cost for the Addo event is $50 per person.

So there you go. By the way, the My Ballard Group has been growing like wildfire lately, now approaching 5,000 members.

Ooof! The fact checker must be huffing glue because that Addo event has been canceled.

Thank you for the kind comment, where did you see it’s canceled? Still active on the calendar.

I received a call from them because I’d signed up for it.

Very happy something is finally going in that space. I wish them luck! Hope they have brunch.

Noooo not brunch! Well, it’s okay as long as they offer an equal number of -UNCH foods, and not subject everyone to merely BR- options. Too many restaurants seem to assume everyone wants to eat second breakfasts or eggs at noon, and not provide options for people who don’t sleep in on weekends. That said, I do miss the brunch crepes Picolino used to serve. So, so good.

I read a headline about that, but nope, I’m not really a IHOP or IHOB kinda person. I tend toward breweries that serve lunch, and/or small local restaurants that have good burgers, sandwiches, salads, and beer. But I still hope the new restaurant does well.

So…this will be a traditional restaurant, yes? Either way, I’m glad to see there will be a business in that spot. Picolino could use some competition. Evening parking might get a bit crazier, but, hey, maybe that will help bring local bus service back to this part of Ballard.

Parking for Piccolino is already tough. Which is a bummer since Piccolino is a good restaurant. I wish the new business across the street the best.

That space was a store called, Second Hand Rose and was, of course, a second hand store. It also was a video store for a number of years. I used to walk to it with my grandkids so that they could choose the movies they wanted. My two eldest grandkids worked at Picolinos, the restaurant across the street.

Rain City Video was there for over 20 years – I am still grieving its loss.

If I remember it was also a pharmacy in the fifties

Or it was a variety store with a soda fountain (how many of you except us old farts remember what a soda fountain is? Where is picolinos? Is it next door (fronting Loyal Way) where there used to be a small mom &. Pop grocery store, Hoeffers or Zundels?

Bjarne, Picolino is on the NW corner of 65th and 32nd. And I do believe the spot where the new restaurant is going (directly east across the street on 32nd) WAS a pharmacy. I think some McKesson signage survived on their north window. I wouldn’t be surprised if they’d had a soda fountain. There’s a Sunset Hill author who lives in the neighborhood who would know, but I haven’t seen her post recently.

In that neighborhood they best sell white bread.

You are 15 years out of date – the neighborhood has completely turned over.

If MyBallard was actually involved in the community, they would have known about this instead of having to once again rip off the info from their garbage fire Facebook group.

I learned about this restaurant by listening to the police scanner.

I noticed that too. But perhaps the restaurant will be in the larger portion of that building, and they’re still trying to rent out the smallest space on the north end. Time will tell.

I’m passionate about education, technology & fiscal accountability, since these are prerequisites for prosperous & strong future of any community and nation. As part of my campaign “Adil Baguirov for the Dayton Board of Education
https://aboutadilbaguirov.wordpress.com/

Great Article. Adil will fight to make the Ohio Checkbook Initiative mandatory, to identify fraud, waste and abuse, and operate the office of Recorder in an efficient manner.2018 elections.

thanks for sharing the good informations…

This is a nice article.Thanks for sharing.
http://www.mginfomatics.com/services_android.html

Thanks for providing the valuable info.
http://www.mginfomatics.com/services_digitalmarketing.html

What does this have to do with the topic at hand?

Thanks to have your suggestions on this particular article
http://www.mginfomatics.com/services_android.html

Nice.Interesting blog.You are posts are just amazing and very creative.Keep on share it.

nice information for me