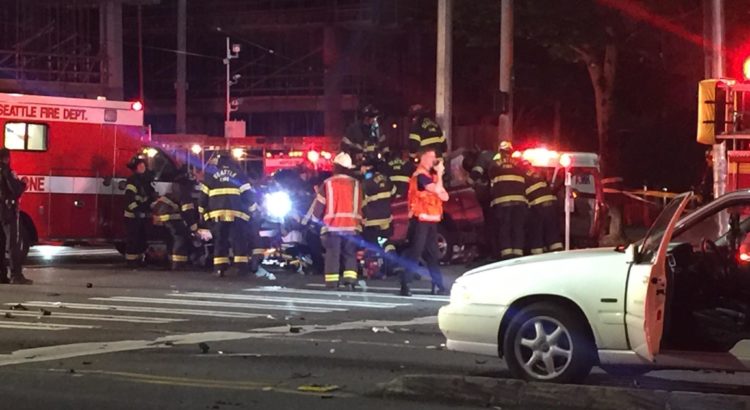 Update: Seattle Police says the driver of the pickup truck drove through a red light while traveling eastbound on Market St., colliding with two other vehicles before ramming into a pole and utility control box. Another vehicle was struck by one of the other cars.

The pickup driver died in the crash, and the passenger was injured. Two others were taken to the hospital for minor injuries.

Earlier: A pickup collided with a pole and a utility box at Ballard’s busiest intersection just after midnight on Friday morning, killing one of the two occupants, Seattle Fire said.

Other vehicles were also damaged in the crash. A very large response of firefighters closed down both 15th Ave. NW and NW Market St. as they worked on extricating the two trapped patients by sawing off the top of the cab.

A man was pronounced dead, and a woman was taken to Harborview in stable condition. Investigators will be working at the scene for several hours. No word on how long the intersection will be closed, but it should reopen in time for the morning commute.

(Our thanks to Silver for the photos.)

Terribly sad. I heard so many sirens I had to look up what happened. Is it known why the collision occurred?

Wishing healing to all involved.

No word on what caused it.

I’m pretty sure you can’t heal the dead guy.

The truck hit a pothole

… and was going too fast? There’s no potholes in the vicinity that would cause such an accident at normal speeds.
There’s an awful lot of firemen standing around in the photo. Is it the end of the month, get your OT time again?

Barney, you are obviously very intelligent.

I do not appreciate you comment. You clearly do not have any idea how many people it takes to care for people who are in a very bad way. To make a comment about overtime when these men and women are working to give the person a fighting chance to live is Appalling. If it was one of my loved ones I would want all hands.

The fire station is 100 feet from the accident. Did you expect the “firefighters” to cower in the basement?

How many accidents on 15th does this make recently?

All it takes is one accident for people like you to overreact.

Not hitting a Pot hole, he hit a Light pole.

Wouldn’t it be easier to just remove the morons, like you?

According to the report on KIRO’s page, the following seems to be what happened:

“Investigators said it appears that a Mazda pickup ran a red light heading eastbound on Northwest Market Street and collided with a Toyota and a Volvo.

The impact forced one of those vehicles into a Toyota SUV. The pickup hit a traffic control box on the corner of the intersection that knocked out power to the traffic lights in the intersection.”

“Ran a red light” sounds to me like the driver was under the influence.

I’m sure the truck being lifted and having a high CG (center of gravity) didn’t help either. Maybe they need to stop allowing lift kits for public safety?

The number of lifted trucks in Ballard is obscene. I wouldn’t surprised to see a lifted zamboni at the ice rink.

Except it’s not lifted.

It wasn’t a lifted truck.

Are you sure? It looks that way.

Sounds like this driver paid for being in a hurry with his life. Maybe he was drunk, maybe he was high, maybe he was just stupid and not paying attention. Maybe it was none of these things, and maybe it was something most of us have done while behind the wheel at one point or another. He hurt a lot of people, and paid for it with his life. The rest is up to the insurance adjusters and courts to decide.

yeah you don’t know why he ran the red light but def call him stupid. and dead.

He was in a argument with his girlfriend apparently, and trying to teach her a lesson. He was a friend of mine. R.i.p. JT

Only his name wasnt jt it was phillip T. He was a lifelong friend of mine. Sonya (his mother) if you happen to read this i want you to know i havnt stopped thinking about you and what you must be going through. Im very sorry and i hope i see you soon. So very sad i am. Always love you Sonya!!! J. B. Camano days..

We’ve updated the story with new information from Seattle PD.

Very sad. He ran a red light and reached his destination a lot sooner.

His ‘final destination’. The first movie had a pretty interesting plot but I feel all the follow-on movies kept replaying the same theme. I wish there was more ingenuity in those sequels.

If a speeding drunk driver cannot drive down our streets safely without harm, we clearly must eliminate light pole privilege.

Better yet- perhaps we should have a designated strip of road where you can drive as drunk as you can…of course with proper supervision of course.

We have. It’s called Spanaway.

Our family has been in Ballard since 1925. Has there ever been a fatal accident on Market before this? Condolences to the family.

Frankly I’m kind of disappointed the SFD spent so much time extricating a dead body.

There were two victims in the pickup, and the roof had do be cut off to even reach the driver to find out his condition. In the top photo, the firefighters on the left are clustered around the female victim who has just been removed from the pickup. Those on the right are attempting to extricate the driver.

The scene was taped off for so long because the collision investigators had to document the scene before anything got towed.

My family mentioned a death on Market St two years after moving to Ballard in 1922.
I’m surprised you didn’t hear about that one.

A similar mishap occurred this morning (Sunday) at the elbow-curve connecting Leary with 36th. A car wrapped itself around the base of a 30-foot utility pole, knocking it 10 or 20 degrees off the vertical. Police blocked the road between 3rd and 1st. Aves. NW. while a utility crew either righted or removed the pole.

The Twitter police feed on MyBallard reports a DUI investigation at the intersection this morning.

Wow. I was out of the area and missed that one completely.

The incident could have been avoided. The man was in a rage of anger with his girlfriend and was negligent at the wheel. He was a good friend and so is she. Please keep negative comments off this blog for respect of his mother. She’s grieving for she has lost her only son in this tragedy. God bless all of you, stay safe out there.