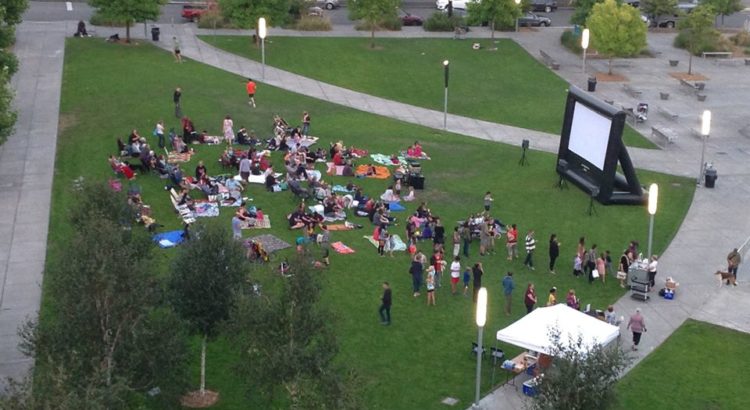 Ballard Commons has become a popular hangout for the homeless over the years. It’s also one of Ballard’s best parks — especially during the summer months — thanks to its central location, ample green space and kid-friendly spray fountains.

This summer the Ballard Alliance is “cranking up the activities” in the park thanks to grant funding from the city. The newest addition is “Summer Fitness in the Park,” a free event every Saturday at 10 a.m. This Saturday will feature a yoga class from We Yoga Co., then circuit training on June 30th from Fit36, Zumba from Ballard Health Club on July 7th and yoga again on July 21st.

Then “Movies in the Park” will kick into gear in August, running every Thursday from 8:15 to 10 p.m. It starts with The Goonies on August 9th followed by ET on August 16th, Ferris Bueller’s Day Off on August 23rd and Raiders of the Lost Ark on August 30th. Sweet Mickey’s will be open from 7 to 10 p.m., and a food truck will be on site, as well.

And of course, SeafoodFest is right around the corner, July 13-15th, which will feature events in Ballard Commons on both that Saturday and Sunday.

(File photo of a Sweet Mickey’s movie night in the park several years ago.)

How about a Junkie Hobo Show? The winner gets to control the turf in front of the library for an entire month during “Junkie History Month” as sanctioned by Mayor Durkan.

Runner up gets to beat up old ladies and crap in Commons Park without getting a warning and hug from the SPD. C’mon, Ballard, let’s get creative!

Will this interrupt the daily “Bum Fight” show that Elenchos likes to referee?

Yeah, kid friendly fountains – until one of the dirty homeless guys approaches a nice white Aryan child and pulls his shorts down while his mom is too busy getting drunk on rose.

When are we gonna bulldoze all the smelly shit that the homeless have piled up here? Maybe then it can be called a park. Right now it’s a cesspool at best.

Can we have a “Ballard Reclaim your Stolen Property Day”? Lots of people would attend that.

Gender is a social construct. Except when a man is born with a female brain. Then gender is a biological reality.

– Gender is a construct, except that the “future is female” not trans etc.
– Race is an illusion, but white people are evil and everyone else are literal saints
– Dogs are people
– F*ck your beauty standards, but guys better be 6′ tall with abs
– F*ck your beauty standards, but we’ll tax your pop
– God is a lie but marketing is truth if has enough rainbows involved
– Racism is everywhere but we only hire healthy yuppies under 35
– We’re moving to Canada if Trump is elected (never Mexico, Iran, Somalia etc)
– Guns and misogyny are evil but Rap Music is a misunderstood cultural jewel, you racist
– Anarchy Now! (until then we will bleed the lower middle class dry with taxes)

I could probably do this all night.

@Lex
Haha yes, a man with a pair is now either “incel” or a “womanizing bro misogynist”! LOVE IT

Bike theft breakdown workshop Wednesdays, would be another event the City should host. Or, how about walk around Tuesdays, with the ol’ John Thomas out for a stroll. Or, we just say, “Dude, the barn door is open”?

I know a few ” special Op” type guys that will solve the infestation for Bitcion ! One of them has his coffee at Starbucks on market and 22nd goes by ” Dr.Clipper ” ! Your Ballard will be safe and clean but freedom isn’t cheap my friends …

They should put up an MMA cage and let the guys just eliminate each other. That way someone doesn’t need to call the fire department 5 times a day to break up fights in a park that used to be enjoyed.

These losers are all backstabbers, sucker punchers, and c**K punchers. They wouldn’t know how to go toe-to-toe.

Sounds like fun. Although I just wish a few “upitty women” would gather up and take back this park. The current shlub occupants wouldn’t fight a woman, would they? The police are already too busy to do much, and besides, their hands are tied by the city council, lawyers, etc. ‘s That, or you get to explain what that man is doing over there in his RV, bushes, or sidewalk. In fact, it’s time to take back a few places. Enforce existing laws.

Sadly, they are more likely to attack a person of lesser size.

Nice article, thank you. Even as it is (yes, the facts in the negative comments are generally true), I love having this park close to my house. Knowing of upcoming activities is good. (If your editor, i would have deleted the first para of you post, which is IMO gratuitous and also counter to the purpose of your post.)

If you live here you can see upgrades to better stolen bikes.

As a resident next to the park I look forward to these activities, specifically the movie nights, as they tend to be the only evenings when it actually feels safe to be in the park.

The spray park has become a bit of a disaster with then number of kids out there a fraction of what it was just 4-5 years ago. The Honey Buckets (picture above was from before they were installed) and homeless using the spray park as a place to wash their clothes have been the worst changes.

Even if you hate the homeless I’m hoping we can all agree that it would be much much much better for all of us if they had a clean and free facility where they could go for basic hygiene. The Honey Buckets look terrible and are terrible. Replace them with a 24 hr accessible facility in the church complex and the city/church/community can coordinate on funding.

I love this idea. Who can take action and make it happen?

Great idea? They already have one. It’s called the Ballard Urban Rest stop. It opened 5 years ago. But these bums prefer the spray park.

These are junkies. The very reason we have so many is because bleeding hearts think they will better themselves, while they prefer to camp near easy theft targets free of police presence. Most live this way by choice. There is a reason this hug-the-junkies policy only makes the problem worse.

No sh*t. And the fact that these bleeding hearts don’t realize that there’s been a scrub-a-bum facility (the URS on 57th), a block away for 5 years already, and these bums still wash themselves in the spray park and library bathroom instead, is the proof that their programs don’t work.

Feed a stray. Get more strays.

They do. Just up the street. They chose not to use it. But bums will be bums.

They do have a clean and free facility to do laundry and shower, just down the street from the park.

It would be better for us all if we had a society where homelessness did not happen. Until society changes we will have the same issues as we have today.

Wonderful if families could finally reclaim a park that’s rightfully theirs. Should always be a neighborhood gathering place not a campground. Hope it works out for the best.

Is it Bring Your Own Meth or Heroin or will the drugs be provided? BYOMeth?

…your aggressive pit bull is also a person, and we understand you cannot be separated from he/her/they in order to sleep indoors at a facility. Please help yourself to anything that isn’t locked up or nailed down, and even then, go ahead and take what you can carry. Try not to let your dog eat a toddler’s face off.

We Love You!
The Seattle City Council

Yoga for dogs when?

I like the idea of hanging out watching a show, and I have no problem stuffing any junky that may decide to bother my friend or I into their lovely porta potty. My complaint is the movie line up….The Goonies??? Really? Come on moms, your kids are stronger than you think, dont force this nonsense on them. Ferris Bueller is cool anytime anywhere. Raiders has spiders, snakes, mad natives, a hard drinking woman and Nazis that get their faces melted..not sure junior will be able to weather all those……Anyways, E.T…how bout phone home and call it a day.
Heres the line up I like (pick only three i guess) Close Encounters, Gladiator, True Grit (the new one), O Brother Where Art Thou, and Flight.

A screen in middle of the park. How Weird is that. On separate note, For Gamiss discount coupons visit gamiss code