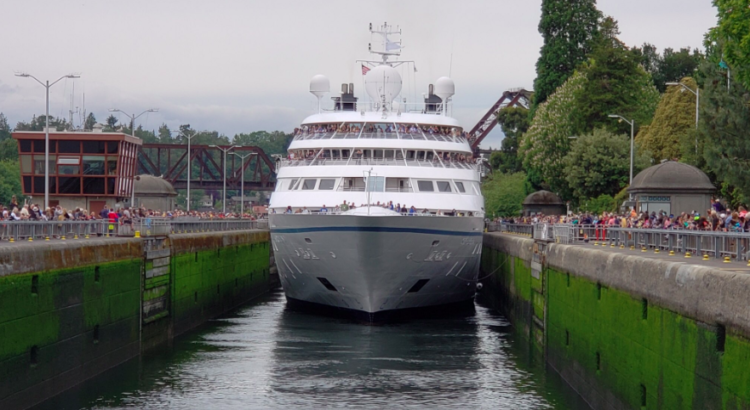 Updated: The Star Legend made history today by becoming the largest cruise ship to ever navigate the Ballard Locks and the Ship Canal.

A crowd gathered to watch the big event, along with media helicopters and a KING 5 drone:

Here’s the perspective from on the ship: Then it headed to the Ballard Bridge, where the ship exceeded the height of the bridge itself: A view from the bridge: And a shoreline perspective: It was quite the sight, and it also generated lots of free publicity — another successful marketing campaign at Ballard’s favorite tourist attraction.

(First bridge photo by Adrienne Erickson on Twitter. Second by Meghan Walker. Third by Annie on Twitter. Other photos above from Windstar Cruises.)

Earlier: The largest cruise ship to ever traverse the Ballard Locks will make the journey around 1 p.m. and again between 6 and 7 p.m. today (Wednesday).

The 440-foot-long Star Legend carries 212 passengers, and it’s taking a side-trip through the Ship Canal as it heads to Alaska. The ship will have 7.5 feet of clearance on each side in the Locks.

The Star Legend is run by Seattle-based Windstar Cruises.

This will disrupt traffic of people without jobs, like stay in bed moms.

Here are some fun facts for all you “environmentalist” Amazombies:

“The fact is that container ships usually run 24 hours a day for weeks on end – but that alone doesn’t explain the unbelievable amount of sulfur spewing out of the ship smokestacks. To understand the depths of the environmental threat brought upon by these ships, we have to realize that all fuel isn’t equally noxious – a point hammered home by looking at the contents of a shipping barge’s fuel tank.

Marine heavy fuel or “bunker fuel” is essentially the lowest grade of liquid fuel in use, with some likening the thick, brown-black sludge to liquid asphalt. Containing 2,000 times as much sulfur as standard automobile diesel, bunker fuel is what’s left over when all of the cleaner types of fuel have been extracted from the crude oil. It’s also worth noting that when this stuff ends up in the ocean due to spill, it’s extremely harmful to marine life and extremely hard to clean up. Environmental organizations from all over the world have called for a ban on bunker fuel, but for now – it’s still in currently in use.”

bunker fuel is mostly not allowed within 200 miles of the US coasts so not really relevant here.

This blog post is on the largest ship to pass through the Ballard Locks.
Your comment is on…bunker fuel I guess?

All my vehicles are powered by unicorn farts.

I’m a Ballardite but live in CA. Can anybody video this amazing event? I loved watching ships pass through the locks. Even took our boats through on occassion.

Sure, I’m a free lance photographer. Post your email address and I’ll get in contact with you to go over my rates!

Why did I get so many downvotes? I was offering to help and to do it with my professional grade equipment (eg not an iPhone held horizontally). This would have required arriving there early to get the best spot and setup time.

I’m sure he’s not looking for a cinema-quality production. And it should be in the arena of making something for the community, to share and enjoy, not profit from.

I’m sure he’s not looking for a cinema-quality production. And it should be in the arena of making something for the community, to share and enjoy, not profit from.

Gimme some of that buffet food!

World Journey is a free online game on “Unblocked Games”. By using the old car collect the souvenirs try to avoid the traps and end the difficult journey. have fun.
http://unblockedsitesgames.com/view/racing/world-journey.html