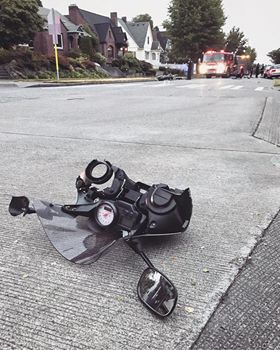 The collision happened Saturday evening, sending parts of the motorcycle skidding down the street. The dashboard was resting 40 feet away from the rest of the bike.

Fortunately the rider was alert and talking as he was loaded up in the ambulance, according to witnesses.

There’s no word from Seattle Police on the cause of the collision. Neighbors say that people often speed down 32nd Ave., a long, downhill stretch of road.

(Thanks to Mac for sending us the photo).

14 thoughts to “Motorcycle collides with car on Sunset Hill”