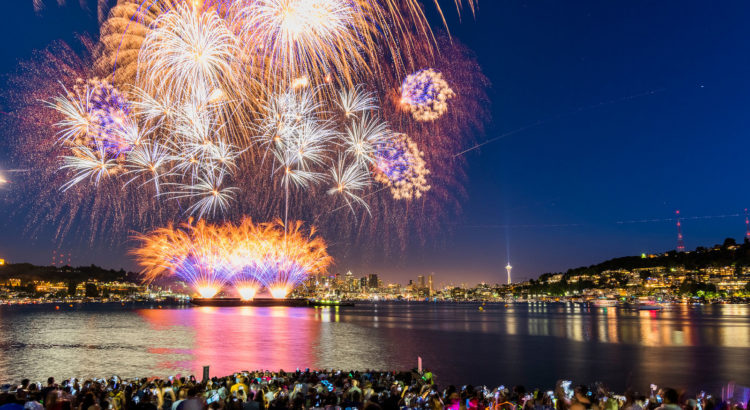 More than 10,000 pounds of fireworks are locked and loaded on a barge floating on Lake Union. It’s all for the annual Fourth of July show at Gas Works Park.

The temperature around fireworks time is expected to be 72 degrees.

Our friends at GeekWire boarded the barge on Tuesday to watch workers prep for the 20-minute fireworks display. One of the new additions this year is called “The Lollipop,” which is suspended by a forklift on the barge and rotates in a circle. And at the beginning of the show, hundreds of white strobes will float on the surface of the lake.

While the fireworks get underway after dark, the festivities at Gas Works begin at noon with a full schedule of musical acts and plenty of food and drink.

Of course, this time of year brings the usual chaos to Fremont and Wallingford, as thousands of people descend on Gas Works, looking for parking. And it’s also time for Seattle PD’s usual but very real warning that fireworks are illegal — it could cost you a fine of $5,000! — but there’s always that neighbor who fires it off, anyways.

“911 call centers are typically inundated on the 4th with reports of fireworks-related injuries and house fires,” explains Seattle PD. “Because of that influx of calls, please only use 911 to report life-threatening emergencies.”

Seattle firefighters responded to 68 fireworks related incidents last year, and there were 262 injuries. So perhaps you should just watch the Lake Union show and call it good.

PS. Happy Fourth of July everyone!!

Sounds like a threat of gun violence to me…better say 3 ‘Hail Jennies’ and drop off a couple boxes of food at the homeless camp down the street to atone for that.

But really folks- have a safe and enjoyable Fourth!

You made me spit out my rosé Champagne with that one. LOL Hilarious!

You don’t mention a time….

I was looking for the same thing lol

You didn’t mention a time…

Can we ban tweakers in RVs as a fire and public safety hazard?
Oh silly me I forgot this is Seattle.

Happy 4th, and many thanks to the CONTINENTAL ARMY AND FOUNDING FATHERS!

Stop politicizing literally every post on Myballard. Just sit back and enjoy the show nobody wants to hear your complaining l

Friend had his bike stolen AT THE FIREWORKS SHOW yesterday by tweaker trash.
Fix the crime problem, Seattle.

No wonder you guys can’t get Trump impeached. Loser mentality! Hope your wife can use a firearm to protect herself from your pet junkies.

I loved the fireworks show it was so beautiful!