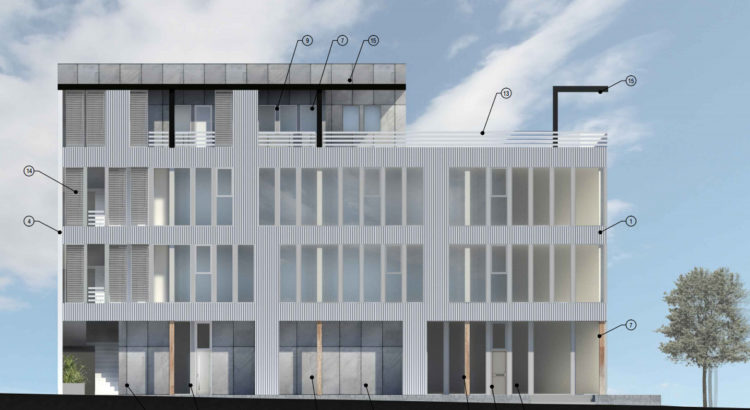 The city has approved the permit to build a 4-story office building in two lots at the corner of 14th Ave. NW and NW 51th St.

In its initial proposal, the developer said it was planning a restaurant on the first floor — now it’s marked “commercial” instead. The plans call for 15 parking spots.

The vacant industrial lot on the corner sold for $850,000 last summer. The building next door was a machine shop. Both lots will be combined together for the office project.

While residential buildings are exploding around Ballard, new office space is much less common.

(We initially posted the wrong street, but have corrected. Thanks to all for pointing out the error!)

Cool! So much underutilized land in that part of Ballard. Happy to see more development there.

Bleak brutalist crap. Cheered by tasteless goobers, of course.
Are the “architects” proud of this eye cancer, and did they intend it to look like an Excel spreadsheet?
Does anyone in this city have any sense of taste?

*looks around at soyboys, blue haired cat moms, and dorks in crocs*

LOVE IT
The roof is just low enough for one of my unstable, overworked, Aspergers-afflicted programmers to survive a leap after his “partner” dumps him for some Chad.
More grey rectilinear, dog friendly offices please!

Back-to-back mornic comments. Did you wake up on the wrong side of the bed Harley?

This is obviously a secret Marijuana farm that needed to be “sourced locally” for all these hipster thugs Seattle is so famous for. Why else would a building need green lights?

A four-story office building with 15 parking spots! Do they think they are in downtown Seattle, with a parking garage on every block? They need way more parking, otherwise, they are just stealing from the neighbors.

stealing from the neigbor’s ‘free street parking’ or are they actually parking in neighbors’ driveways?

Because you really can’t steal street parking if it doesn’t belong to anyone.

For people like Margaret here who think we need parking spots for every worker and every resident, do you really not see how much that would exacerbate already bad traffic?