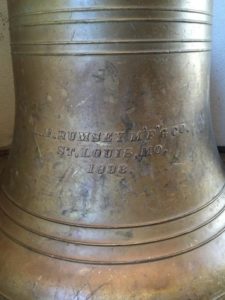 A 130-year-old brass bell that sat in front of the Ballard Elks Lodge on Shilshole Bay was stolen over the weekend.

Somehow thieves had loaded up the 800-pound bell from its resting spot in front of the lodge. Members reported the crime to police, hoping it was just a prank. Then when they started calling scrap yards in the area out of precaution, they made a sad discovery.

Recycling Depot in Georgetown told them that it received pieces of what appeared to be a brass bell.

“It’s really tough to decipher what’s stolen and what’s not stolen,” the manager of Recycling Depot told KIRO 7 when the TV station called. “We like to help as much as we can with something like this.” He said they bought the pieces for about $200.

It’s unclear how many pieces of the bell will be recovered. One member on Facebook said the bell originated from the Fremont Fire Marshall years ago.