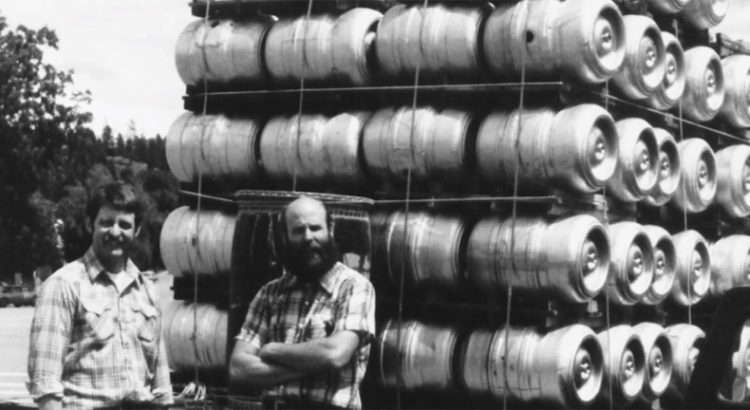 While most Ballard-area breweries are just a few years old, Fremont’s Hale’s Ales is celebrating its 35th anniversary this month.

It all began back in 1982 when Mike Hale spent a year of apprenticeship brewing at Gale’s Ales Brewery in Horndean, England. A year later, Hale’s Ales was founded in Colville, WA, using refashioned dairy equipment to make up the brewing line. At the time, there were fewer than 100 breweries in the country, the company says.

Now Hale’s is the longest-running independently-owned brewery in the Northwest.

To celebrate, Hale’s is throwing a 35th anniversary party on Saturday, July 28th from 1 to 6 p.m. They’ll have live music, vintage and rare beer samplings and brewery tours.

Let’s ask Mike Hale about his views of the junkie chaos on the Burke Gilman behind the brewery.

Stranger Editor, I’d encourage you to do just that instead of just commenting on this blog about doing that. I’m sure if you go down to the brewery, buy a pint of his delicious beer, he’d gladly talk to you or anyone else about the subject. I’d also encourage you to ask your local politicians about their views on it all too. Useless internet rants such as this accomplish nothing at all.

Huh. If these rants don’t accomplish anything, why were you guys so surprised by the repeal of the Head Tax?
You always start taking flack when you’re over the target, as they say.

If you do decide to actually talk with Mike Hale or any local politician, do us a favor and please sound more intelligent and well spoken than your last comment.

“If this ruling is allowed to stand, my fear is the City would effectively lose control of its streets,” says Holmes. “If Mr. Long can declare a homestead by parking on the street than anyone can, and the ability of the city to police its own streets would be severely compromised.”

Business owners in SODO where a majority of vehicle camping takes place inside the city are already seeing the effects.

“What has happened since that court cause is a sense of entitlement and a sense of ‘we don’t have to move,'” says Erin Goodman, executive director of the SODO Business Alliance. “So the garbage has exploded, we have huge piles of human waste in the streets and a real heightened aggression.”

(half mil without yelling on myballard works just as well, if you have a job or whatever keeps you off the online chats)

Congratulations! mongoose superpoose ipa is one of my favorites thanks you :)

@StrangerEditor:
Let’s stay on topic and not seem neurotically obsessed.

Well, the biggest junkie camp is typically set up yards from the brewery. Sorry if I have to ride past the filth and crime daily and would like the city to enforce the law. I hope that doesn’t inconvenience your refined sensibilities.

The city says it’s not a crime to be homeless and addicted to drugs so I guess it must be ok.

The Supreme Courts of the US and of Washington, the US Justice Department, and the Constitution of the US are what says homelessness is not a crime. The city says it too, but they’re just copycats who go around parroting whatever is, like, constitutional or whatever. I know, right?

The idea that you could charge anyone with the crime of being an addict is too inane to have even been considered anywhere. There was that one time Rush Limbaugh said it, but who even takes that old opioid junkie seriously?

Did SCOTUS make a ruling stating that it was legal for cities to tacitly allow open use of Schedule 1 narcotics like heroin and meth in public spaces?
I’ll wait.

What? Why do you ask? You guys can’t focus on one topic for more than five seconds at a time.

Why do I get all these down votes? I just stated a fact.

There was a time when Hales were leading edge but I feel like they haven’t kept up with the taste profiles of some of the craft beers of the last 5 years. I haven’t been there in a while so I’m past due for a visit. Maybe they’ve stepped it up. This anniversary is a good excuse to go see.

Hear hear. Right on. Order the new Leary Way Limited series. It will be a pleasure to see you again
Mike Hale

Thanks your comments. With all the new breweries locally and in the state, the market is overflowing with new beers. So it’s understandable that some beer lovers might have the impression that we older breweries aren’t keeping up. I can assure you this is not the case; Hales has been brewing cutting edge beers for decades. In 2017 Hales initiated a program called The 15 Minutes of Fame IPA Series. Every month of the year we released a brand new, unique IPA. This year we’ve continued our exploration of the IPA style with our Leary Way Limited IPA Series. Hale’s has a robust seasonal beer program, a sizable barrel aging program and a series of kettle soured beers. We also have branched out into the world of lagers releasing a spot on Pilsner and a brand new Mexican Lager. This year we won a bronze medal at the 2018 Brewers Choice Awards for our Kriek… a small batch saison we aged in barrels on handpicked Oregon cherries. We were thrilled when our flagship beer, Hales Pale Ale, first brewed way back in 1983 and the region’s very first craft brewed pale ale, won a gold medal at the 2018 Washington… Read more »

Hale’s Ales produces some great beers. That new Tropical IPA is pretty darn tasty. But my all time favorite is the Supergoose. Keep up the good work guys.

I always enjoy their on-tap experimental beers. Looking forward to popping in!

Why are there all these down replies? I don’t understand it, what’s wrong with what you said?

Someone set up a bot program to automatically downvote him. He must have said something controversial that offended Ellen or Harvey and they put him on their list. You can see this with other usernames too.

Have you tried not hijacking every new post with an off-topic rant about one of your personal obsessions?

I’ve been a Hales fan since almost the beginning. The recent changes at Hales is long overdue. I’m happy to see them adding new, and more modern beers to their lineup. I’ll always love the old faves, but it’s good their starting to keep up with changing tastes and styles.

And I love that they brought in El Camion as their old menu was just ok.

The old Zesto’s is going?

We should ride the train to Hales….. Rails to Hales Ales we can call it!

Congrats!. I moved to Seattle in 1986 and became a barmaid for a spell, These newfangled microbrews were all the rage and Hales was one of them . So happy to see you still in Frelard, still in business and being such a great part of the community. Cheers!

We’ve been going to Hale’s for many years. We think its beers are among the best in Seattle. Its hard to beat Supergoose for a well-balanced tasty beer. And its one of the most comfortable, attractive places to drink beer in Seattle. I can’t understand why people flock to those noisy, austere brewery tasting rooms when they can sit in comfort at a place like Hale’s.