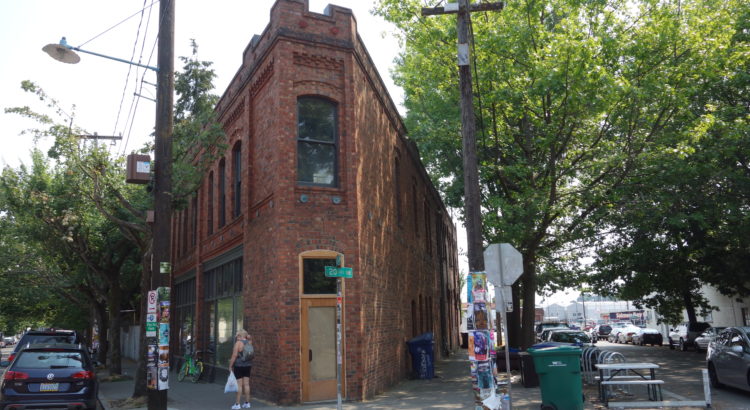 The historic triangle building on Ballard Ave, known as the Flatiron Building, has just been sold for $2.4 million. The previous owner was James Lathrop, who’d planned to open a restaurant/bar called Ballard Republic in the space. However, after waiting over a year and a half for city permitting, he had to forgo his plan and sell it off to pay back his original purchase.

“I was out of money and out of time,” Lathrop says. When he first bought the building in 2015, he wanted to open a second location of Cannabis City, a marijuana store just south of downtown Seattle. However, he then changed tack and decided to open Ballard Republic because he thought it would be more profitable. But he didn’t anticipate the waiting game for permitting.

“I basically didn’t have any choice. I had to sell it because I had to pay off the previous owners.” His deadline to begin building was July 1 – the sale was finalized on July 31.

“It’s another example of how hard it is do business in this city,” he says.

Lathrop said the new owners are going to pick up the permitting process where he left off to open a bar/restaurant. He says they plan to do a wizard-themed bar, aimed at appealing to the gaming crowd in Ballard.

We’ll check in with the new owners soon to find out when they plan to open their wizard bar.

A bar for wizards?!?!? I would have never guessed a pot shop would lose out to a wizard bar 15 years ago!

If you consider Mox a bar for wizards (which I do) then that part of Ballard is already pretty saturated.

Beer and wine does not a wizard bar make! Wizard needs liquor… badly.

* you can’t have i502 businesses (weed shop) in a historic district.

“after waiting over a year and a half for city permitting”

Your government at work. Maybe he should have pitched a tent on the sidewalk, that would have gotten City Hall involved overnight.

There should be some kind of betting pool for how many comments it takes before someone beats the homelessness dead horse.

I just casted a spell of protection. I’ll take that bet.

They tried to spend Jeff Bezos’s (not) hard earned money, but you guys came to his rescue. You rushed in to save Vulcan’s money, and Starbucks’s money.

YOU. You carried water for billionaires who would have had to pay for once, at no cost to yourself. Now you’re left with all the money coming out of your property taxes and your sales taxes.

And you sit here and whine and cry about your hard earned dollars. You did this to yourself. Every time anybody so much as talks about progressive taxation to lift the burden off the poor and middle class, the very guys who perpetually bitch and moan about themselves being taxed to much are the first ones to fight to protect the wealth of people so rich you’ve never seen the inside of one of their houses in your entire life.

Yet another reason why cranky old conservative men aren’t taken all that seriously. Except when Vulcan and Amazon are pulling your strings. Cucked is the word, isn’t it? Those billionaires are laughing and laughing at you little cucks.

Don’t flatter yourself, you’d have to have a wife worth it my friend.

Ellen, it isn’t a fair bet if you keep posting about homeless/addicts/billionaires yourself.

This is a post about a potential wizard bar.

18 months is a long time to wait for a permit. That being said, I love this building, I love booze…but I’m not sure about the wizarding concept. But, I’ll at least give it a try and see what they (whoever they are) do with the space.

There are many reasons why permitting can take awhile. My guess is they never really had the funding to begin with which can hold up a permit. That said, wizard? LOLOLOL I wonder who will move in when they close in 6 months.

I can see it now! A bunch of Harry Potters’ running around with beer, waving around magic wands and getting into Hogwart magical fights…

We can set up some lawn chairs with a cooler full of beer and make bets on who runs into the brick wall. :)

You had a perfectly good opportunity to use the word “butterbeer” and you let it fly on past.

i am just shocked we got down vote for this!! :)

Lots of wannabe wizards and Witches in Ballard , got a couple here in the comment section…..can you geuss who these psycho progressives are ? If you geuss right you win a “Starbucks gift card ” …..come on geuss my normal friends here in wonderful Ballard ….