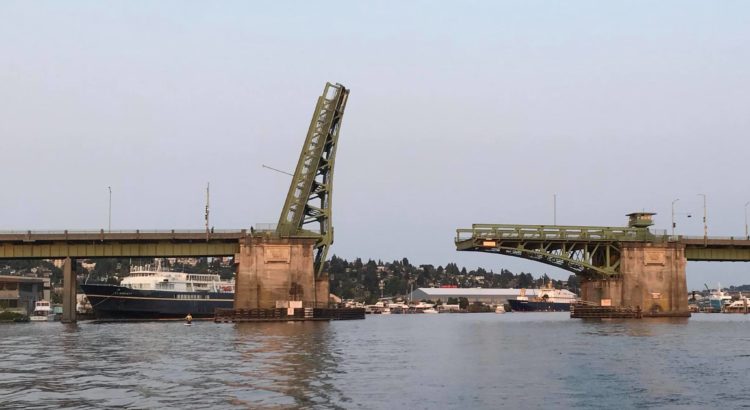 Our recent heat waves are having a surprising side effect: it’s causing the Ship Canal bridges to malfunction. The most recent headache was on Wednesday, when the Ballard Bridge was stuck open for over an hour. As it turns out, extreme heat can cause the steel components to swell and misalign, which can create issues for raising and lowering.

The Seattle Department of Transportation says crews will be watering the Ship Canal bridges twice daily to keep the components cool and fend off more issues.

This phenomenon isn’t just in Seattle; bridges in Chicago get stuck during summer heat waves. According to Popular Science, firefighters had to hose down the DuSable Bridge in Chicago after the steel surface rose to more than 100 degree Fahrenheit last month.

They can start by not allowing it to be opened from 3:30 to 7 PM on weekdays. :) I’m all for sailboats, but not at the expense of the afternoon commute. 15th is far too important as a thoroughfare.

You know the Coast Guard already gave the city a 4 pm to 6 pm rush hour window, right? They didn’t have to.

The problem is, traffic only ever gets worse. It’s just how cars are. People always drive as much as they can possibly stand. If you build twice as many roads, people will think of more reasons to drive somewhere, and take longer trips. If half the drivers switch to bikes or buses or whatever, the other half will take up the slack by driving an extra 10 miles to save $5 on bottled water.

So 4 to 6 pm isn’t enough. Now we need the bridge closed from 3:30 to 7. What do you think would happen if the Coast Guard enabled us with that little concession? Drivers would drive even more. Then we’d demand a rush hour from 2 to 8. Along with taking the 7 to 9 morning rush hour and making it 6 to 10 am. And then to 11. It never ends.

Elenchos you might be the most annoying person on the planet. Congrats

Yes, I do get the sense that you’re in an extremely fragile state these days. So much anger!

Hey! Would you like a little upvote? You guys love upvotes, am I right? Oooooh yes, you know it buddy. You’re all about those tasty upvotes! Here ya go!

Don’t spend it all in one place, little guy.

Well elenchos he/she certainly jumped on the band wagon quickly. I was so hoping that one post could go forward with he/she making comments.

And right behind he/she are the comments from others that soon become nothing of the actual post but what elenchos expect . That he/she can push your buttons. Come on people, stop responding negatively to his/her post and just say what concerns you. This is what I look forward to.

Pretty much. Every time I’m driving on the highway in the fast lane and I get stuck behind a Toyota Prius doing 56 miles an hour, all I can think is, ”must be Elenchos”.

Then when I pass them I see him sitting in the passenger seat being driven by his fat wife.

No kidding? I never think about you.

Sure you do, everytime you wake up, look in the mirror and call yourself a “public intellectual” and then offer to wax Mrs. Elenchos’s balls.

No chief Sealth is telling you get the fuck out Ballard is not a Scandinavian town nor hipster Paradise it is Suquamish and all the lands you occupy will be taken back.

So, not content sticking up for the homeless, now elenchos has to berate people for commenting on traffic patterns and their personal belief that maybe the Ballard Bridge should be closed to boat traffic longer hours. I can’t wait to be told to ‘stop socking, stop lying, your candidate didn’t win, get out of Seattle we don’t want you here.’

I normally agree with you and the fight against the ‘durrr homeless people durrrr’ sect here, but you’re off your rocker on this one.

By the way, when the bridge is stuck open for an hour, no one can get through, busses, carpools, bikers, pedestrians.

Well, write the coast guard a letter then. I’m sure they’ll get right on that.

Expand the rush hour, add lanes. Build freeways. LA tried it. Houston tried it. You can’t make traffic better. It always expands to fill however much volume you give it. Alternative transportation doesn’t fix car traffic jams; it just gives you an option not to be part of it.

Bikes can just cut over to the Locks, you know. Adds about 12 minutes to your ride.

I’ll give you this post. Only because you’re not being judgemental. Makes sense that no matter what time the bridge is up it will cause problems

This bridge doesn’t open just for leisure boats. Work boats use this waterway all the time to pass through. So imagine the families that have been waiting for their loved ones to dock after being gone for days/weeks/months or the guys that are working on tugboats to get cargo to other parts of the country.

If those fishermen are taking anybody whose family loves them out on those boats with them, well, that’s kidnapping. It’s an outrage

They are closed 4 to 6 on weekdays except for vessels over 1,000 gross tons.

Before things get too ugly, boats technically have the right of way in navigable waters. Federal law. Good that the feds have allowed two hour windows (morning rush too) to keep the peace. Seattle is doomed to more congestion no matter what unless Amazon packs up and leaves over the employee head tax.

One can hope. Actually I predict they close up over night in a few years and robber baron Bezos disappears with all the money leaving the soft boy coders to starve. Think dot.coms folks.

This heatwave is proof that the climate has joined the War on Cars.

get a job erica. a real one.

Erica? Is that what you think? Have you ever considered a non-harassment-based solution to the problem of people on the internet who disagree with you?

You didn’t move your wallet AND you still ARE mumbling.

OK I’ll give you points for that one.

The heat wave is proof that you blow hot air. Don’t you have anything to do?

I think you mean the war on carbon emissions cars. There are electric vehicles. Or do you hate those, too?

Electric cars are carbon emissions cars. They just displace the emissions from the tailpipe to some smokestack somewhere else. A coal plant or a natural gas plant. Or emissions from Elon Musk’s pie hole. The pollution from his twitter account alone is the cause of at least 0.1 ℃ average global warming.

Yeah, sure, if that’s the story you want to tell yourself, then go right ahead. But in reality, the PNW hydro plants are part of a North-South transmission corridor that runs down to California. The more hydro power your Seattle electric car consumes, the higher it drives the market price of kilowatts in that corridor. At a certain price point, it’s cheaper to buy power from a California gas-fired utilty than from a Washington hydro plant. So every kilowatt of hydro power you consumer, is one kilowatt of carbon-emitting gas fired power that California produces.

And of course, electric cars still clog the roads, and create as much congestion as drivers can stand. Cars — no matter the power source — don’t scale. People drive more and more until it’s almost, but not quite, unbearable. There’s never enough roads for car culture.

The “war on cars” is actually cars at war with themselves.

Get a job and do something. What are your plans for capital improvements in Ballard you fool. When will YOU be raising taxes? When will YOU run for office and leave us alone? Still waiting for you to move your GD wallet, so we can understand WTF your’ re saying.

Oh, come back to us elenchos!
We’ll *promise* to try to treat you nicer this time!

The heatwave is proof there is a God.

Perhaps the Seattle DOT can be a little proactive and spray water on the bridge after X# of days of ~90+ degree weather. Its just a thought but then some idiots would complain that we are wasting water and running it into the ship canal and eventually the ocean. Oh hey, didn’t tRump think of that already along with needing picture ID to go to the grocery store to buy groceries?

I didn’t know this before today, but apparently they do:

One more reason why a new combined vehicle/light rail high bridge should be built to replace the existing Ballard Bridge, which is over 100 years old.

Stuck open, fine with me. Keep Ballard secret and while I’m at it, keep Seattle secret. Go away everyone. Oh well, it’s too late now, the greedy developers have already ruined it. Ballard is unrecognizeable!!! Uff da!

According to that right wing rag, the Puget Sound Business Journal, the Seattle are is spending close to $1 BILLION a year on homelessness. Um, don’t they really mean drug addicts? Even just a bit of this, OUR MONEY, could build a very nice new modern bridge. One that doesn’t stop for cardigan wearing wine sipping yupsters on their yachts. One that doesn’t get stuck, ever. One that brings us into this millennium. One that actually addresses the growth here. One that allows commerce to be commerce at all times.This is no longer cute or just a glitch in our days. It, like many things around here, is a joke. It’s an 8-track player in a model-T. Groovy baby.

What is there to say? Almost every word he said is wrong. Sad.

You know what’s interesting about this thread is how most of the actual Ballard regulars are well aware of the rules for when the bridge goes up, and the swarm of sock puppets who hijack all the threads have all these incorrect ideas about how it works. Like theyre pretending they live in Ballard but have actually never been here.