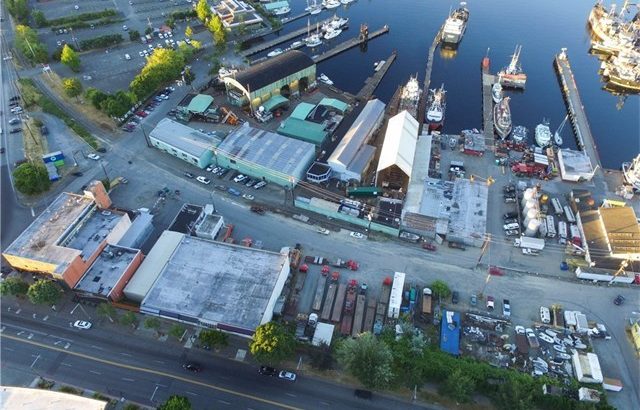 Plans to construct an apartment building on the west end of NW Market St are inching forward, with a new land use application submitted with updates to the original plan, including adding an additional story.

The parcel at 2417 NW Market St was sold to San Francisco-based Carmel Brothers earlier this year for $11.75 million. The building is home to recently relocated Twice Sold Tales, Ballard Transfer Company, Healthy Nails salon and Lundgren Enterprises. The seven-story apartment building will have 171 units with ground-level retails, and parking for 100 vehicles.

John Watkins, owner of Twice Sold Tales tells My Ballard that he’s been given until March 31 to move. “I’m still trying to formulate a plan. I’m open to suggestions. I have definitely not found a place yet,” Watkins said. “I’m hoping to find a space in a building in Ballard that’s not going to be torn down.”

Healthy Nails tells us they’ll also be moving next year, but that they plan to find another location on Market St. Janice from Ballard Transfer Company tells My Ballard that the store will be going out of business because, “No one wants to run it. Everyone who works here is at retirement age anyway,” she said.

Craig Lundgren, owner of Lundgren Enterprises, says he doesn’t know exactly when he’ll be moving. He’s been in his current location for two decades. “We’ve been in Ballard for 25 years total – we started on Ballard Ave,” Lundgren tells us. “We have looked at several possible locations in Ballad. We hope to stay here – this has been home.”

No update yet on when construction will start, but we’ll keep you updated.

Uh, good? We have an acute housing shortage, not an acute nail salon shortage.

I’m happy to see this property fully developed. This building will not only produce quality, high-paying jobs in leasing and maintenance and custodial jobs but retail street level jobs as well. The money from construction permits and jobs and building materials and increased property taxes and utility taxes and host of other taxes will be financial win-win for the city and all of us Ballardites.

Can you explain how the money from 1000+ other developments has benefited the residents of the city, of Ballard? Lower taxes because there is so much money floating around? More outreach to the homeless by way of guidance as well as housing? Or just more $12,000,000 per mile bike lanes? Anything specific?

So which developer construction company do you work for? Are you getting paid to post things like that?

Hurrah, if they get it done quickly, this white elephant will be finished just in time for the crash!

Why not a photo of the actual site? This is illustrative of nothing.

Um…That IS a photograph of the actual site.

How about a brewery & used bookstore collaboration?

Earl yeah like there isn’t enough drunks and Ballard already…

This is happening in Portland and NYC

Nothing to be surprised about and will more more crowded for getting off work…..but way I see it and it will happen the Cascadia subdeduction zone west of us will slip and in 15 min,s Ballard and rest of lower Seattle be under water from a tusami ……just a matter of when and that alot of dead people in such a crowded area. Keep coming here and pile on top of each other !!!!

Guest
Mayhem in our streets

Because spelling is more important than the obvious point being conveyed. You knob.

The obvious point being that he’s a nut? I think that’s implied from his failed attempt at grammar/spelling.

Such a classist. Those who are poorly educated are crazy?

This Balls is a real intellectual. Posting the same damn thing…WRONG damn thing…three times. I love your response john.

Seven stories is one story too many, but it’s good to develop the property fully. Too bad the Nordic Museum didn’t add a few stories of housing. Too bad both properties were developed with a bike path behind them instead of on the street side.

Behind? The Burke Gilman is being constructed right on the south side of Market. Will be passing right in front of this new development as well as the Nordic Museum.

Too bad the Nordic Heritage Museum presents a blank wall onto Market Street with no human scale.

It really is the worst building to go up in Ballard in generations.
I have no doubt this new apartment building will be more attractive and actually respond to the streetscape

The worst building? Have you seen the monstrosity that is the new Western Fire & Safety building just across the street from Nordic? It’s made out of tinted cinder blocks and has multiple garish neon signs. An absolute eyesore. At least the Nordic is architecturally interesting.

agreed
I dig the nordics look in comparison to fire shop. what I don’t get is why they moved 2 doors away?? the construction noise has been nightmare.. (to be expected) not looking forward to said neon glow at night. I’ve definitely noticed WAY more junkies in alley since this has gone up.. always pleasant to wake up to someone crying & screaming on a repetitive 5 hr loop at 3am. I’m just hoping I can get an apt in this new building where the book cat lives.. I want my water view back!!

This is awesome… as a Sunset Hill resident I’m happy to see more development west of 24th. That stretch of Market really could use more vibrancy.

This is an example of why routing the Burke Gilman trail along the south side of Market Street is such a bad idea. The much better alternative is to route the trail on the 54th public right of way, south of and behind this building and behind the new museum. With the current trail plan all the residents of the 171 apartments and retail space will have to cross the trail either along Market St., or if they enter and exit the back will need to cross the trail at Shilshole and 54th. If the trail were located along 54th, none of these crossings would be necessary. Routing the trail along 54th is a much better option now and in the future when this area is further developed.

Yeah, sounds like a fantastic idea!! I’m sure families would love riding their bikes next to semi trucks and other industrial vehicles. I love how people like you don’t think about the families that make there living from these businesses.

You mean like the existing Burke-Gilman trail between Fremont and Ballard? Those businesses seem to be doing fine and families have been cycling that stretch for years.

54th is not going to happen. The route is settled. As a bike user, I’m excited about Market, because I get to experience the vibrancy of that retail strip and pop in out of whatever shops are opening up in the new development more easily.

Nick – Now that Ballard Transfer is going away, it is one more reason to put the BGT on 54th as it should be.

Eddie – I totally agree and now that Ballard Transfer is closing up shop it is one less voice against using 54th for the BGT. 54th is the ideal route for the BGT!

This will block views and cut off Market from a view of the waterfront…..

You don’t own your view.

tru.. but sux when one pays for view only to have it obstructed 2 months later

still a bummer to trade a water view to some freaks shit in your driveway, lol

Why would one “pay for a view” knowing that you can’t own a view? Doesn’t get more entitled and self-deluded than that.

Let’s sell the Ballard park across from the library and build apartments there. At least the city can make money off that sale and as an added benefit, the heroin and meth-heads will have to leave.