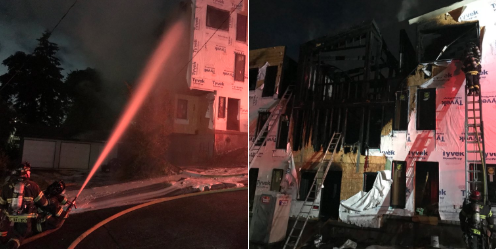 A fire early this morning damaged a townhouse being built on the 4200 block of Winslow Ave N in  Fremont. Investigators are looking into the cause of the fire.

Firefighters responded to the blaze at 5:30am, and had the fire mostly extinguished by 6:40am. According to Seattle Fire, the middle townhome in the three-unit structure was the most damaged; firefighters were able to keep most of the damage contained in the center unit, due to the structures firewalls.

Crews quickly knocked down the fire at the 4200 Blk. of Winslow Pl. N. Firefighters continue to work on putting out hot spots, to ensure the fire does not reignite. Fire investigators on scene, no reported injuries. pic.twitter.com/0l6pT4XMbT

Seattle Fire tweeted that there were no reported injuries in the fire.

Drove right by this on my way to work this morning. 4 or 5 firetrucks plus a fire chief, and another passed me on the way to the blaze as well. Glad these were unoccupied units.

I saw it too when I was walking by this morning. Stop and talked to the firefighters and they said some squatters had set up a grill inside and it had tipped over.

Are you being serious about that?

Clearly not, squatting in new construction that workers show up to all day every day makes no sense. Do you guys just believe everything you read on the internet?

I was just curious as it sounds like you had talked to the firefighters. My bad not catching the sarcasm.

Jeez, really creepy Dave. Do you always mess with people on the Internet telling lies and then ridicule them and laugh about it because they trusted you?

Look who fell for it.

Same rubes who think Dori Monson is journalist, and buy tickets for Milo Yiannopoulos. They swallow bullshit every day, and spit it right back up with a straight face, if it happens to further their agenda.

Yeah but I’m none of those. I just happened to drive by the fire on my way to work and was curious if there was any more information. This is why spreading fake news is bad. Plus, it triggers elenchos.

Everything triggers elenchos. Dude’s got more triggers than a Smith & Wesson factory.

“Triggered” is one of those alt-right words like “virtue signal” that you saw a lot over at stormfront and 4chan, and you wanted to take it for a spin. Apparently you think “triggered” means “whenever someone says something I don’t want them to say”. “Virtue signaling” is “things I don’t want people to say”. Incorrect, in case you need to be told.

Probably best to stick with the English they taught you back in 1962. The lingo of youth of today is not working for you, socky mcsockmaster.

Judging by the thousands of words he litters on this blog, setting him off is one of my favorite pastimes.

Oh great, more Mike O’Brien tweakers trespassing and destroying private property. Sort of makes you want to give him a big ol’ hug for all he does to keep Fremont safe and drug free.

I was going to ask if you had a source for that, then I saw who was posting and decided to write a snarky response instead!

How could squatters be living here? The place was under construction. It was fenced off and people were working on this project everyday.

Did anyone say squatters were “living there?” That does not mean squatters would not jump or cut a fence, break down a temporary plywood panel substituting for a door to get out of last night’s rain, and maybe do a little BBQ ing on the side. Happens all the time. They usually clear out before work starts in the AM. By the way, some projects stop for as long as a week until the next scheduled trade workmen come in. Happens more often now that labor is in short supply.

So embarrassing for you. You suckers will believe anything. Just admit you got trolled and move on. It’s not like you have some towering reputation to protect.

The construction company came on KIRO and explained it was the drug squatters who are there everyday and the police refused to move them. Sounds like a lawsuit to me. And thanks to all you loser enablers for his kind of chaos.

So how did they work with “drug squatters” living in their lap every day? Can you build with people camped out and barbecuing in the middle of your building? I remember back in the day building houses, sometimes you’d hang around your site and crack open a cold one. Fire up the barbie even. Totally plausible that the workers themselves got lit after quitting time one day, and tipped over their own barbecue. Scapegoat some phantom “drug squatters” and credulous TV news will broadcast it.

I wonder if the insurance company will fall for it. They don’t like games.

Anyhoo, PLEASE sue the city and the SPD! Let’s go to court!

Nice. Risk of death and injury to neighbors and firefighters, as well as the massive cost of the response and the rebuild. Thanks enabler idiots!

No smoking.
Well, unless you burn down a condo with your hobo fire. Then we need to send out a “navigation team” to help you find new ways to leech off the govt teat.

Too bad the junkie hobos didn’t burn up as well.

Don’t tell Elenchos. She’ll tell you that the contractor is lying and that her junkie pets are harmless. It couldn’t possibly be the case that you’d have have druggies squatting in there and leaving needles and crapping all over the place.

If you’re reading this thread and you’re unsure of whom to believe between Elenchos and those of us who disagree with her, here’s the interview with the contractor who project was destroyed by junkies. And remember, when CM Mike O’Brien tells you “if property crime or violence is being committed to just call 911,” keep in mind that the cops didn’t do jack shit about it. So have a listen, and decide for yourselves who is more credible, Elenchos, or the contractor.
PS: Trigger warning for Elenchos, it’s Dori doing the interview.

The podcast starts at 19:25, and lasts for about ten minutes.

Dori Monson. That says it all, doesn’t it?

I hope they sue. If you guys could actually prove any of this, you’d really have the smoking gun, would’t you? Police stand by and do nothing, wow, that would make a splash, if only it could be proven. It’s too bad people like Dori Monson can spew any garbage they want and never get held accountable. It takes years, and Alex Jones-level of malevolence, before right wing talk radio liars ever face any consequences.

But sockpuppeteer is right. If you’re the kind of person who trusts alt-right yellers like Dori Monson, then sure, believe it was “vagrants” and “drug squatters”. No doubt you already believe worse. But the construction co’s insurance company isn’t going to go for the charade. There’s a lot of money at stake and the truth will have come out.

Hey, we can all agree we hope they sue the city, right? Unity!

Im guessing you didnt even listen to the interview, because your mind’s already made up. It wasn’t Dori spewing what you cavalierly dismiss as “garbage,” it was the contractor telling his story. But OK, you believe it’s more likely he’s lying for nefarious reasons, rather than acknowledge that junkies might have been squatting in there. Which, btw, is what happened to the house that burned down the other day by Fremont Brewing, nearly catching the business on fire.

“Might”? Oh, sure, anyone might have done it. You sounded like your mind is made up. Now you walk it back to it “might” have been junkies. Why does every miscreant have to be a “junkie”, anyway? Did the construction workers do a urinalysis? They’re guessing, at best.

The story doesn’t add up. Ongoing trespassing. Barbecues brought on premises? Did the company leave the barbecue there? Or get rid of it every day, and the “junkies” brought in a new one each time? When the cops announced they would do nothing, because reasons, what then? Just shrug. Oh well. Cops won’t help so I guess there’s nothing we can do.

The story makes it sound like they *knew* disaster was going to happen, what wit the site constantly invaded. barbecues every night. Knowing that, they didn’t upgrade their fences? Hire security? Nope. Just took their chances.

Maybe. But it’s not a plausible story. Scapegoating trespassers is an obvious way to dodge the blame for the construction workers themselves getting a little too rowdy or forgetting to put out their fire in their after work beer blitz.

It *might* have been “junkies”. Sure. Maybe. But the story stinks.

Man, you are seriously fucking dense. I guess you missed the part about needles being found everywhere on the site? And where are you getting this story about a barbeque? He never mentioned that.

And you think hes lying because of some cover up while saying he called the police multiple times? It’s very easy to follow up and verify that, just like it is to verify his call with the fire chief. You think the workers wanna touch the junkies’ shit and risk getting pricked by their filthy needles? Thats not their job.

And security? At $24K month? You’re a freaking loon Elenchos. Get back on your meds.

Insurance investigator: Why didn’t you hire security?
Construction company: $24k a month!?
Insurance: I see. Here’s a bill for $400,000.

And needles only prove that they had inadequate fencing. Was the SPD supposed to post an officer there 24-7? They could come and arrest one guy trespassing, and even take him away. With crappy fencing, then another one would come along tomorrow. Although I generally think that if a crew of guys knows how to build a condo they also know how to build a fence. The fence being a lot easier.

The story stinks. Maybe it’s true. But it stinks.

Dennis, you’re acting out. This is a disturbing tableau.

I wanna be a soyboy, and you can be my non-denominational gender-neutral traveling companion. I used to love that song back in the day!

I didn’t listen to Dori much at all…in fact, I fast forwarded to the guy in question. Dori’s diversions into ecoterrorism, etc., were stupid. But that guy’s story! I need someone to tell me that if I own property and someone keeps coming onto it and creating mayhem, the police will boot their asses off it. Because if that’s not the case? We’re going to get to a “Stand Your Ground” shitshow sooner than any of us would ever want. A chilling story.

And I’d gladly contribute to their legal defense.

Ah, just checking in to see our suspicions were true. Eat it, elenchos. Better yet, go BBQ with your scummy addict pals and complain about the “Altrighters in Ballard”!