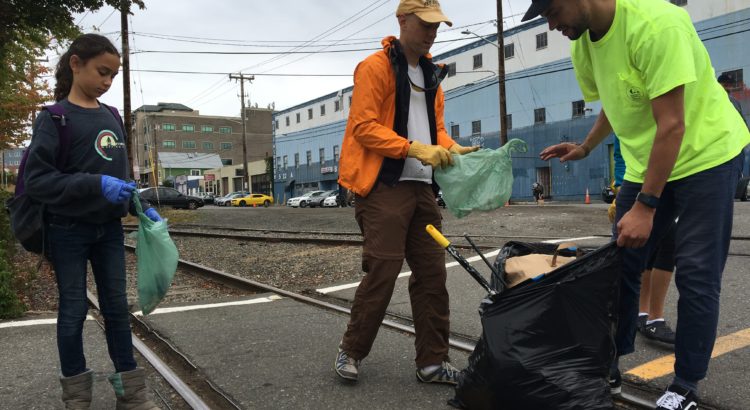 A group of volunteers picked up 154 pounds of trash from downtown Ballard last weekend, as part of a West Coast cleanup tour initiated by two brothers from Kingston, Washington.

Nick and Hans Schippers, in partnership with Sustainable Coastlines Hawaii, led the two-hour cleanup  last weekend starting from Patagonia on Ballard Ave. Just over a dozen volunteers armed with plastic gloves and garbage bags joined in, making their way west on NW Market St, left past the Nordic Museum, and then down the train tracks to Shilshole. The cleanup party then made their way north on 22nd Ave NW, left on Ballard Ave, and back up to the Patagonia store. The Schippers brothers arranged the cleanup as part of their nine-month West Coast tour, aiming to educate at least 10,000 students about plastic pollution in the ocean. They’ll stage cleanups along the way, and keep track of their progress.

The Ballard cleanup was the kickoff for the tour, which will hit all the major coastal towns from Washington to California.

The brothers have also set up a GoFundMe campaign, raising money to help them on their journey south; click here to donate.

Thanks junkie hobos! Thanks O’Brien!
Way to “conserve the natural beauty of the PacNW”. Comedy
Don’t forget to recycle.

This is an article on people doing their part to better their neighborhood.
Your comment is complaining about homeless people and reiterating how you’ve done nothing to better your neighborhood.

Yep, ignoring the source of the problem. Classic snide Seattle liberals.
You don’t know what I do for the neighborhood.

I am just an irrelevant elephant. I know nothing of sources or problems or snide liberals.
All I do is graze all day, eating grasses, small plants, bushes, fruit, twigs, tree bark, and roots.

🐘 Oh, and point out irrelevancies. 🐘

Your snark is ridiculous, and the two are not mutually exclusive. This cleanup is helpful even if it doesn’t get at the root cause.

we know exactly what you do for the neighborhood. These posts are the most productive part of your day. you don’t even do chores.

As do you, asdf/Hobo neighbor

So, these are white dudes from Kingston? Jamaica? Isn’t that cultural appropriation or something? Regardless, at least they seem to care about cleaning up after themselves…and others!

There’s a Kingston, WA. But yeah smart people would assume these white people are from Jamaica.

Those guys are tossing up some serious hang loose signs. That to me denotes laid back, mellow, island dudes. So yah mon, Kingston, Jamaica!

Uh there are other islands.

one of the guys linkedin pages shows he worked and went to college in Hawaii. and says he is from Seattle.

I love proving people wrong. But that was too easy.

Did they edit the article? It says they are from Kingston, WA in the first sentence.

They must have. I know they weren’t from Jamaica, but when am I gonna be able to use Kingston Jamaica on a blog about Ballard Washington ever again?

oh I am sure you’ll have plenty more chances with your penchant for making wild assumptions without bothering to do even the slightest bit of research.

Like, “all these junkies are coming here from Kingston – Jamaica! They’re not even from the US!”
Something like that?

but also add you conflating a rumor of a crime into a fact that Ballard crime will basically be forever increasing into a war zone pitting you and other hard working paranoid old white guys that make minimum wage against liberal Caucasians and brown people whose illegal guns are being supplied by Mike Obrien and the city council using all your ever increasing tax payer funds. Also someone threw a paper towel in your garden refuse bin sending you into a rage.

Oh you’re right! I swear I saw some hobo not sort his trash before dumping it in the street! The Old N White Brigade was very offended. Plus, my parking spot on Canal Street is now a broken down RV.

Your parking spot. It’s yours isn’t it? Have them towed. Problem solved.

Lacks zest. Also, i thought u libtards were all about ending “classism” and forcing biz to pay higher min wage. Fun fact: nonwhite conservatives exist, and their numbers are increasing as the liberals reveal their hatred for the working class.
You guys should go back to what you do best: sucking up to China and turning nice cities in sh*tholes.

Your “hang loose sign” is a shaka, which originated in Hawaii. It’s widely used in Hawaii and is not specific to surf culture.

It has nothing to do with Jamaica.

i appreciate the effort, thanks…!

hope nobodies crapped on old blanket was mercilessly thrown away as garbage.

154 lbs of trash removed from Ballard…

Wait, about how much does O’Brien weigh?

People went out, on their own time, and cleaned up their neighborhood.

Not only did you do nothing, Harley, but you proceed to come onto a neighborhood blog and complain about it. We’ll remember that, the next time you disrupt an town hall by throwing a temper tantrum. You really don’t care about Ballard, do you?

Ballard was great, then you guys enabled the junkie invasion. I’m not Harley, and you never speak the “Truth” so we have that in common, I guess. Save it for those sex offender enablers at the Stranger.

Awesome idea. I support their GoFundMe and let’s hope that we’ll have 10,000 young people who keep plastics out of the sea.

i personallyw uld be willig to see every eligitator go too but alligators to my understanding are smaller and tent to have it.

i can’t tell what you are trying to say. Maybe change your name to Drug User?

Thanks for cleaning me up!

You obviously hate Ballard and have no compassion for our vulnerable ax wielding community members. Just ask Elenchos/Truth

Don’t you see, Greg? YOU’RE THE PROBLEM
Time for some tax increases and safe injection sites. Prepare for some insulting responses from the local crime apologists and sex offender enablers. Make sure to keep your firearm in a safe otherwise the Pink Mafia will fine you $10k when it’s stolen by tweakers. Oh, you need it to defend your home you say? JUST CALL 911

Jerkin’ Jenny Durkan says Seattle is safe! How can Greg claim otherwise? That goes against the party line!

So what we have here is two rich boys who want us to fund their travel. Get jobs boys.