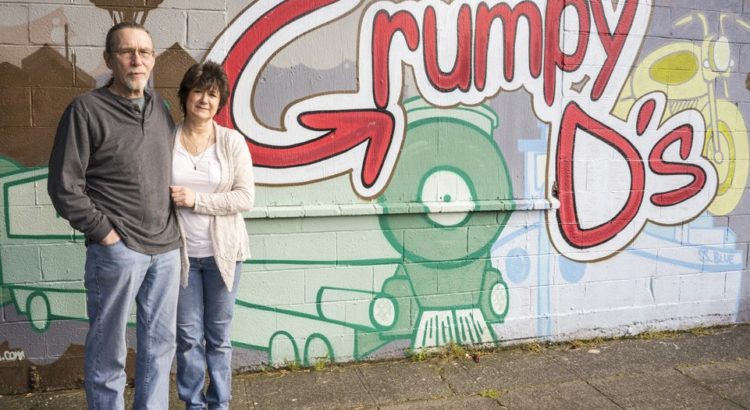 Last month, we reported that Grumpy D’s is moving to make way for the development of a five-story, mixed-use apartment building. Now, Dan Kurtz of Grumpy D’s tells My Ballard that instead of moving, he’s planning to sell.

“We’re going to pull the plug. We don’t want to start all over with a new fan base, music, rent, setting up a whole new venue,” Kurtz says. “I’d like to sell it for a nominal fee. It has great equipment, a great name, a good core of regulars.”

Vivia, the company that’s developing the five-story, 167-unit building named Nesttun, is locally owned by three women and is based in Interbay. Morgan Royse from Vivia tells My Ballard that they had hoped to retain Grumpy D’s in the new building; the ground floor will have a 1,500 square-foot commercial space in the same location where Grumpy’s currently stands. However, the 18 to 24-month construction process is too long for Grumpy’s to wait. “We had a lot of discussions about how to keep them there,” Royse tells My Ballard. “It was our goal, and continues to be our goal, to retain them.”

Nesttun will take up five lots on the corner of NW 70th St and 15th Ave NW. Three of the five businesses are landowners who decided to sell to Vivia — Creation Dentistry, Husky Home Care, and a studio. Grumpy D’s and a daycare are the only businesses who rent their properties, and the daycare has chosen to end their lease early. Grumpy D’s current lease goes through January 2020.

“We didn’t buy any of these properties under distress or on foreclosure. They’re all landowners who made financial, calculated decisions to sell their parcels on 15th in order to secure their own financial futures,” Royse says.

Nesttun will have 68 small efficiency dwelling units, 83 apartment units, and 12 live/work spaces, which will be targeted toward small-business owners.

Royse says that the 60-plus small efficiency units in Nesttun, while not deemed “affordable housing”, will still aim to be affordable to one or two people with a combined salary of $45,000. “We’re doing that so servers, bartenders, people that want to live in Ballard, young professionals, will have the ability to do so.” They’ll also have 40-plus two-bedroom units, which Royse says could work well for families who can’t afford to buy a house in the neighborhood.

Nesttun, named after a town in Norway where one of the developer’s father-in-law is from, will be built with a Scandinavian design. They haven’t released their design sketches yet, but Royse says it will be built with high-end materials, and will accommodate people with dogs, kids, and elderly couples.

“With input from the community, we hope we can build something that the neighbors will find aesthetically pleasing,” Royse says. “You can’t please the masses, but we’re certainly going to try.”

Construction for Nesttun is planned for the spring of 2020. No word yet on when Grumpy D’s will close — we’ll update when we know more.

Another unique business gone because of greed. Why mention the developers being female? Who cares? A developer is a developer taking away the local flavor. Is there parking in this building? Makes me sick. There is already a glut of apartments. And why no truly affordable units? That’s not right.

Who’s greed exactly? The owners of the buildings sold for big bucks. Good for them.

I happen to think it’s great that Vivia is owned by women. Go ladies!

we really need to stop blaming developers… it’s the landowners who make the decision to sell. just like the cute single family homeowners that choose to sell out and, hence, ruin the neighborhood. are these folks actually FORCED to sell to developers?

The owners of the land are greedy to sell at a profit to themselves? In what universe does that make sense? What if this is their retirement?

while I agree, the same could really be said about the humans working as developers. they are trying to feed their family, and this is their way of doing so. Our city policies – created by those ‘we’ voted in — built the framework for these transactions and, as a community, we are being so ridiculously judgment of who takes action. It’s almost laughable. tsk tsk tsk

What is unique about a coffee shop in Seattle?

Also a (free) music venue. Not many of those neighborhood places still around. We will miss seeing our friends create great music there.

The population is increasing, which means that there are two options. Either create more housing or watch the cost of housing continue to skyrocket.

If you’re a rational person and decide that we should create more housing then there are limited ways to do that. It’s either increase density in the existing developed areas or start cutting down more trees in Issaquah, Enumclaw, snoqualmie, or wherever and watch our environment deteriorate while traffic get worse and commute times increase.

I’m not sure what’s so horrible about building an apartment building on 15th. As for Grumpy D’s, I’m sure the owners are fine people, but businesses come and go all the time. If they wanted to prevent something like this then they should have locked in a better lease or started in a different location. Businesses take calculated risks all the time. Sometimes they work out, sometimes they don’t.

Man are you right. Playing the gender card only works on certain occasions, such as joining the supreme court, or when running for office. 1 thing for sure is the only folks left here will be wealthy teachers and Amazon employees.

Wealthy teachers? There’s not any in the U.S.A.

Have you seen what senior tenured profs and department heads make at UW and every other college around the country? I know you mean public school teachers K-12 but there’s money in them thar academic hills if you are at the right altitude.

There’s a big difference between a “teacher” and a “professor”. Thus, the two different words for the two different professions. The professors that I’ve known — at least in the hard sciences at large research universities — spend the vast majority of their time on research and grants. The teaching aspect of the job is largely an afterthought.

A kindergarten teacher is a long way from academia.

Guest
The Barber of Seville

One of 60+ small efficiency units sounds like a great place for dogs, kids and elderly couples. LOL

Did you read the entire article? There will also two bedroom units.

Sarcasm tends to work better if you don’t Trump up the actual facts.

I did some math on this. If you make 45K a year, let’s assume 18% taxes – that’s 8100 dollars off the top (you might get some of this back when you file the following year.) So, if half of your salary goes to rent, that’s half of what’s left of the 45k – 36900. Halve that to get 18450. Divide that by 12 to get a rent of 1537 per month.
In Seattle, in Ballard, in a new building? That’s cheap rent…in comparison.
The question is, how big will the units be? And will the ground floor tenants generate any income from the people leasing the apartments? Will there be parking for anyone wanting to use the ground-floor tenant-businesses?

At this point, paying $1500+ for a studio in a deteriorating/sterilizing neighborhood is its own IQ test. High speed rail to Tacoma can’t happen fast enough. No point in paying 40% more just for the “privilege” of watching social justice idiots make out with their dogs at some “gastropub” and then get harassed by some junkies on the way home.
At least NYC has culture. What we got? Intersectional Olympics?

Where can I get tickets for the Intersectional Olympics?

No place to move? There are dozens of empty commercial spaces for rent all over Ballard.