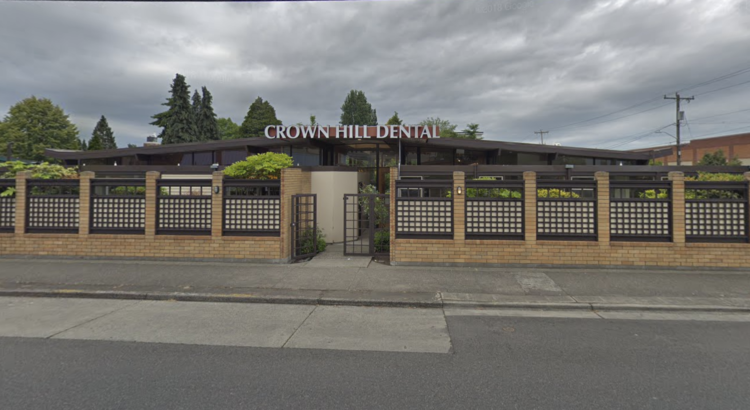 Police have arrested a burglary suspect and are searching for the second after a break-in at Seattle Crown Hill Dental (1421 NW 85th St) on Sunday night.

According to the SPD Blotter, the burglary happened at 9pm on Oct. 14. The owner of the dentistry received an alarm notification from her office, and alerted police.

“When police arrived they found the rear door had been broken and could hear a person inside. The suspect exited the building and began to walk away, ignoring the officer’s orders to stop. The 22-year-old male suspect then attempted to run but was captured a block away,” according to police.

The man had stolen documents, cameras, and narcotics from the office. A surveillance camera showed a second burglar in the building who had left the scene — police describe him as a while male, 5 feet 10 inches tall, and 170 pounds wearing a blue hat and a dark blue coat.

If you have any information about the burglary, call the non-emergency line at (206) 625-5011 and request to speak with an officer.

Did they check the nearby parks or RVs for the suspect? Might require some real heavy detective work and lots of overtime; just be sure not to be to rough during arrest or “Gorgeous Dre” Taylor or some ACLU junkyard dog lawyer will sue taxpayers for a fortune.

Remember kids, be sure to floss your teeth but don’t worry about the scumf*ck criminals camping everywhere.

I love how you were able to glean all that information from a summary on a neighborhood blog.

Clearly the SPD needs to hire you as their top detective! Although you’d have to quit your daytime job of rapid fire blog commenting under your multitudes of personalities…

Well, they’ve packed your kind into every office and we can see the results.

Another one of MOB’s “vulnerable community members” strikes again.

Getting the law enforced around here is like pulling teeth!
*ba dum ching*
Thanks, I’ll be here all week – just like the lowlife scumf*ck criminals!
*ba dum ching*
Ok I’ll just let myself out. TOO BAD THE HOBO WON’T LEAVE TOO
*ba dum ching*
Q: Hey, what’s black and white and red all over?
A: The City Council’s faces after reading Trump’s tweets!
*ba dum ching*

I wonder if he’s already out of jail and if not how soon?

why is he your dealer?

so they let the meth holding thief they caught go free according to other sites….great. why bother looking for the other loser?

Maybe they were simply people experiencing a lack of tooth brushes?

This is the last toothpick! A crime like this impacts the most vulnerable part of my image! And when my smile is the only thing I’ve got working for me, I know how important a big smile is. Fluoridarity!

Side question: anyone know who the architect of this building was? I’ve always thought it looked really cool.

I designed the Brick Fence while sitting in Dr. Courrier’s chair and ended up building it around 1978. Don’t know the Architect of the building but I believe it was built in the 60’s.

It’s quite troubling that more area residents aren’t keeping track of this local tragedy, the repercussions, the people allowing it to continue, as they do their phones or their dogs. Where is the same outrage they had for recent hearings? Appears to me as if their emotions are controlled by certain whistles/claims, while other urgent things go on right under their noses. Maybe if late night comics brought this up many would know what’s happening? Maybe if NPR or MSLSD did………………..

The image of ‘people doing their phones or their dogs’…made me laugh.

Seattle has a lethal case of conformity. Nobody wants to be labelled a “Trumper/Nimby/Altright/Bigot” so they whistle past the graveyard full of thieving junkies.
They do seem to care only about their dogs and phones, which is ironic since they bash the Bible Belt for their religious escapism.

You mean people are reluctant to show their racist tendencies. Don’t fret as some do.

are you off your meds?

i can tell you are a Trump supporter. Your English usage is full of errors.

Are you calling Homeless People errors?

We got robbed by this guy in September, and then he stole our packages and our neighbors packages in December. They set him free, and it seems like he went right back at it. If I catch him in my home he’s getting a blade injected somewhere in his body. I do not have time for that shit.