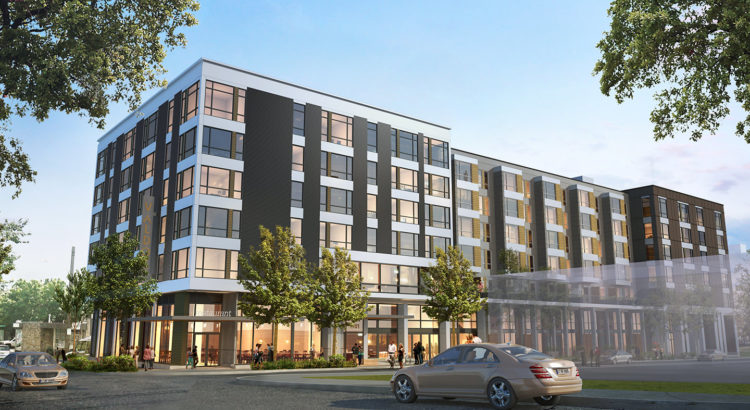 One of Ballard’s largest apartment developments, Valdok, has begun leasing their luxury apartments that span both sides of NW 56th St at 17th Ave NW. They’re also some of the city’s most high-tech apartments, with the top-floor units of each building geared with voice-activated controls through Amazon’s Alexa device.

Valdok, owned by LMC, consists of two 7-story buildings — the first phase of the development was Valdok I, a building with 178 apartment homes. The second, Valdok II, will add 164 units on the north side of 56th. The units are a combination of studio, 1-, and 2-bedroom apartments ranging from 485 to 1,206 square feet. According to their website, a 580 sq. ft. one-bedroom, one-bathroom apartment rents for $1,505. 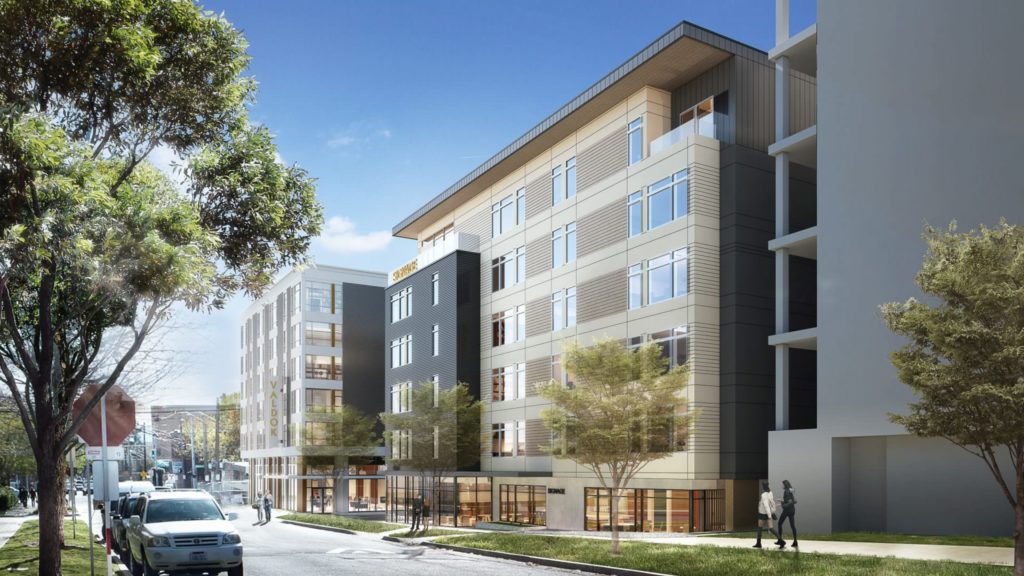 The seventh-floor, higher-end apartments with smart-home features are pricier: a one-bed, one-bath, 743 sq. ft. smart-apartment rents for $2,525. Some of the technologies they use include remote-controlled lights., an Amazon Echo built into home speakers, and special roller shades, which can be controlled through a smartphone.

The apartment buildings will each have clubhouses with full kitchens and gaming areas, co-working spaces, a 24-hour fitness center, and a “pet park” with dog wash and grooming stations. The apartments also have rooftop decks with fireplaces, barbecue grills, and outdoor lounging areas.

The name Valdok has both Scandinavian and local roots: one of the homes on the Valdok site was owned by the family of Bjorn Leo Valdok, who immigrated from Norway in 1959.

LMC owns three other apartment buildings in the area, including Twenty20 Mad, Axle and The Bower in Kirkland. The second phase of Valdok, currently under construction, is on pace to open in 2019.

“The name Valdok has both Scandinavian and local roots: one of the homes on the Valdok site was owned by the family of Bjorn Leo Valdok, who immigrated from Norway in 1959.”

Guest
Valdok in a Box

I bet they knocked a house down once, in Oslo, to build more housing.

Somebody needs to scrape up a whole bunch of leaking, reeking RVs and put up some parking lots!

Hey look.
I’ve been promoted to ‘member’!
Maybe now I can find out what happened to elenchos.

I bet it was homeless people.

This is great! Hopefully our new neighbors will support local businesses and help benefit the surrounding community.

Hey remember back when people had interesting hobbies besides dog babies and yoga?

Yeah. Ballard was awesome back in the old days.

The whoring still happens. Apparently you’ve never been to a yoga class.

oh man, how sweet would it be to live so close to one of the scummiest bum parks in the city??!!

My favorite bum sign in that area said “anything helps. Goal today = 25$”

That looks really nice, definitely above average for new apartment buildings in Seattle. Much better presence in the neighborhood than whatever dumpy useless buildings and parking lots used to be there.