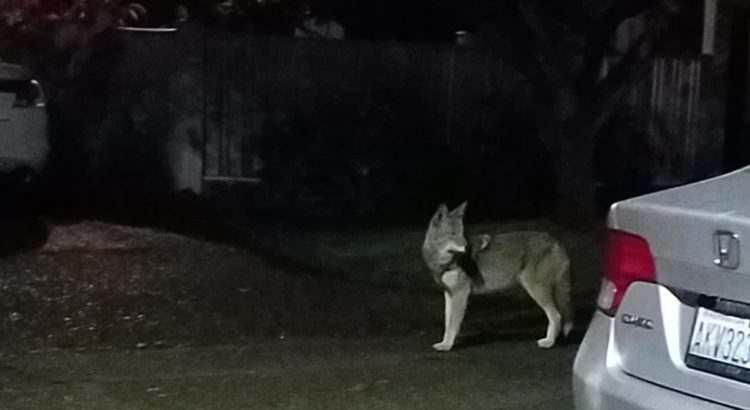 While it’s not uncommon to see coyotes in Ballard, it is less common to be followed by one, much less two.

Early this morning, Ballard resident Arne Snevoll was out walking his two small dogs on NW 68th St between 28th and 30th Ave NW when he was surrounded by two coyotes. “One coyote was striding plainly out in front of me, while the second was following 10 to 15 feet behind me, keeping mostly out of sight behind parked cars,” Snevoll told My Ballard in an email. “When I tried to shoo the one in front of me away, the coyote behind would come up closer to my dogs. I’m sure my dogs seemed like tasty snacks to them,” he wrote.

“The coyotes were not very fearful,” Snevoll added.

There have been a number of recent reports in the My Ballard Group of pets missing and being killed by coyotes — one member reported that his cat, Sugar, was unfortunately lost to a coyote attack. The Washington Department of Fish and Wildlife (WDFW) recommend dogs and cats should be kept inside, especially from dusk to dawn.

“If left outside at night in an unprotected area, cats and small to mid-size dogs may be killed by coyotes. Pets can be easy prey for coyotes,” the WDFW say on their Living with Wildlife website. “Being raised by humans leaves them unsuspecting once they leave the safety of your home. If you suspect losing a dog or cat to a coyote, notify your neighbors. Once a coyote finds easy prey it will continually hunt in the area.”

I love how the cat ladies and doggie parents are more worried about a random coyote than they are about junkie burglars and sex offenders who took over the parks.

Just out of curiosity, are you really THAT much of an ass?! Guess another brain-damaged Trump supporter snuck into the neighborhood.

To be fair, the Sockpuppet doesn’t live in the neighborhood. He’s likely some eastsider that listens to conservative talk radio, reads MyNorthwest and has taken it upon himself to try to convince people that Seattle sucks, one sockpuppet blog post at a time. In his deranged mind, he probably thinks he’s a hero.

Yeah no conservatives live in Seattle. Ok, Truth. Have another bong toke there

More like no conservatives that spend their every waking moment shitposting on neighborhood blogs under many sockpuppet names about how terrible they think Seattle is, despite being wrong 101% of the time.

Hah, I keep calling them and like always your awful takes are 100% wrong!
Nice liberal parody.
Needs more “muh racism” and “muh patriarchy” though.

Thanks for your “contribution”. You are really turning heads with your blog comment posts!

ACKSHUALLY it looks like people are finally speaking up about the junkie criminal invasion and the idiocy at City Hall. If these comments didn’t hit the mark, we wouldn’t take so much flack.

Keep up with the social justice crap, it’s as doomed as disco now that you guys not only oppose any and all traditional culture but also reason, logic, humor, AND ruined your own Liberal Mecca(!) despite many years of pleasant, well intentioned warnings from us compassionate conservatives. Will be even funnier in a few yrs!

People have been trying to solve or at least make a dent in the homeless crisis. It’s the “compassionate” people like yourself that are there to obstruct progress at every corner and then blame everyone else, but yourself, when the problem perpetuates.

Do you instead mean that you and your dozen or so ilk are finally coming around to join the rest of the City and stop obstructing solutions? Doubtful, but feel free to keep thinking of yourself as some kind of hero!

No, in fact, the only “solution” has been a bunch of virtue signalling idiocy that resulted in higher taxes and ATTRACTING junkies from across the west. The Jungle in now all over North Seattle. You guys are inept clowns. Seattle Democrats defending the “Homeless Crisis” response sound pretty much like Republicans when they defended the Gulf Wars. Pathetic.

I’d ask you what your solution is, like people have been asking you over and over again, but we all know that instead of posting your idea of a solution, you’ll post something about the “liberal, cuck, soyboy, ex-librarian, fur baby, progressives” instead.

This has a lot to do with Trump right?
Come on already people wake up! You’re participating in a game where we all lose. So long as we keep arguing over D’s and R’s nothing will change.
Wake up!
Let’s start the real revolution

What time is the rally and march from Seattle Central to Westlake for all of our oppressed coyote sisters and brothers?
Will this patriarchy EVER END?

The rally is tomorrow at 1:30.
But everyone that’s contributes to society will be at work….. should be a big turn out! Ha

This person shouldn’t have tried to shoo them they were hungry & hunting usually one is in front trying to get things to follow or chase and the one following kills from behind.
Defiantly not safe to let cats out at night.
The biggest problem is the dirty idiots who insist on caged chickens. They also bring rats along with coyotes (- hence the dirty idiot comment. ) This should not be allowed in King County in a residential area for the good of everyone including wildlife and animals 💕

Coastal liberals have this weird fetish with farm life. Unfortunately “actual” rural life now includes meth addicts in RVs, so we have those in Seattle, too. Being a chicken farmer is “low class animal exploitation” but “RAISING HENS” (right, ladies?! You go grrrl!) in your precious overpriced yard is a status signalling virtue exercise of “wokeness” to display on InstaBook. Farm work is dreary but necessary, and banjo music is awful.
A clean shot would solve the coyote crisis. That’s why farmers have rifles.

Likely the most ignorant comment I’ve read on this blog and that says a lot.

My chickens EAT rats. I’ve seen this happen on more than one occasion. Their coop is cleaned frequently and does not draw more rats than any of my neighbors.

Why not point the finger at the real idiots– those that let their cats outside for the night?

Some people just don’t get it

On the one hand you’re an urban chicken freak – BUT you do get points for cat bashing.
1.5 stars

Omg, that’s my dog that got loose out of my yard the otherday, it’s not a coyote, it’s s German Shepard / husky mix! Any more recent sightings would be appreciated, we’re really worried about her, especially as she just went into heat.

What is the world coming to with dogs now running false flags to scare cats about the coyotes?

That bitch is in heat?

Enough with the coyote stories. It’s ridiculous. We share our neighborhood with glorious wildlife. There are green belts nearby. There are so many other problems in our neigborhood that involve people.

Yeah.
Keep your cats and chickens and dogs inside and the coyotes might get hungry enough to chase away the homeless!

At what point are there too many coyotes in our glorious wildlife urban utopia that it requires WA Fish and Wildlife officials to come in and thump a few? If you are an outdoor cat owner, perhaps you think we are at that point, before fluffy disappears, or maybe already has.

IT IS VERY C OMMON FOR A COYOTE TO FOLLOW DOGS…….DOGS AND FOXES ARE SEEN AS COMPETITORS TO THE COYOTES DESIGNATED HOME RANGE AND THEY WANT THOSE DOGS AND FOXES OUTED!

THEY ARE NOT AFTER PEOPLE

We need the Coyotes…….too many Toto,s here in Ballard and greenbelts is freedom for all and the good old American Coyote but not the 2 leg ones at Commons park , St. Luke’s, library and metro Ballard market St…..ha ha

direct them to homeless encampments

Coyotes are dangerous predators and need to be removed. It is the towns job to maintain public safety. Urban coyotes stalk and attack not only pets, but people, children on a national basis-there are daily media reports on pet attacks and a human is reported attacked weekly on average. Do not believe Animal Rights propaganda that coyotes do not attack humans. Urban coyotes have become progressively more aggressive and dangerous and will not only jump into yards to kill pets, but will rip dogs off of leashes and kill them while the owners are frantically trying to save them. They will grab kids and try to drag them out of their parents’ arms. They need to be removed and kept removed. “Co-existence” is an idiotic animal rights policy designed to generate donations from emotional, gullible animal lovers and this policy has led to the coyote overpopulation and dangerous situation we have now. They are not fuzzy pets, they are dangerous carnivorous predators and pack hunters. Further on the East Coast, there has been a serious uptick in the incidence of rabies in the coyote population. The USDA will send in Federal Trappers to remove coyotes and keep them removed. Residents… Read more »

Don’t be too rational. This is Seattle, land of fuzzy feelings.

The concept of “the coyotes were here first” is patently absurd and again is PETA fake information. Humans predate coyotes, but that is irrelevant.

Coyotes have been on the American continent for 6 million years, when humans were just beginning to diverge from Chimpanzees in Africa. The earliest evidence of human settlement in the Americas is about 16,000 years old, but human likely first started migrating around 20,000 years ago.

So yeah, unless you’re going to pull some Adam and Eve in the Garden of Eden crap, your post is a bunch of BS and strawmen.

Yet Truth lives in a city and not in a yurt in the forest. Cities have been around since what, Mesopotamia, and yeah you don’t let predators run around unchecked. Same for predatory humans. People learned this 5-6000 yrs ago, but folks like you never did, apparently.

Thank You for the information. Why does everyone have to be so negative about everything? He was giving us helpful information.
I wish we had seen this 2 weeks ago.