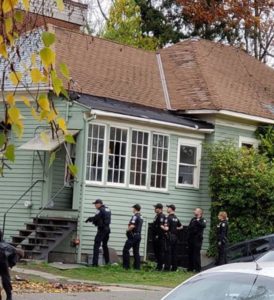 Police arrived at a residence near 11th Ave NW and NW Market St on Thursday afternoon to arrest an individual on a warrant, but ended up finding multiple people who had arrest warrants.

When My Ballard called Seattle Police, they still didn’t have an exact figure on how many were being arrested, but that it was several people who were all inside the residence (1103 NW Market St) at the time. They’re currently compiling a list of the different warrants each person had.

Police blocked off part of the streets surrounding the house, and several people posted updates on the My Ballard Group.

Philip Lynn Pujante Washington, who lives across the street, said he often saw people coming and going from the house. He said the tenants were awaiting eviction, and that he wasn’t surprised to see the raid.

Photo posted by Michelle Sarraillon Gregg in the My Ballard Group

Next, clean up the mess off Leafy and 9th

From Seattle Police Twitter: “Suspect arrested Tuesday morning in the 900 block of Leary Way NE in connection with a string of mail/package thefts and break-ins.”

I walked by that house a while back and someone there thought I was a cop and started freaking out then apologized when he realized I was not.

“Hey you, copper! Buzz off, ain’t nuthin’ goin ahn in here!” LOL, he apologized when he realized you weren’t a cop. Like, wow, that level of paranoia certainly cements that some wacky criminal stuff was going on in that house! Criminals are so stupid.

Just a tip of then old iceberg here folks. I bet they’re good solid dummycrats though. I bet they’re all out by now, planning the next big heist. Catch + release is supposed to be called fishing.

Wonderful. Thank you SPD and concerned citizen who busted them. We need more of that.

Huh. I guess elenchos will be out of action for a while.

What time is the candlelight vigil for these valuable community members cruelly persecuted by the forces of patriarchal oppression?

Oh snap, we get to organize with a candlelight vigil? Do we get to blame toxic masculinity and the stifling oppression of gender roles as reasons why these fine, upstanding, and vulnerable community members turned to crime? I haven’t blamed anything on white patriarchal privilege in hours! Damn, if only we could find out their arrests were racially motivated too, we’d have a trifecta…except I now have come to learn that trifecta is limiting to the ‘alternative numbers’ we now have to adhere to. I’ll check my privilege and ignorance, along with my matches!

It’s a win-win.
The social justice loons can blame the crime on “toxic masculinity” even if these cretins were products of single parent (single mom, really) households. Think these guys had a stern dad at home as kids? Betcha a bag of meth they didn’t!

Not to worry though. After one of these guys realizes the real money in Seattle is in “activism”, s/he will “reform” and get on some police review committee or get paid to tell teens to wear condoms.

I watched a lot cops carrying a lot of bikes out of that house.

Yeah. I bet they “bought them on Craigslist” just like the junkie hobos riding $1000 road bikes on the sidewalk that are 2 sizes too big.

13 down votes lol. These are your neighbors Seattle. Lol.

Dear Seattle Police,
Have you guys thought about, I dunno, maybe JUST RUNNING THE ID’S OF THE JUNKIES IN THE PARKS AND RVs?
I know this is some complex, particle physics stuff here. Hope we can get enough geniuses together to solve our “letting criminals take over the streets” conundrum.

You can’t run my ID! That’s symptomatic of your white privilege! Help help I’m being oppressed!

Progressives are nonstop rules, regs, taxes, and bureaucracies but then they do this corny “muh personal freedom” routine to defend the rights of…JUNKIES.
They all work for tech (big data) to boot! Muh surveillance state
The SPD has their stupid “crime map” but can’t be bothered to just run plates and licenses of the hobos or simply walk the beat in shi**y areas to keep the trash on their toes.

The police do what they are allowed to do ! They don’t like the rules any better than we do ! If the police mess with low income people they get in trouble !

The police do what they are allowed to do ! They don’t like the rules any better than we do ! If the police mess with low income people they get in trouble !

Birds of a feather all flock together ! Good job officers ! Keep up the good work !

I live in the Gilman Court apartments on 11th and 54th and have seen this place turn into a flop house over the last year. On more than one occasion I have found needles, empty alcohol containers and young people (very young) coming and going or just flopping on the street at the business (now for rent) next door. I called the police months ago (last spring) when I came home around noon and saw four adult males carrying an unconscious female into the house. The police officer I spoke with was pretty rude to me saying I was judging the appearance of the people frequenting the house till I told him about that particular incident. The residence at the Gilman Court have been experiencing break-ins on porches and in cars since this house got it’s new tenants. The owner of the house has been called over and over. The former tenant of the business next door had to move his business and had notified the home owner several times. It’s been a problem for a long time. I came home yesterday and it was back to business as usual over there. I hope there’s going to be a change… Read more »

eight down votes and counting…. what wonderful neighbors we have in Seattle. No wonder so many people are autistic in Seattle.