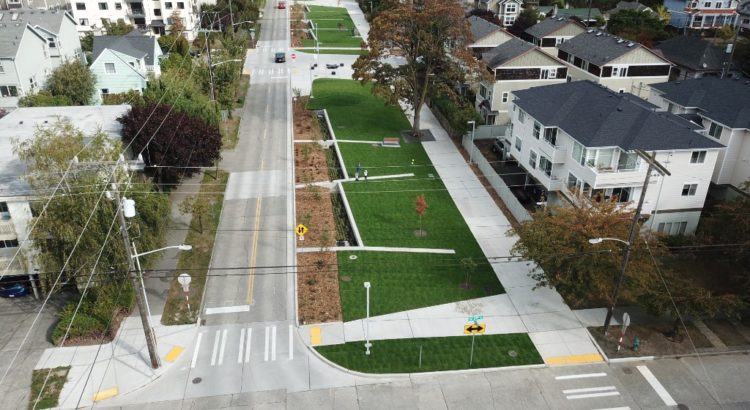 The people behind the idea for the little park that took nearly two decades to come to fruition are being recognized by city for their volunteer efforts.

The East Ballard Community Association has received one of the Seattle Parks and Recreation’s Denny Awards for outstanding volunteer service for their work in creating Gemenskap Park on 14th Ave NW. The awards are given to volunteers, “who donate precious time and energy to improving Seattle’s parks and recreation programs.”

The idea for Gemenskap Park was broached the early 2000s by members of the East Ballard Community Association. With a vision in mind to transform 14th Ave NW into a green space, the group applied for a Seattle Department of Neighborhoods Matching Fund grants for the visioning and planning process. They later applied for and received funding from the 2008 Parks and Green Spaces Opportunity Fund, designed to support community-initiated projects.

“Today, because of the dedication of EBCA members, we have a new park that converted two blocks of 14th Ave NW from existing roadway and parking median to a linear community park, providing green space and green infrastructure that incorporate safety improvements for pedestrians, cyclists and vehicles,” Seattle Parks department says.

Other Denny Awards were given to Leslie Whitman from the Amy Yee Tennis Center, Sharon Baker for her habitat work at Lincoln Park, Timothy Crosley of The Licton Springs Blog,  Lhorna Murray for her advocacy work with Magnuson Park communities, and Maisha Barnett for her park and greenspace advocacy.

I love the road and driveway going right through it. Brilliant! They will force the kiddos to play more carefully. Maybe they can hand out park user Darwin Awards once a year.

Why is everyone calling children kiddos now? Is that name supposed to sound cute? Why don’t you call them what they are, spoiled, rotten, little brats that bully and tease and taunt other children and please don’t tell me that yours don’t.

“Kiddos” is the the dismissive, snarky term childless cat lady feminists use, so of course it became hip and trendy for millennial parents who read all the garbage “journalism” written in NYC/LA/DC to call their children “spawn/kiddos” etc.
Cats and dogs are the real babies. Get woke, Bam!
Apologies to Woke William and Mike O’Brine.

Growing up in a small, conservative community 30-something years ago people were using the term “kiddo”. And some children were already bullying, teasing, and taunting other children. This is not new. But welcome to the 20th century, you’re catching up with society!

Can you please make up your mind?

The park is simply unsafe no matter how quirky one might find it. Busy road with kids playing a curb away from traffic with no fence or barriers, coupled with cars driving wrong ways down the street. I won’t take my kids there. Not sure who planned this but would love to hear their rationale.

Just get a dog and pay for other people’s kids to go to community college. It’s the COOL THING TO DO!

I’d guess you can thank some schmuck landscape “architect” who doesnt have kids, isnt from Seattle, and doesnt go to Ballard

What fun can be had on a parking strip?

I agree, I like this park too. It is fun.

I sure hope the city keeps it up. They don’t maintain things or do a poor job of it. Look at a lot of our parks. Try driving down Aurora Ave where Woodland Park is. It’s a nice oasis on an otherwise desolate stretch of roadway and it looks like hell. Overgrown with weeds and leaves and debris and garbage all over the sidewalk, All the concrete walls and posts are covered with graffiti. The iron fence hasn’t been painted or repaired in over 10 years. This city sucks.

That’s one example of one park that’s abutting Aurora. Have you been to any of the City’s other parks?

They’re great, you should check them out! Try Golden Gardens, or the pocket park on 6th, or Kirke Park on 9th or the Loyal Heights Playfield.

All of these parks are pleasant and well maintained. If you actually try getting out of your car and walking or running through Woodland Park — and not just along the edge of Aurora — you’ll see that it too is a well kept, pleasant place.

If you’re going to sockpuppet on different neighborhood forums, at least change your avatar.

Possibly the biggest waste of money by Seattle to date.

I think that would be a real fight to find the biggest waste of tax money in Seattle.
Hell, it would be so hard to find a winner they would probably need to hire a bunch of nonbinary consultants.

I agree. Big waste of money. Contributes to the problem of parking, both for existing residents, and continued construction of multiple residences with no parking available. Not safe place for kids.

I live right next to this park. I have a 1-year-old and, even though there’s a little less parking and the traffic requires me to keep an extra sharp eye on the little guy, it’s been really nice to have an outside space to play with him.

Hey, neighbor! I live nearby also and while I don’t have children or a dog, my spouse and I love the new park in our neighborhood! It’s lovely to walk through and see families and solo folks enjoying the open and green space.

It is great that this group of neighbors is getting recognized for turning an underutilized part of the neighborhood into the only green space within this quadrant of East Ballard. kudos to them! Now we need to advocate for extending this park north and south with some amenities and play equipment.

“underutilized part of the neighborhood”

Guarantee the road was busier than the park will ever be. But enjoy your $3 million park with a driveway through it.

Yeah I saw a steaming pile of shit in this park the other day. Thanks junkies!

They should rename the park “Durkan Place”, you know, after her “brave dad who won ww2” she couldn’t stop tweeting about despite Jenny herself giving the city over to criminals faster than the French went Vichy.

Hey, remember back when elenchos took all those creep pics of the local kids to “prove that junkies weren’t camping there”? That was fun. Keep an eye out for that “social justice activist”, parents!

Hi, thanks for your support! Did somebody say Social Justice? Why, that happens to be our stock in trade here on the Freattle City Clowncil! Yes, social justice warriors one and all are we, and happy as can be! We’re taking your rights to give to the disenfranchised, the non-binarily gendered, the most vulnerable community members, and anyone else we think has been marginalized and oppressed…even if they don’t realize that yet! I can tell, you sound like a cisgendered white Christian male, and that makes you the absolute worst! Yes friend, you’re not welcome here in tolerant Seattle! How about you Get Woke, Friend! (C). And remember, Vote Salty, Vote O’Brine 2019!

Eat a bag of dicks, this park is a huge improvement for the neighborhood

Hey, that’s the way to represent your neighborhood! Will you be the bro with the Dick’s bag on your lap asking the local kiddies if they want some fries?

Just wait until someone steps off the grass and falls into the open storm drainage retention area in the dark, breaking a leg or cracking their head on the cement parts, and sues the City. Dumbest idea ever to combine this with a park. But, hey, that is what this City does best – stupid stuff that costs alot of money. Anybody for a $.5 million junkie bathroom at the Commons?

Its made driving that road a pain in the butt. It took away much needed parking, and its ugly. It sucks. Stop putting lipstick on a pig.

Then go drive on 15th and park your car in a garage. There, I fixed your “problem”.

I just drove down 14th a few minutes ago. It added about 15, possibly 20 seconds to my drive. Though it also required a couple of turns during which you’ll need to unlock your eyes from your phone. So there is that drawback.

Also, I didn’t notice any homeless folks out there taking a dump or children throwing themselves in front of my car, but there were some people sitting on the benches, walking a dog, and bicycling through it. What horrible things to be doing in public!

I think that this is a great park and wish that the city would “ruin” the street that I live on by creating more green space where there can be community interaction and kids can play. I know that internet trolls that don’t like to leave the house and prefer the kind of community engagement that occurs from behind a keyboard don’t appreciate the new park. But try to understand that folks that do enjoy leaving their homes and do enjoy walks and open spaces — even in the winter when it’s sprinkling (gasp!) — will use this park and appreciate the fact that it’s no longer just a parking strip. I also understand that there is a segment of people out there that that think that any City spending is a huge waste; people that don’t like the fact that building new features that make this City a better place to live do cost money. But it’s clear that those people are in the minority (even if it’s a crude, vocal minority) and that building this park and others like it has broad community support. So thank you to the neighbors that made this happen! I look forward to… Read more »

LOL What makes it different from any other parking strip?

I know you’re just trolling since you’ve posted the same thing several times. But have you seen it? Have you actually gone and looked at it?

If you had, your eyes and brain would tell you that it’s far, far larger. Much like other parks it has features such as large grassy areas and benches. I’m standing here looking at my parking strip right now. I’ll give you the fact that it’s a grassy area, but that’s where the similarities end. I don’t know what your parking strip looks like, but mine is a small, thin strip with cars parked next to it. I dissuade my children from throwing a baseball on it. They can’t throw a frisbee on it or play croquet or some other yard game on it. They can run on it, but only for very short distances. It’s not particularly great for riding a bike. There are no benches on it.

Guest
Be a Real City

An insult to working people citywide who depend on vehicles for their livelihood. Shortsighted and neglectful. The needs of delivery people, craftsmen, elderly people, families are all ignored to create a pointless exercise ignoring traffic issues.